abdominal pain in kids tied to anxiety and depression as adults

ABDOMINAL PAIN IN KIDS
ANXIETY AND DEPRESSION AS ADULTS 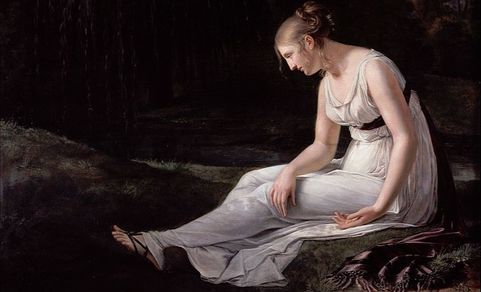 “Melancholy” by Constance Marie Charpentier, 1801
Notice that the quote at the top talks about, Functional Abdominal Pain.  What does this phrase mean?  What is a “Functional” health problem?  It is critical for your health and the health of your family that you understand the difference between functional Problems and Gross Pathology.  In a nutshell, the medical tests will all be negative in persons with pain or other symptoms caused by FUNCTIONAL PROBLEMS.  The individuals in this study on Childhood Functional Abdominal Pain were anywhere from 2.5 – 5 times more likely to suffer from Anxiety and / or Depression (September 2013 issue of Pediatrics).  Furthermore, upon followup (the age for followup was anywhere from 12 to 32 — average age, 20) …………..

Truthfully; knowing what we know about the relationship between the GUT AND BRAIN, should we be surprised by these sorts of statistics?  I should say not.  In fact, it is probably about exactly what one would expect to see.  Let’s step into a time machine for a moment, and go back fifty or sixty years. People were not swimming in an ocean of ANTIBIOTICS (from both the MEAT they ate and the doctors they visited).  Most people had a GARDEN, and spent time working in the soil (the same bacteria most commonly found in organic soil should be found in your gut as well).  If you were admitted to the hospital for anything, the first thing you got was an ENEMA.  Why?  The medical community still understood that a clean bowel helped people heal better / faster —- no matter their problem.  And while people were certainly clean, they were far less likely to be OVERLY CLEAN like we tend to be today.

If you want to get a handle on any sort of Chronic Illness (including DEPRESSION or AUTOIMMUNE DISEASE), you need to first get a handle on GUT HEALTH.  Gut Health is so critical to overall health that I created a website called ENDOGUT (the relationship between the Endocrine System, the Immune System, and the Gut) to help you understand how it all works together.  And none of this even begins to address the issue of LEAKY GUT SYNDROME.  If you are suffering from Depression, Anxiety, GI Disorders, or a wide array of health problems that could potentially fall into the category of “Functional“, take a few minutes to read the links (AS WELL AS THIS).