COUGH MEDICINE FOR KIDS?
NOT UNDER ANY CIRCUMSTANCES! 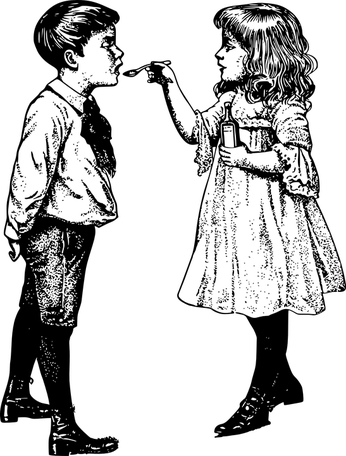 OpenClipart
Most of us have taken cough medicine at some point in our lives.  Many parents routinely give cough syrup to their children.  They are probably not aware of just how dangerous this practice really is.  Not only are numerous deaths reported each year, these cough medications have been proven over and over and over to be no better than a placebo at halting COUGHS.

As recently as a few years ago, Pharmaceutical Companies were touting medications like Toddler’s Dimetapp, Triaminic Infant, and Little Colds —– many with pictures of babies on the label.  They said that the medications were “safe” if used as directed.  Of course that’s what they said, but is it really true?  You know it’s not!

Parents; if you have been paying attention, you are already aware that the FDA has recommended that no children under the age of two be given cough medications.  In January of 2008, the FDA “strongly recommended” that OTC cough and cold medicines not be used for infants and children younger than two.  America is talking about raising this age to six (Canada has already done this), and Britain (already at 6) is contemplating increasing their recommendations all the way to age 12.  Why is this happening?  Much of it comes down to narcotics.

Cough Syrups work because they contain NARCOTICS — mostly HYDROCODONE or Codeine.  They essentially suppress coughs by depressing the central nervous system.  Too much depressing the CNS has caused the deaths of thousands of infants and young children (and probably a significant number of older children and adults as well).  It also caused the arrest and ultimate failure of one multi-million dollar quarterback —- JaMarcus Russell; the infamous first-round washout of the Oakland Raiders.

When I first heard about Russell’s arrest, I was not surprised.  He had proven himself to be a fat, lazy, oaf — a prime example of the absurdity of throwing tens of millions of dollars at an athlete that has unlimited physical potential, but no interest in winning or keeping their lives in order.  I was certainly not surprised by the fact that he was busted for drugs. What I was surprised about was the fact that his drug of choice was cough syrup.  Yes, cough syrup.

Cough syrups containing Codeine or Hydrocodone are mixed with 7-Up, and then sweetened with Jolly Ranchers to make something called “Purple Drank” (yes, that’s how it’s spelled) aka “Sizzurp“.  Apparently, this is a huge and growing problem in many parts of the country —- especially in the South.  A 2004 study by University of Texas Medical School showed that over 8% of Texas high school students had used codeine-based cough syrup to get stoned.

Like I said, do you really want your babies taking this stuff? Come back for Monday’s Blog on taking care of coughs naturally.  And while you’re at it, forward this message on to someone you know needs it.  You can also spread the word by liking us on FACEBOOK as well.