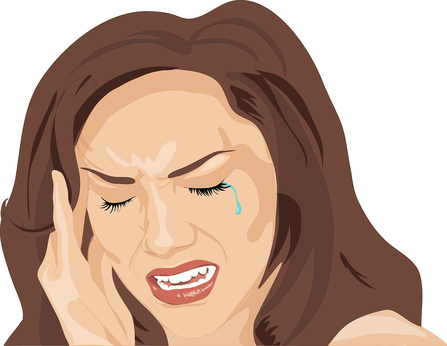 Luisa Munoz – Holyoke/USA – Pixabay
Headaches are thieves — thieves that rob you of your life wile holding a gun to your head.  They drain away your last drop of energy, leaving you with nothing but pain, misery, and an inability to perform even the most mundane daily tasks.  Your life has been turned upside down by the relentless pounding in your head.  You cannot function. Your family life is a wreck. When the headaches hit, the only thing you can do is to lay in bed with the curtains drawn and hope that everything remains silent.  You are sick and tired of being sick and tired.

You feel like you have tried everything there is to try.  You have had more tests than should be legal.  Everyone tells you that other than these “Migraine Headaches” there is really nothing wrong with you.  You feel like you cannot go on.  Allow me to give you some hope.  I believe that there is an answer to everyone’s problem —- it is just a matter of finding it.  Find what is causing your headaches, and you can begin to take your life back from the thief.

Believe me; you are not alone in your suffering.  An estimated 1 in 6 Americans suffers from regular (daily) ﻿HEADACHES﻿, with MIGRAINES affecting nearly 10% of our population.  And what does the medical community have to offer you besides drugs?  How about more drugs?  How about “new” drugs or “different” drugs?  But the problem is, you have already tried these drugs.  In fact, you have tried just about everything there is to try.  Maybe it’s time for a new approach.

What about an approach that attempts to uncover the cause of the headache instead of simply covering symptoms? Makes sense, does it not?   It’s time to start taking your life back from the thief.

WHAT ARE MIGRAINE HEADACHES?

Like almost all NEURO-ENDOCRINE / IMMUNE SYSTEM ISSUES, women are affected much more frequently than men (4 to 1).  When symptoms strike, they usually last for at least 4-6 hours and can hang on as long as several days.  Although there are a wide variety of symptoms associated with Migraine Headaches, there are two that stick out above all the others; throbbing pain, and relentless nausea.  A list of other common Migraine symptoms includes:

Prodrome
One or two days before a migraine strikes, many people notice subtle changes that might tip them off that a Migraine is on the way.  These include, but are not limited to:

Aura
Although most Migraine sufferers experience their headache without an “aura,” about 30-40% of the Migraine community experience this phenomenon. Auras are usually visual disturbances, but can manifest as sensory, motor, or verbal dysfunctions as well. Each of these symptoms typically begins gradually, builds to a crescendo over several minutes, then lasts up to 30 minutes. Examples of aura include:

Note that many of these symptoms are the same that you will see in a stroke.  If you feel anything out of the ordinary —- particularly a significant worsening of motor function, call 911 immediately.

Postdrome
This is what happens after the Migraine Headache is gone. In the same way that people who have been through a seizure feel exhausted, people who have had a Migraine Headache may feel drained and “washed out” as well. As you can imagine, the whole cycle is not only physically draining, it is also emotionally exhausting; frequently leading to anxiety over the next headache that the suffer knows will be coming soon.

Triggers
Be aware that a “trigger” is not necessarily the same thing as the “cause”.  It is the thing that sets the cause, whatever the cause may be, in motion.  Common triggers are stress, anxiety, hunger, fatigue, lack of sleep / insomnia, certain chemicals, smells, female hormonal issues, as well as numerous others.

You have learned a little bit about Migraine Headaches.  Great!  But figuring out what causes Migraine Headaches is where the rubber meets the road!  It is one thing for a doctor to tell patients that the headache is caused by irritated nerves, or constricting blood vessels / dilating blood vessels, but if they cannot figure out why these things are happening, how can they ever expect to provide a solution for the headaches?  They can’t.  Not ever figuring out “why”, is the biggest problem with the medical approach you have been using for the past who-knows-how-many years.  As long as the brain-scan is clear, “why” is the question that, most of the time, remains unasked.  And not asking the question, or least attempting to answer it, leaves you perpetually covering symptoms instead of addressing underlying causes.

It is critical to remember that the “official” names of headaches and their symptoms are often blurred together  —– i.e. “Cluster” migraines, “Stress” Migraines, “Hormonal” Migraine, “Opthamologic” Migraine, “Retinal” Migraine, and on, and on, and on.  Some of these are considered to be “true” Migraines, some are not.  Although practically every doctor under the sun will tell you that no one really knows what causes severe headaches (whether they are technically “Migraine” or non-migraine headaches), this is not totally true.  We know that people who suffer with severe headaches will almost always have one of their two components —- sometimes both.

The Neurological Component consists of neruo-vascular abnormalities (most revolve around something called “SYMPATHETIC DOMINANCE“) as well as being associated with altered levels of Neurotransmitters (usually SEROTONIN).  Sometimes these neurological conditions are due to SUBLUXATION. The Metabolic Component is characterized by increased levels of the group of Immune System chemicals that we commonly refer to as “INFLAMMATION“.  Be aware that sometimes the lines between these two components can become blurred.

Understanding Inflammation is a huge factor in managing headaches, as well as Fibromyalgia and numerous other Chronic Conditions.  If you can control the amounts of inflammatory chemicals coursing through your body, you can frequently control pain and overall health (HERE is a great example that leads us into our next bullet point).  However, in the case of many Migraines Headaches, there is a very different underlying cause….

Many times, people fail to hold adjustments due to Microscopic scarring of the Elastic, Collagen-Based Tissues (chiefly FASCIA).  In fact, the “SCAR TISSUE” is a major, but almost universally overlooked, cause of Headaches that I would categorize as being under the “Neurological” heading.  I am not going to quibble about whether these headaches are, according to “official” classification schemes, truly Migraine Headaches or some other kind of severe headache. Like one of my professors used to say, “Call it Banana Boat for all I care“.  All I can tell you for certain is that I have been very successfully helping people with all sorts of severe headaches using a form of advanced / intense Tissue Remodeling.

NEUROLOGICAL CAUSES
To say that the brain and nerve system are complex is to make an understatement of absurd proportions.  When Tissue Remodeling along with appropriate Chiropractic Adjustments do not provide a quick and simple solution to Migraine Headaches, other things must be looked at.  The first of these is the Brain and Central Nervous System.  In order to understand the battle between your Sympathetic and Parasympathetic Nerve Systems, as well as the “Brain Loop”, and the relationship to Migraine Headaches (not to mention numerous other health-related problems), please visit our BRAIN-BASED THERAPY page.

METABOLIC CAUSES
As we have already discussed, headaches (including Migraines) have lots of different triggers and causes.  However, many researchers believe that the main culprit in many headaches (including Migraines) is Inflammation. SYSTEMIC INFLAMMATION is a group of chemicals that make up part of your normal immune system response.  When these chemicals are found in normal amounts, everything seems to cruise along just fine.  However, when your body begins making too many inflammatory chemicals, an array of bad things begin to happen — one of which can be Migraines.

Another common trigger of massive Inflammation is Food Sensitivities — very specifically GLUTEN.   AUTOIMMUNITY is another major roadblock to understanding the cause of many Migraine Headaches.  This is especially true considering that a minimum of 1 in 5 Americans has an underlying Autoimmune Disease —– their body is actually attacking itself!  Some of the other common ones include BLOOD SUGAR DYSREGULATION, MOLD, CANDIDA, DYSBIOSIS, LEAKY GUT SYNDROME, POOR GUT HEALTH, PARASITES, HEAVY METAL EXPOSURE, HORMONAL IMBALANCES, THYROID PROBLEMS,  etc, etc, etc.