DRUGS FOR YOUR BUGS 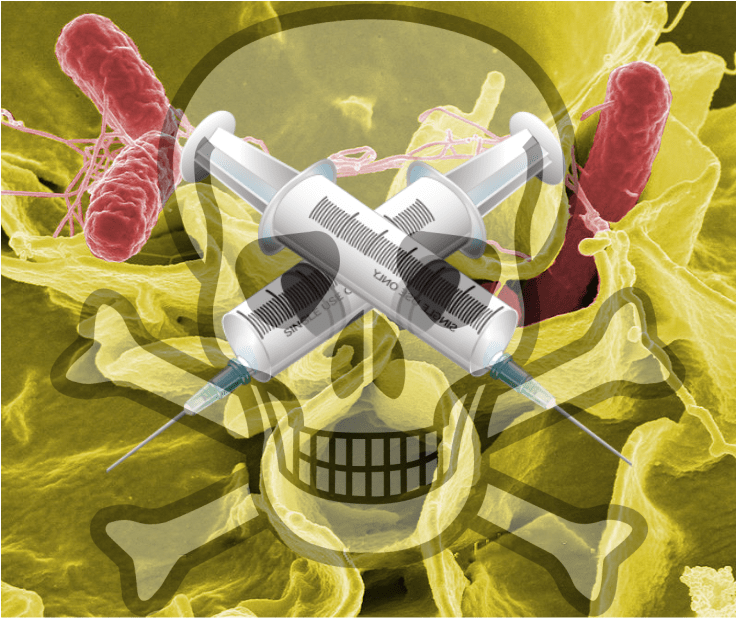 Syringes Database Center for Life Science (DBCLS)
“The risks are, however, not insignificant.  That’s because most of what happens within the gut microbiome remains mysterious. When scientists tinker with one part of that ecosystem, there’s no way to predict what else might happen.”  From the article being discussed today
When the Human Genome Project was launched back in 1990, it seemed like genetics was the only thing you heard of.  It was going to be miraculous.  Figure out the sequence of our DNA’s three billion base pairs, and we would be able solve any and all diseases.  Scientists completed the project in 2003, and not surprisingly, things haven’t quite turned out as planned.  Mostly due to the fact that our collective poor lifestyles are trumping our genetics (this is a field of study called “EPIGENETICS“).  Enter “Gut Health”

Because there’s always the “new thing” in the scientific medical community, it’s no mystery why GUT HEALTH has taken the place of genetics as the hottest area of study as far as health is concerned.  This isn’t surprising considering we’ve known for quite awhile that our MICROBIOMES are largely responsible for every aspect of our health.  On top of this, we’ve hopefully all at least heard of the healing power of FMT.  But what if we could simply pop a pill (not a “POOP PILL“) that was capable of delivering the same effect(s) as FMT?  Don’t say I didn’t warn you it was coming (HERE).  According to STAT’s Elizabeth Preston (Drugs for Your Gut Bugs are on the Horizon)…….

“As scientists learn more about the microbiome’s role in conditions ranging from allergies to anxiety to cancer, they’re increasingly interested in drugging its constituents. Two teams of US scientists have already tested those drugs in mice, and pharmaceutical companies are paying close attention. The hope is that by delivering drugs to the microbiome, researchers will be able to treat or prevent some of our most intractable diseases….    All of these approaches to microbiome-based therapies are generating excitement in the pharmaceutical industry. More investments, and more scientific advances, are likely coming soon.”

The problem we run into here folks is side effects.  Firstly, we know from scores of studies on the subject that side effects are under-reported to the proper authorities as much as 99% of the time (HERE).  Secondly, our medical community barely understands DYSBIOSIS as it is (HERE and HERE).  What makes us think that tinkering with the Microbiome will not, as the quote from the top of the page reveals, ultimately make things worse?  Case in point; antibiotics.  For all the lives that antibiotics have saved, I’m not sure there is another class of drug responsible for more human misery than antibiotics.  If you think that I am being melodramatic here, simply thumb through the titles of THESE SHOCKING POSTS.

If you want to get healthy, you are going to have to solve the issues with your Microbiome.  First, you’ll have to do whatever it takes to get off as many of your meds as possible (with your doctor’s help and permission of course).    After all, it’s not like antibiotics are the only chemicals destroying your microbiome (HERE & HERE).  That’s right folks, you’ll have to radically change your diet as well.

Although it’s drugs that cause Dysbiosis, it’s living the HIGH CARB LIFESTYLE that perpetuates and feeds it.  The truth is, if you want to get healthy (and / or get out of pain), you are going to have to tackle both sides of the coin that is Gut Health; Dysbiosis and LEAKY GUT SYNDROME (HERE).  The cool thing is that I’ve shown you how to start the process (HERE).