CHILDHOOD EAR INFECTIONS
(OTITIS MEDIA)
Everything you Ever Wanted to Know,
But were Afraid to Ask! 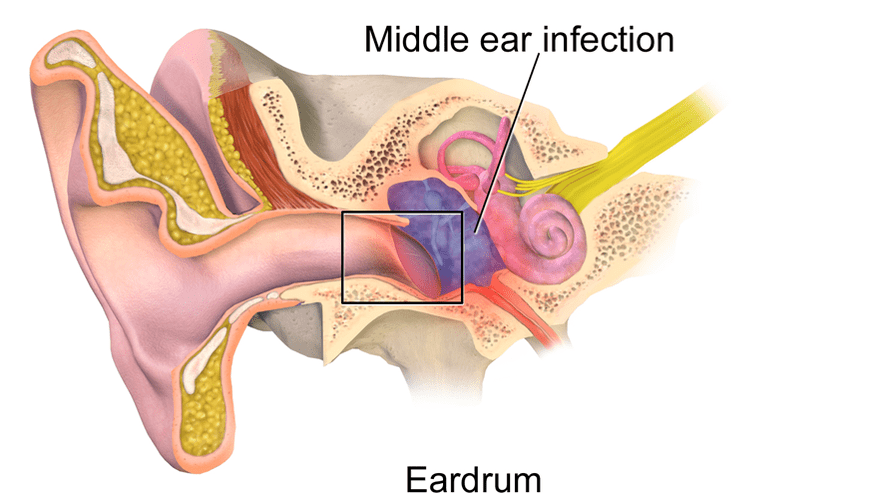 BruceBlaus
According to the American Academy of Otolaryngology — Head and Neck Surgery‘s website, “about 62 percent of children in developed countries will have their first episode of Otitis Media by the age of one, more than 80 percent by their third birthday, and nearly 100 percent will have at least one episode by age five. In the U.S. alone, this illness accounts for 25 million office visits annually with direct costs for treatment estimated at $3 billion. Health economists add that when lost wages for parents are included, the total cost of estimated treatments mount to $6 billion.“

WHY DO SO MANY CHILDREN GET
RECURRENT EAR INFECTIONS?
Let’s take a quick look at the anatomy of the ear and see 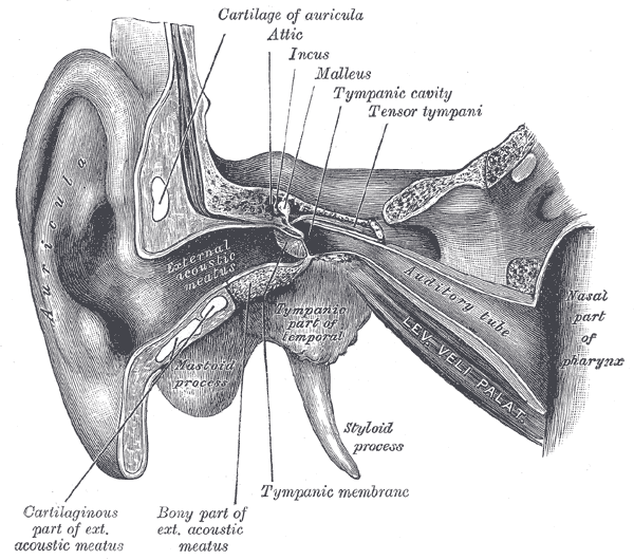 Although it is not shown in this diagram, the outer portion of the Atlas, or C1 vertebrate (the top vertebrate in the neck) rests between the Styloid Process (the fang-like protrusion) and Levator Veli Palatini Muscle.  The C1 & C2 nerves are responsible for helping keep the “Auditory Tube” (Eustachian Tube) open and functional.  When those two vertebrate are misaligned, or fail to move properly on each other, or both (SUBLUXATION), you invariably start to see problems in keeping the Eustachian Tube open.  As you can imagine, the pressure backs up into the middle ear and onto the eardrum itself.

THE EUSTACHIAN TUBE
There are four muscles associated with the function of the Eustachian Tube:

As you can see from the pictures above and below, the Eustachian Tube is the drain of the middle ear.  This should be duly noted because when ANTIBIOTICS FAIL, the next step is “Ear Tubes” (Tympanostomy).  Surgically implanting tiny plastic “Ear Tubes” through the eardrum is an extremely misguided attempt at draining the middle ear.  Number one, there is already a drain tube in place (the Eustachian Tube — see the diagrams), and number two, when tubes are installed, you have just opened up a direct pathway from the outside environment to the middle ear.  But don’t take my word for it, let’s look for a moment, at what an expert in the field says about the effectiveness of surgically implanted ear tubes.

Advocate for the deaf, Jamie Berke, states that, “However, there are questions about the effectiveness of the ear tubes. In addition, the ear tubes have surgical risks, including the risk of methicillin-resistant staphylococcus aureus (MRSA), which is resistant to many antibiotics.”  The truth is that ear tubes are associated with hearing loss (they leave scar tissue on the ear drum in 100% of cases), and frequently have to be repeated.

The bottom line is the this; tubes are used when ANTIBIOTICS fail.  Because decades of overuse and abuse of antibiotics have caused them become ineffective, they fail the majority of the time.  Oh, don’t get me wrong.  They kill infection as long as you are consuming them, but once you go off, the infection returns.  And because 80% OF YOUR ENTIRE IMMUNE SYSTEM IS IN YOUR GUT —- and antibiotics kill these “good” bacteria that make up your immune system; each round of antibiotics weakens your immune system a bit more, leaving you increasingly susceptible to infection.  It is a terrible vicious cycle.  Antibiotics kill infection (sometimes) but destroy your immune system in the process.  When you get the next infection, you are given —– yep; more antibiotics.  Repeat ad finitum!

TO BUILD A CANAL — FIRST, DRAIN THE SWAMP
The best way to deal with ear infections reminds me a lot of the story of digging the Panama Canal back in the early 1900’s.  Shipping companies wanted a way to avoid traveling all the way around the southern tip of South America, so they hired engineers to look into building a canal.  The 20 miles across the Isthmus of Panama (with a lake in the middle) looked like the logical spot.  The digging began,  and as you can imagine, the swampy terrain was home to trillions of mosquitoes —- mosquitoes that carried Malaria.

Although the swamps were sprayed over and over and over again with harsh chemicals (DDT, for instance), the mosquitoes would always return.  Finally, someone got the idea to drain the swampy lowlands.  Almost immediately the mosquito / malaria problem got much better.  Simply trying to kill bugs with chemicals is never a good long-term solution.  You have to alter (or remove) the environment that they live in.  If you or your child has suffered with recurrent ear infections, you can relate to this story.

DRAINING THE SWAMP OF THE MIDDLE EAR:
If there is already a drain tube present in the ear (Eustachian Tube) , why on earth do doctors feel the need to create another one via surgically implanted Ear Tubes?  We already know that these Ear Tubes cause hearing loss in over half the children they are implanted in.  Could there possibly be a better way to drain “the swamp” of the middle ear?  Although chiropractors have been taking care of children with ear infections for over a century, the medical community has always scoffed at the idea as “unscientific“.  Although there is a great deal of positive research on chiropractic adjustments for ear infections (EAR INFECTIONS — PART IV), the medical establishment has all but ignored it.  However, in the wake of the current world-wide “ANTIBIOTIC CRISIS” that is all beginning to change.

David Eisenberg, MD is conducting research into the role of Chiropractic in the help of chronic ear infections. This work is in progress under a grant from the Consortial Center for Chiropractic Research and the National Institutes of Health (NIH) National Center for Complementary and Alternative Medicine (NCCAM), and is helping to explain how chiropractic adjustments help so many children with chronic ear infections.  Finally, the medical community is beginning to take a hard look at what chiropractors and their patients have known for decades!

In children, the Eustachian Tubes are nearly horizontal, gradually acquiring a near 45-degree angle with age. On top of this, the Eustachian Tubes also tend to be slightly “S” shaped in children, creating potential “kinks” where mucous and fluids can accumulate and plug up the drain, leaving stagnant fluid in the ear.  For example, when you look at our beautiful CURRENT RIVER, you never see moss or junk growing on top.  Why not?  It’s constantly moving!  When you see a farm pond in August, it typically looks like a sea of green.  It has all sorts of things growing on top.  Just as the stagnant pond is the perfect environment to grow moss and “schmuck” on top, so will the middle ear grow bacteria or virus if the fluid is not draining out.

TECHNICAL STUFF
The NIH study is looking into the relationship between vertebral alignment & motion, the nerve supply of the muscles of the middle ear, and the ability of the ear to drain properly.   The nerve supply of the Tensor Veli Palatini muscle comes from the Trigeminal Nerve (Cranial Nerve V). These fibers unite with nerves from the neck to form portions of the Superior Cervical Ganglion, located between the C-1 and C-4 nerve roots.  Neurological irritation of this muscle via SUBLUXATION of these vertebrate, may cause spasm in said muscle.  When this happens, the Eustachian Tube will constrict and get smaller and smaller, until it is plugged.  Between chiropractic adjustments to the atlas (the atlas is the top vertebrate in the neck —- C1), the Axis (C2 — the second vertebrate in the neck), as well as adjustments to the ear itself, the vast majority of ear infections can be cleared up quickly, inexpensively, and without any real trauma to the children (Antibiotics, shots, Ear Tubes, etc).

I saw Brent for the first time when he was four years old.  He and his parents were living a nightmare, because of his struggle with chronic ear infections from infanthood.  His middle ear was so chronically infected and  causing so much internal pressure, that his eardrum would rupture, releasing a mixture of pus and fluid.  He would come home from daycare with wet and crusted cheeks and shoulders due to the constant ear drainage.  Betty and Steve were practically “living” in the Pediatric Ear, Nose, and Throat specialist in Springfield, who had essentially thrown up his arms and told them that there was little else to offer Brent.  Because I attended church with the Hockmans and had heard about their situation, I approached Betty and Steve and suggested that they bring him to see me.  Of course they were skeptical —- just like you are.  It’s OK.  I understand your reserve. Watch this amazing testimonial.  And feel free to speak with Betty Hockman CPA, her husband Steve (who owns Mountain View Lumber), or Brent himself, who is now in his early 20’s.

Connie Rabun (now a stay-at-home Homeschool Mom in the Hartshorn area) is a Certified Trauma Nurse (RN) as well as a Respiratory Therapist.  I treated her (then) three year old daughter 8 years ago for chronic ear infections.  What Connie forgot to mention in this video is that her daughter’s doctors were threatening she and her husband Wade with turning them over to the State of Texas Division of Social Services.  Why?  Simply because they were trying to hold off doing a Tympanostomy (Ear Tubes) on their daughter (Connie, being a nurse, was all too well aware of their MISERABLE RECORD).  Watch as a “medical insider‘ shares her family’s powerful testimonial about the failure of the medical model, and Chiropractic’s amazing results with Chronic Ear Infections

If you, a child, or loved one, suffers with chronic ear infections, you owe it to yourself to send them the link to this blog.  There is absolutely no reason for you or your child to live through what the Hockmans, the Rabuns, and millions of other American families have lived through concerning childhood ear infections.  By the way, come back next week because there are three more parts to this series on ear infections.