GLUTEN AND ACNE
IS THERE A CONNECTION? 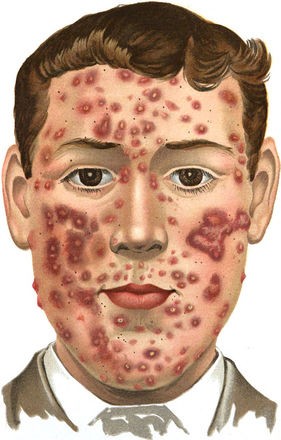 For those of us who have dealt with acne at some point during the course of our lives, I don’t have to tell you it’s a bummer.  According to the American Academy of Dermatology, acne is the single most common skin problem in America, affecting about 1 in 6 people at a cost of over 2.5 billion dollars a year.  Also according to the AAD, about 40% of teens have acne that needs to be treated by a dermatologist.  I have nothing against dermatologists, but I would argue that this number is absurdly high — particularly in light of the most common treatments.

We all know about the over-the-counter acne treatments (pads, washes, lotions, etc), but what are the treatment options that would be offered by a medical doctor or specialist?  Because the majority of acne occurs in the female population, one of the first things that will be tried is Oral Contraceptives (“The Pill“).   Without getting into all the potential short-term and long-term side effects of putting synthetic hormones (XENO-HORMONES) into your system on a regular basis, suffice it to say that going on The Pill is not something that I would recommend for anyone; acne or no acne.

There are several topicals that may be prescribed as well.  Most of these involve one or more of three different substances;

VITAMIN A BASED PRODUCTS
There are about a dozen or so different Vitamin-A based topical products used to treat acne (the most well known is probably Retin-A).  These products work by speeding up cellular turnover.  The main side effects of this class of drug are increased incidence of sunburn, and birth defects —- particularly defects of the SKULL.  That’s correct; do not take these drugs if you are pregnant or could become pregnant. This is particularly true of a product called Isotretinoin (brand names include Accutane, Roaccutane, Amnesteem, Claravis, Isotroin, and Sotret).  These drugs are known to cause severe birth defects as well as IRRITABLE BOWEL SYNDROME (not to mention Crohn’s and others that are intimately related to LEAKY GUT SYNDROME).  Other side effects include dry eyes, dry mouth, dry lips, dry nose, dry skin (all indicative of SYMPATHETIC DOMINANCE), itching, nosebleeds, muscle pain, sun sensitivity, poor night vision, HIGH CHOLESTEROL, high triglycerides, increased liver enzymes, DEPRESSION, as well as a slew of others including suicide).  In fact, these drugs are so dangerous, that in order to take them one must agree to be part of an FDA-approved monitoring program.

BENZOYL PEROXIDE
Benzoyl Peroxide is by far the most common of the three physician-prescribed treatment options for acne.  BP works by locally peeling the skin, which, like the Vitamin A products above, speeds up cellular turnover.  Prescription  Benzyol Peroxide products are not merely stronger versions of what are sold over the counter.  They are BP products that are mixed with the Vitamin A products or topical Antibiotics (or both).  BP is a known antimicrobial that is said to reduce the numbers of the bacteria on the skin.

ANTIBIOTICS
Antibiotics are a super common treatment for acne, whether used by themselves or in tandem with other medications. This is because acne is associated with a particular strain of bacteria known as known as Propionibacterium Acnes (P. Acnes).

In the picture on the right, you see a cut-away side view of what the skin looks like under the surface.  Although this specific breed of bacteria is considered to be part of the skin’s “NORMAL FLORA“, the P. Acnes bacteria prefer to live deep down in the pores of the skin around the hair follicle.  Their primary food source is the oily substance known as sebum that most of us hate (especially those of the female gender), which protects us from the elements (sun, wind, rain, etc).  Some of the different reasons people get acne in the first place, includes increased production of sebum (this happens at puberty) and blockage of the pores with dried sebum in the form of blackheads or whiteheads.  Blackheads and whiteheads, however, are not the topic of today’s post.  Today I want to discuss Cystic Acne (Acne Vulgaris) as seen in the image at the top of the page.

P. Acnes is typically a slow-growing bacteria.  That is, until it finds the right conditions to allow it to thrive.  By-products of the bacteria’s chowing down on sebum can mix with cellular debris and accumulate in the pores.  Couple this with INFLAMMATION, and bacterial growth and reproduction can explode (FYI: click the link to see that acne is one of the myriad of health issues that are considered “inflammatory” or caused by inflammation).  The key to finding the source of almost any health problem is to find the source of the Inflammation.  Although this accumulation of debris in the pore and the subsequent cellular damage that it can cause is typically thought to be the source of the Inflammation, there may be a host of external inflammatory drivers as well — particularly when it comes to Cystic Acne or Adult Onset Acne (or a combination of the two).

Most physicians and dermatologists will tell patients suffering with acne that there is nothing that they are doing to cause or contribute to this process — it’s just something that their body happens to do.  While this is certainly true in some cases (teens with minor breakouts), in many if not most cases of acne, it is the farthest thing from the truth.  This is why cleaning up one’s diet helps so many cases of acne.  But what about the person who has cleaned up his or her diet and is still suffering from acne?   We’ll get to that in a moment, but I would like to get back to the Antibiotic issue.

Because acne is “caused” by a bacteria, Antibiotics are one of the most popular weapon in the battle against.  The problem is that bacteria might not really be the ’cause’.  As I have said repeatedly, ANTIBIOTICS, while having the ability to save lives, have done more to destroy the health of the American public than almost anything other than our cruddy diets and sedentary lifestyles (HERE).  In a nutshell, Antibiotics wipe out the good bacteria right along with the bad.  And since 80% of your entire Immune System is made up of the good bacteria that are found in your digestive tract (not to mention the surface of your skin), the infection, whatever it may be (P. Acnes, Strep, Staph, or anything else for that matter), tends to recur despite repeated rounds of Antibiotics (HERE).

The website of the Mayo Clinic says of using antibiotics for acne, “Your doctor likely will recommend tapering off these medications as soon as your symptoms begin to improve, or as soon as it becomes clear the drugs aren’t helping — usually, within three to four months.“   Whoa!  Three to four months of Antibiotics?  Does your doctor really have any idea the harm that this is doing to your system?  And here is the thing; even if they do work (which is often the case), they will only work as long as you are taking them.  Antibiotics are never a viable long-term solution to acne.  If you don’t believe me, do some research of your own into the zany world of side effects of antibiotic use — even just a little bit (HERE).

BACK TO THE GLUTEN / ACNE CONNECTION
What if, as we mentioned earlier, you were doing everything seemingly right as far as your diet were concerned?  You are staying away from junk food and are working to CONTROL YOUR BLOOD SUGAR (IR is known to be a huge factor in acne, which is why acne has been called “Diabetes of the Skin”).  You are no longer cheating.  You are taking PGFO.  What could possibly be the problem?  Try Gluten on for size.  GLUTEN is the chief culprit in hundreds of disease processes, including acne.  Gluten, as well as other foods that many people are sensitive to, is a huge driver of occult (hidden) Inflammation.  When these people are given Antibiotics, the problem often gets worse, spiraling out of control as people end up with all sorts of DYSBIOSIS.  The next step in the equation is a GLUTEN FREE ELIMINATION DIET.  Following the advice on this link will show you how to cut both Gluten and the Gluten Cross-Reactors.

Because Gluten is involved, you cannot neglect your Gut in this matter of acne.  GUT HEALTH has been shown to be a huge factor in virtually all health problems —- particularly anything INFLAMMATORY.   At the very least, you need to take a GOOD PROBIOTIC.  Depending on the severity of your Gluten Sensitivity, you might need to follow a LEAKY GUT PROTOCOL as well.   And for those of you thinking that this “Gluten Thing” is someone else’s problem, you must remember that the majority (60%) of all Gluten Sensitivity manifests as NEUROLOGICAL PROBLEMS.

A BIT OF ANECDOTAL EVIDENCE
It’s not that I dislike scientific studies.  But the truth is, I love anecdotal evidence.  Maybe this would explain my infatuation with VIDEO TESTIMONIALS.   Truth be told, not only is there plenty of peer-reviewed research on this topic of Gluten / Inflammation (thousands of studies), but there are literally millions of chronically sick patients finding their way out of their misery by following the right dietary advice.  And yes; acne can be miserable.

On Wednesday I saw a patient who had been struggling with severe adult-onset acne, and “cured” herself with a Gluten Free / Dairy Free diet.  She did this all on her own after several doctors (including a couple of dermatologists) treated her in a manner consistent with the status quo — pills, potions, lotions, hormones (oral contraceptives), and Antibiotics —- lots of Antibiotics.  Her dermatologist actually made her feel stupid for suggesting something so ignorant as a potential relationship between Gluten and acne.  The truth is, I have seen this several times over.

One of the most dramatic cases of this phenomenon occurred in a young woman whom I have treated from the time she was a little girl.  As long as I can remember, she not only had terrible acne, but was so stiff all over I could barely adjust her.  To make a long story short, she went Gluten Free, and currently has almost no trace of the brutal Cystic Acne that plagued her for years.  She also has far less musculoskeletal pain because the stiffness in her skin and tissue that was such a problem, left her when she stopped consuming Gluten.  For more information on solving this and other common problems, take a look at THIS POST.