headaches, skull pain, head pain, and face pain:  is it all the same?

THE RELATIONSHIP BETWEEN CHRONIC
HEADACHES,SKULL PAIN, AND FACE PAIN
IS IT ALL THE SAME THING? 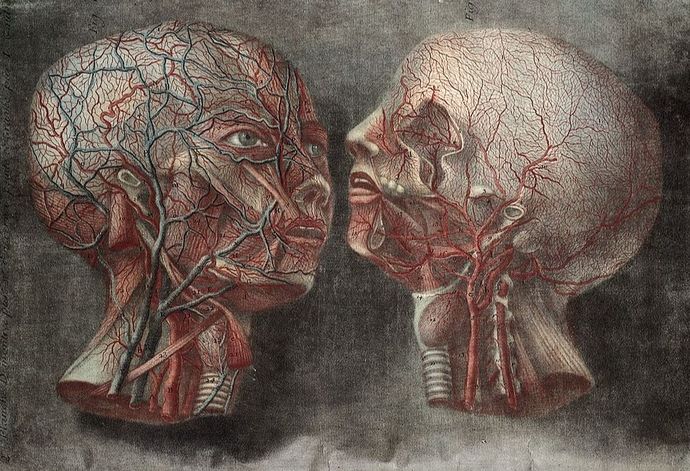 Wellcome Trust # L0023747
“Headache and facial pain are common complaints in the emergency and outpatient setting.”  From an article written by a group of seven prominent physicians for Emedicine (Facial Pain and Headache).

“Headaches and facial pain are common in the general population.”  From Temporomandibular Disorders, Facial Pain, and Headaches in the April, 2014 issue of Headache: The Journal of Head and Face Pain

“Headache and facial pain are common complaints otolaryngologist evaluate in practice.”  From a January 27, 2014  “Grand Rounds” presentation at the University of Texas Medical Branch Department of Otolaryngology (Headache and Facial Pain) by Drs. Sharon Ramos and Farrah Siddiqui

“Headache has been described as the most common medical complaint known to man.  A host of facial pain disorders can present to the chronic pain management clinic.  The most frequently presenting conditions are temporomandibular disorder (TMD), TGN, post-herpetic neuralgia (PHN), and persistent idiopathic facial pain.  Persistent idiopathic facial pain (PIFP), formerly known as atypical facial pain (AFP), is a persistent pain that does not have the characteristics of the cranial neuralgias, and is not attributed to another disorder.  The majority of patients presenting with headache and chronic facial pain have a normal neurological examination.  There is a strong association with functional disorders such as irritable bowel syndrome and psychological distress.   Pain may be initiated by surgery or trauma to the face, teeth, or gums. It is present daily for all or most of the day, without any identifiable local cause. The pain is often described as a continuous dull ache with intermittent severe episodes, affecting any area of the face….”  Excerpted from a 2008 issue of the British Journal of Anaesthesia (Headache and Chronic Facial Pain).

“Pain-associated psychological and psychosocial findings are the rule in patients with persistent orofacial pain. Unspecific adverse health effects were shown to rise proportionally with increasing pain distribution.”  From a 2014 issue of The Journal of Craniomandibular Function (Unspecific Adverse Health Effects in Patients with Orofacial Pain)

“Head injury frequently results in headache and at times facial pain. Controversy concerns the relationship of injury in the head and neck area to chronic headache, particularly when no apparent structural traumatic lesion is demonstrable. Neuropathological studies suggest with concussion there is neuronal injury without gross pathology. Closed head injury of seemingly minor degrees may lead to chronic symptoms, often stereotypic, similar to those following concussion, and they have been described by the term post head trauma syndrome or postconcussional syndrome.”   From the December 1989 issue of Otolaryngolical Clinics of North America (Headache and Facial Pain Associated with Head Injury).

“Scalp pain is a common symptom of head injury, headaches, and skin conditions. It may result from trauma to the head region, including the brain, skull or scalp. It can occur in conditions that cause headaches or skin irritation, or in more generalized conditions, such as cancer.  Trauma to the head is a common cause of scalp pain. It includes brain injury, skull fracture, or concussion, all of which may occur immediately after the traumatic episode or up to several hours or days afterward. A brain contusion (bruising) from trauma may also result in scalp pain and may indicate bleeding or swelling inside the skull.  Headaches can lead to scalp pain and to pain in any area of the face, neck or head. Several types of headaches may cause scalp pain, such as migraine, sinus headache, tension headache, and those caused by nerve involvement such as occipital neuralgia.”  From an article on HealthGrades called Scalp Pain.

“Headache and pain in the face are two difficult problems with which the practitioner of medicine must reckon. Unusual and irregular facial pain seems almost more of a therapeutic chore than the more familiar distress of headache.”  Drs. Thomas McElin and Bayard Horton from a November 1947 article found in the Annals of Medicine (Atypical Face Pain: A Statistical Consideration of 66 Cases). 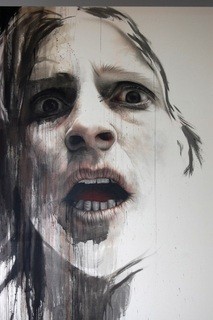 Whether it’s on my DESTROY CHRONIC PAIN site over at WordPress, or on this site, I get lots and lots of inquiries concerning pain that occurs from the shoulders up (HEADACHES, NECK PAIN, SKULL PAIN, and FACE PAIN).  Like painful situations in other areas, many of the problems seen in this region are caused by SYSTEMIC INFLAMMATION.  However, today we are going to discuss some of the mechanical issues that can lead to pain of the head, face, skull, and neck.

If you click on the links in the brackets above, or take a look at some of our hundreds of VIDEO TESTIMONIALS, you’ll begin to realize that CHRONIC PAIN has about a million and one different causes. This past Friday I saw an older female patient who has cleared up 70% of the pain from her Rheumatoid Arthritis since I saw her last (three weeks ago) just by going GLUTEN FREE.  But when it comes to pain of a mechanical origin, by far one of the most common causes is CAR WRECKS / WHIPLASH.  However, if you can dream it up, I’ve probably seen it (I once successfully treated an individual who had caused Scar Tissue formation in his neck when chains on the engine hoist he had mounted in a tree in his front yard slipped from around his ankles and gave way, allowing him fall about 10 feet to the ground onto his head.)

Although the brain and nerves can certainly be a common factor in problems like these, so can Fascia.  FASCIA is the clear, cellophane-like membrane that covers all the tissues in your body (HERE).  It also has NERVOUS SYSTEM-LIKE properties.  Not only that, but due to TRAUMA, POSTURAL ABNORMALITIES, or REPETITIVE ACTIONS, people can develop ADHESIONS / SCAR TISSUE in their Fascia.  The problem is that not only does Fascia not image well (HERE), it can be over 1,000 times more pain-sensitive than normal tissue (HERE).  I want you to notice something else as well.

If you look at the picture below on the right, you’ll notice that all of the muscles from the neck and upper back anchor in and attach to a ridge on the occipital bone that runs from the middle of one ear to the middle of the other (the bony point in the middle is called the External Occipital Protuberance).  Because of Wolff’s Law (bone grows in response to mechanical stresses placed upon it, whether normal or abnormal), people sometimes develop a large spur at the EOP or they develop tiny calcifications all along the occipital ridge.

So; back to the question asked in the title of this post, “Are all these problems essentially the same thing?”  In many cases, yes.  The thing I want you to notice when you look at a skull is just how much Fascia there is covering it.  This Fascia actually has a proper name — the Galena Aponeurotica aka the Galena Aponeurosis (HERE is a post on it as it relates to Face Pain).  Just behind the auditory opening (ear hole) in the picture below right, you will notice an arrow.  Take a look at where that arrow is pointing.  It is aimed at the origin or upper attachment of the SCM MUSCLE.

The SCM or Stermocleidomastoid Muscle is one of the chief muscles injured anytime you injure your neck, no matter how you injure your neck.  When the SCM becomes SHORTENED due to SCAR TISSUE, FASCIAL ADHESIONS, or MUSCLE SPASMS, not only will it pull on the neck itself (drawing it into FORWARD HEAD POSTURE), it will also pull on the skull’s fascial covering.  This can and does lead to “Skull Pain”, which is different than a Headache (HERE).  And as crazy as it sounds, on occasion, the opposite can occur, where the pulling actually originates in the head.

One thing I have noticed with several patients is that these people will complain that they can actually hear the restricted Skull Fascia “crinkle” (rustling leaves is the way I hear it described most frequently) when they move in certain ways.  One of the most amazing cases of this phenomenon was PAM whom I saw for a “tune up” on Friday.   Virtually every patient I’ve ever seen with this complaint has been put on psyche drugs and ANTI-DEPRESSION MEDICATIONS because doctors have no idea what else to do.

Because of the fact that the neck muscles, upper back muscles, Skull Fascia, and Cervical Fascia, connect in some form or fashion to the face, the potential for Face Pain increases with them.  Bear in mind that I am not speaking of pain such as that from problems like Trigeminal Neuraliga (Tic Delroux) or even TMJ / TMD, which is another problem altogether.  The kind of Face Pain that people get from Fascial Adhesions, while potentially being quite severe, is usually different.  Lest you deem Face Pain an insignificant problem, understand that it is more common than was previously believed.  Here are some proofs for this.

Do I have all the answers?  Heck no.  No one has all the answers.  However, I do know that staying on the same path of tests, drugs, more tests, more drugs, doctor visits, more drugs, specialist visits, and still more drugs, is not getting it done.  If it were, you wouldn’t be wasting your time reading this post when you could be doing something fruitful and productive.