inflammatory bowel disease according to the newest research 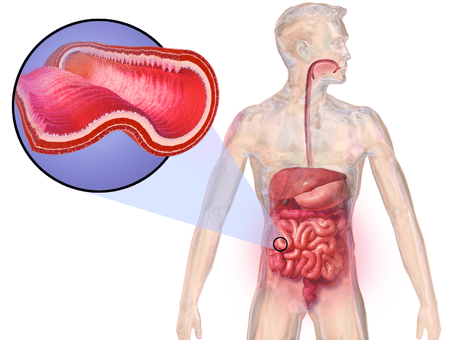 BruceBlaus
“The number of young people admitted to hospitals with serious bowel problems has soared in the past decade, and experts have warned that junk food and antibiotics may be to blame.”  Adam Withnall, from the June 19, 2014 issue of the UK Independent (Crohn’s Disease Hospital Admissions Surge 300% Because of Junk Food and Antibiotics)
According to the January 15, 2015 article on Medscape by Dr. William A. Rowe, “Inflammatory Bowel Disease (IBD) is an idiopathic [unknown origin] disease caused by a dysregulated immune response to host intestinal microflora.”  We will delve much deeper into this concept of dysregulated intestinal flora in a moment, but for now be aware that the single hottest area of medical research involves the MICROBIOME and its relationship to both GUT HEALTH and overall health.  Rowe goes on to say that, “The two major types of inflammatory bowel disease are Ulcerative Colitis (UC), which is limited to the colon, and Crohn Disease (CD), which can affect any segment of the gastrointestinal tract from the mouth to the anus.“

The most recent information from the CDC (Epidemiology of the IBD) says that, “Ulcerative colitis is slightly more common in males, while Crohn’s disease is more frequent in women. Diet, oral contraceptives, perinatal and childhood infections, or atypical mycobacterial infections have been suggested, but not proven, to play a role in developing IBD.”   If they were being completely honest, they would have — in similar fashion to the quote at the top of the page — had ANTIBIOTICS on this list as well.  You’ll understand why shortly.

The Crohn’s & Colitis Foundation of America (Facts About Inflammatory Bowel Disease) says that, “Research studies continue to show a rise in the number of people living with inflammatory bowel disease (IBD).  Approximately 1.6 million Americans currently have IBD, a growth of about 200,000 since the last time CCFA reported this figure in 2011.  As many as 70,000 new cases of IBD are diagnosed in the United States each year, and there may be as many as 80,000 children in the United States with IBD“.    Furthermore, if the May, 2011 issue of Gastroenterology (Epidemiology and Natural History of Inflammatory Bowel Diseases) is to be believed, the incidence of IBD has increased about 15 fold over the course of the last fifty years.

On top of all this, the authors of this study rain on the parade when they tell sufferers that, “Crohn’s Disease and Ulcerative Colitis are incurable.”  OK.  Maybe they are right.  But I would contend that even in the absence of a “CURE” these and similar problems can be managed and made tolerable.  The purpose of this post is to show you how this might be accomplished.

For one, SMOKING is a a huge factor in IBD.  This month’s issue of Environmental Microbiology (Chronic Cigarette Smoke Exposure Induces Microbial and Inflammatory Shifts and Mucin Changes in the Murine Gut) says that, “Inflammatory Bowel Diseases (IBD) are complex multifactorial diseases characterized by an inappropriate host response to an altered commensal microbiome and dysfunctional mucus barrier. Cigarette smoking is the best known environmental risk factor in IBD…  We infer that the modulating role of chronic smoke exposure as a latently present risk factor in the gut may be driven by the altered epithelial mucus profiles and changes in microbiome composition and immune factors.“  In English, this means that cigarette smoke is not only destroying your lungs, it’s destroying your intestines as well.  This is critical because this is where 80% of your entire Immune System is found (HERE).

It is also critical to understand that despite the fact that you will hear over and over again that IBD is “genetic,” we shouldn’t necessarily be alarmed, nor should we start blaming Grandma.  The concept of “genetics” is radically outdated when compared to what we are learning about something called EPIGENETICS.   And the simple fact that these problems are intimately related to the modernization of our society, tells us that IBD is likely linked to crappy diets — something seen in this post’s opening quote (also see the study from Autoimmunity Reviews called The Geoepidemiology of Autoimmune Intestinal Diseases).  It’s all about Inflammation and figuring out what might be driving it.

Once you understand the concept of INFLAMMATION, everything begins to make sense — especially in light of it’s causal relationship to AUTOIMMUNITY (Crohn’s and Ulcerative Colitis are both Autoimmune).  (Side Note:  Even though IRRITABLE BOWEL SYNDROME is also an “Inflammatory” Autoimmune Disease, it is not ‘officially’ categorized as one of the Inflammatory Bowel Diseases.  However, many of the same principals that apply to IBS will apply to IBD.)

There are numerous things that can drive Inflammatory responses in the body (LEAKY GUT SYNDROME, OVER-CLEANLINESS, BLACK MOLD, YEAST / FUNGUS, H. PYLORI (not enough stomach acid), or other CHRONIC INFECTIONS, PARASITES, MERCURY POISONING, FOOD SENSITIVITIES, OVER-CONSUMPTION OF SUGAR, DYSBIOSIS, and a host of others).  And because of its INTIMATE RELATIONSHIP to Autoimmune Diseases (HERE is a short list of Auto Immune Diseases), we know that GLUTEN is one of the major players in Inflammatory processes of the intestines —- even in the absence of full-blown Celiac Disease (HERE).   But all of this information is worthless if what the medical community says — you’ll never be able to get off your medicine, you’re likely to wind up with CANCER, and it’s doubtful that you’re going to live as long as your peers —- is really true.  Which brings us to the part of the post that everyone is most interested in…..

The information provided on this post and elsewhere on this site is just that — information.  It is not meant to replace the recommendations or advice of your physician or medical provider.  Nothing mentioned on this site is intended to diagnose, treat, cure, or prevent disease.    Make sure to get your doctor’s “OK” before doing anything mentioned in this post.  No animals were harmed during the creation of this post.
I’m rather stubborn.  When doctors and research experts tell me that IBD is incurable, it sets the gears and wheels in my head spinning.  Not that I am promoting a cure mind you (see the disclaimer above), but if you were to have a spontaneous remission (or even a significant improvement) that allowed you to get off some (or maybe even all) of the harsh drugs used to treat IBD — many of which are recycled Chemotherapy Drugs from years gone by — wouldn’t that be cool?

The secret to conquering any health problem is stick-to-itiveness.  You have to make the changes and give your body a chance to respond.  Work with it for three months and see what happens.  I’ll bet the farm you see a positive change.

Dr. Schierling is licensed chiropractor and world-renowned for intervention with persistent chronic pain. Dr. Schierling focuses on a holistic approach to helping end his patients’ chronic pain that includes Scar Tissue Remodeling Therapy.
All Posts »
PrevPreviousbig pharma and the failure of evidence-based medicine
Nextvaccines and your microbiomeNext