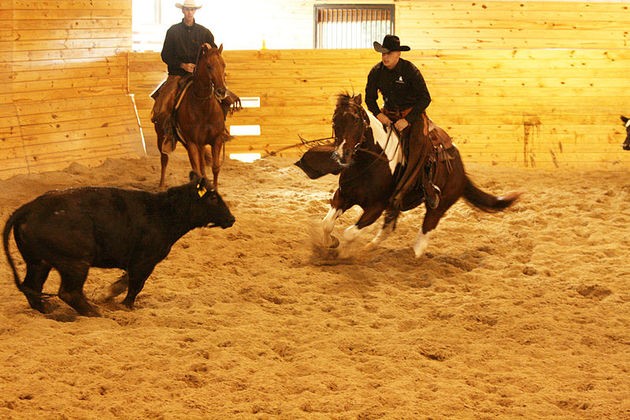 Cutting Horses are just like their name implies — horses that cut.  These animals have to be able to cut back and forth with extreme quickness in order to separate a particular head of beef from a small herd, and then keep it from going back to the herd.  The better the horse and rider work together, the less likely they let a beef get past them and back to the heard.  Many contests consist of three 2.5 minute rounds, with a total of 80 points awarded for each round.  Usually, three cattle are ‘cut’ per round (although sometimes only two).  I included a YouTube Video of Michael competing in a Cutting Horse Competition at the bottom of the page.

They call Michael “Super Cooper” for good reason.  In his career, he has taken home over 3 million dollars in prize money (HERE).  In a profession full of people born into it (most of them monied), he is the proverbial self-made man.  Not that Michael himself wouldn’t give God all of the credit, but years ago, he taught himself the art of training Cutting Horses.  He started out using techniques learned from library books on his $300 horse —- quite a difference compared to the high-dollar horses he trains today.   You see, Michael took a completely different route to success than anyone else in his profession.  Through hard work, dedication, and a natural horse talent, Michael worked himself into one of the top-ranked Cutting Horse Trainers on the planet (he now lives in Wetherford / Fort Worth, Texas).  One thing I can say about Michael is that fame and fortune haven’t changed him.  At his core, he is still a God-fearing good-ole-boy from the hills of Southern Missouri, who loves his wife and family.

Michael was in Monday with his family to get treated for SHOULDER ISSUES that are due to the repetitive nature of his work.  Sara shot a VIDEO TESTIMONIAL, but for some reason we had a problem with the picture (below is the transcript).  Thanks Michael!  You, Jennifer, and the boys have a Merry Christmas.   And say hello to Emmet and Flora Beth for me!  God Bless.

Hi, I’m Michael Cooper, a horse trainer from Summersville, Missouri. I had a horse buck me off and land — actually it fell with me, and I landed on my right shoulder. And when it did, I was unable to move the back side of my shoulder.  I thought this was just like any other injury I had been through, and that I’d just get over it.   But despite my best efforts, I couldn’t raise up my arm.  In fact, as time went on, I couldn’t even get my arm up high enough to shoot a basketball [I used to play some pick-up ball with Michael and his brothers back in the day.  They could all ‘light the candle‘].

So, I talked to doc and told him that adjustments weren’t helping this problem.  He said he wanted to try something a bit different.   He started working on my shoulder.  Almost immediately, I was able to move it better.  So he worked on it some more — and the more he worked on it, the better I was able to move it.  I thought wow, this is really amazing!  The results were immediate.

Time went by, and I actually forgot about it. So I went to see doc again and he asked how my shoulder was doing.  I told doc that it was pretty good, but that I wanted him to look at it again and work on it some more. It’s made a big difference in my range of motion — it works like it’s supposed to now.  Since I train horses for a living, I don’t get enough stretching up high [all Micheal’s work is with his arms down low on the reigns].   Through his tissue work it’s changed my overall ability to move and do my job.   It’s been awesome for me.  Thanks Doc!  – Michael Cooper, December 23, 2013

Dr. Schierling is licensed chiropractor and world-renowned for intervention with persistent chronic pain. Dr. Schierling focuses on a holistic approach to helping end his patients’ chronic pain that includes Scar Tissue Remodeling Therapy.
All Posts »
PrevPreviousa christmas gift from me to you
Nextdb and our nation’s forced vaccination policiesNext