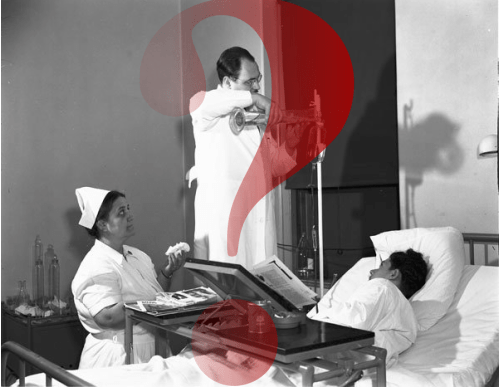 “Unfortunately, many MUPS patients seek care to find an organic disease they fear, but do not have. Doctors then may test for and even treat (non-existent) organic disease. This produces high use of services, unnecessary laboratory testing and consultation, increased costs and high iatrogenic complication rates – eg, ill-advised tests, drug addiction and trial treatments for presumed but absent organic diseases.”From the British website Patient (Medically Unexplained Symptoms: Assessment and Management)

“By contrast, traditional and complementary treatment systems describe reversible functional disturbances, and appear better at integrating the different components of illness.  As an aid to integration, pathology characterized by structural change in tissues and organs is contrasted with dysfunction arising from disordered physiology or psychology that may occur independent of pathological change.”  Cherry-picked from the abstract of the May 2008 issue of BioMed Central Family Practice (Functional Illness in Primary Care: Dysfunction Versus Disease)

As an ER doctor, MY BROTHER has some interesting things to say about the types of problems he sees on a day-to-day basis.  I have heard him state on more than one occasion that the things that all ER docs hate to see are people presenting with HEADACHES, NECK PAIN, and / or BACK PAIN.  No on likes MUPS.

If you ask him why, he will tell you that it’s largely because no matter how many tests he runs, rarely will anyone discover a pathological basis for it (HERE).  What are the problems he enjoys seeing in the ER?  I remember him telling me once that often times the easiest problems to deal with are the most obvious — fractures, burns, lacerations, etc, etc, etc.  2006’s Medically Unexplained Physical Symptoms in Emergency Medicine from BMJ’s Emergency Medicine Journal verifies this.

“Medically unexplained physical symptoms (MUPS) are physical symptoms for which no relevant organic pathology can be found. Patients with MUPS commonly present to the emergency department (ED) but are rarely considered in emergency medicine teaching or literature. Management of these patients is frequently more challenging than where there is an obvious organic pathology.“

According to CDC statistics, Americans are making in excess of 1.2 billion visits to doctor’s offices and ER departments each year, which does not count hospitalizations.  In order to get paid by insurance companies, doctors have to give patients a diagnosis.  The problem is, much of the time they have no earthly idea what’s really wrong with the patient.  Case in point is something called MUPS (Medically Unexplained Physical Symptoms).  How common is are MUPS in the US? Could MUPS actually be referred to as an “epidemic”?  Stick around and find out.

Despite the fact that few of you have ever heard of it, MUPS could be categorized as an epidemic here in America — a silent epidemic.  Although certainly not a universal viewpoint, some studies say that, “Psychiatric co-morbidity is common“.  In other words, these people are usually diagnosed with an array of mental problems.  But is this fair and is it honest?

At some point in time (usually sooner rather than later) most people with MUPS are going to be told they are DEPRESSED and put on ANTIDEPRESSANTS (despite the fact that you’ll see in a moment how unwarranted these really are for many patients).  They are often loaded up with PAIN PILLS, MUSCLE RELAXERS, NSAIDS, and CORTICOSTEROID INJECTIONS as well.  And that’s just for starters.  If you suffer with symptoms that doctors have not been able to put a finger on, you will become a guinea pig for BIG PHARMA.

According to a 2004 study published in the Canadian Journal of Psychiatry (Explaining Medically Unexplained Symptoms), we learn that, “Patients with MUPS (medically unexplained physical symptoms) comprise from 15% to 30% of all primary care consultations. Physicians often assume that psychological factors account for these symptoms, but current theories of psychogenic causation, somatization, and somatic amplification cannot fully account for common unexplained symptoms.”  In other words, the psychiatric diagnosis we saw in the previous paragraph do not do a good job of explaining “unexplainable” symptoms.  A 2013 article on the British medical site “Patient” validates this.

In the article (Medically Unexplained Symptoms: Assessment and Management), we learn that, “The terms used to describe such symptoms – medically unexplained symptoms or functional somatic symptoms – are purely descriptive and do not imply psychogenesis.”  In other words, just because no on has figured out what’s wrong with you (MUPS), does not necessarily mean there is not something wrong with you.

Furthermore, the authors quote two different peer-reviewed studies (one three years old and the other five years old) , revealing, “that a biological cause can be found for only 26% of the ten most common symptoms presenting in primary care (chest pain, fatigue, dizziness, headache, swelling, back pain, shortness of breath, insomnia, abdominal pain and numbness). Studies from around the world found that 25-50% of primary care patients presented with MUPS.”  Among the most common “diseases” associated with MUPS are FIBROMYALGIA, IBS, and CHRONIC PAIN SYNDROMES of all sorts.

When it comes to specialists, the problem is even worse.  A study from a 2001 issue The Journal of Psychosomatic Research published a study called Medically Unexplained Symptoms: An Epidemiological Study in Seven Specialties.   Listen to some of their conclusions.

“Medically unexplained symptoms are common across general/internal medicine and represent the most common diagnosis in some specialties (52% fulfilled MUPS qualifications).   The highest prevalence was in the gynecology clinic (66%).  Psychiatric morbidity per se was not associated with the presence of medically unexplained symptoms, but was more likely in those complaining of multiple symptoms.

Did you catch that?  People from this group used ALTERNATIVES (they realized that the drugs don’t work), felt their problems had a physical basis (they were not just ‘IN THEIR HEAD‘) and on top of all this, did not largely suffer from, “psychiatric morbidity.”  In other words, they weren’t ‘crazy’, despite nearly ubiquitous insinuations that they were.

There are two terms that you will see pop up repeatedly in the studies on MUPS; “Somatization” and “Functional Disease“.   Somatization is the term given to symptoms that no physical reason can be found for.  These symptoms are commonly thought to be related to stress, anxiety or depression.  This is often referred to as “Somatic Symptoms Disorder”.  In other words, your problems aren’t real; they’re all in your head.  Functional Disease or “Functional” problems are simply health issues where the body is malfunctioning in some capacity, but there is no overt pathology present and NO POSITIVE TESTS.

The bottom line is that if the scientific literature is to be believed, between one quarter and one half of all doctor visits are for symptoms that the doctor has no real clue about (MUPS) — which is exactly what was going on a quarter century ago.  A 1989 study published in the American Journal of Medicine (Common Symptoms in Ambulatory Care: Incidence, Evaluation, Therapy, and Outcome) showed that…

“A total of 567 new complaints of chest pain, fatigue, dizziness, headache, edema, back pain, dyspnea, insomnia, abdominal pain, numbness, impotence, weight loss, cough, and constipation were noted. Although diagnostic testing was performed in more than two thirds of the cases, an organic etiology was demonstrated in only 16 percent. The cost of discovering an organic diagnosis was high, particularly for certain symptoms, such as headache ($7,778) and back pain ($7,263). Treatment was provided for only 55 percent of the symptoms and was often ineffective.”

In other words, 84% of the symptoms in this study were shown to be MUPS.   It does not appear that things are really improving on this front.  And believe me when I tell you that the costs for these common problems are far more than they were 26 years ago.

Everything in this post is screaming about the fact that doctors are not using three simple words nearly enough — “I don’t know”.  Instead, they are blaming these problems on any scapegoat available — OLD AGE, stress, depression, BAD GENETICS, ARTHRITIS, BAD LUCK, etc, etc, etc.  Then they start prescribing.  Or using things like “talk therapy” or “reassurance” which have been shown to be not so effective (see PLoS One’s, Does Simple “Reassurance” Work in Patients with Medically Unexplained Physical Symptoms?).

One study from the 2013 issue of Mental Health in Family Medicine, showed authors seemingly throwing their hands up in the air in frustration as they admitted, “Patients do not always expect medication, although it is what they most often receive. Diagnostic tests, although used sparingly, can be a way to maintain and build a relationship. Drugs and tests can be a ritual statement of clinical interest in the patient and their symptoms.”

So; of the half a billion doctor visits a year that pertain to patients with MUPS, the best we can do is prescribe drugs and perform unwarranted medical tests (“rituals“”, knowing full well they will be negative?  There has to be a better way.

There is a better way.  It starts with looking at the body as a whole instead of always breaking it down into it’s different parts (something our system of “specialized” medical experts consistently do here in America).  We have to stop chasing symptoms like a dog chasing it’s tail, and figure out what might be causing those symptoms.  What are some of the chief culprits in this issue we call MUPS?  Although the list could be just about endless, I am going to give you four that I believe are ridiculously common in our general populations, both sexes, all ages.