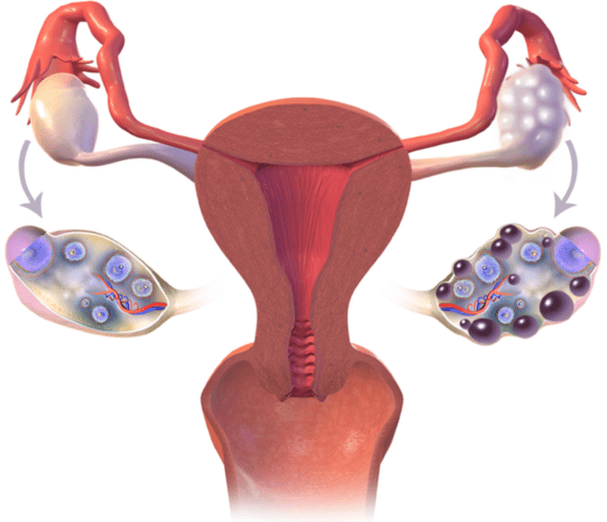 Bruce Blaus
Any time someone refers to a certain health issue as a distinctly ‘American’ epidemic, rest assured that is has a great deal to do with our diet and lifestyle.  And for my readers in other parts of the Westernized world, also realize that you are rapidly catching up.  After all, the SAD (Standard American Diet) is bad — really bad — and getting worse with each successive generation, as well as making its way to every corner of the earth.  So, what does a poor diet have to do with a distinctly hormonal problem like polycystic ovaries?   We’ll get to that in a moment, but before we do, let’s first discuss what PCOS is, what it looks like, and how to best diagnose it.  All of this is critical because PCOS is said to be the number one most common female hormonal disorder in the U.S.

You might sometimes see Polycystic Ovarian Syndrome (PCOS) referred to as Stein-Leventhal Syndrome, but simply stated, it is America’s most common female hormone related health problem.  PCOS is female hormonal disturbance that can cause any number of different symptoms.  However, because many of the women that have these symptoms have many (poly) small cysts on their ovaries, the disease was named as such.  Be aware that the presence or absence of these cysts on ultrasound does not rule in or rule out a diagnosis of PCOS.  It is critical to remember that it is the specific group of symptoms, as opposed to ultrasound findings, that definitively establishes the diagnosis.  And just what is this group of symptoms?

WHAT ARE THE SYMPTOMS OF PCOS?

Although there is a whole constellation of symptoms that may lead your doctor to think of PCOS, there are three biggies that all others seem to flow from:

Be aware that these menstrual “disturbances” can come in the form of no periods, spotty periods, heavy periods, light periods, non-stop periods, etc, etc, etc.  Basically, if you are not having a normal period, there is a good chance it is due to PCOS.  As far as high levels of testosterone are concerned; this creates women that tend to look (and often even act) more manlike.

Some of the other main signs / symptoms of PCOS include:

Just remember that the The “Unhappy Triad” of PCOS refers to three chief symptoms — symptoms that are so common that women with these symptoms are said to be “Textbook Cases”.  Hirsutism caused by excess testosterone, Odd Periods, and Obesity.  If you have these symptoms, you could probably skip the next section (but I wouldn’t recommend it).  Some of the symptoms of PCOS look like HASHIMOTO’S THYROIDITIS (Autoimmune Hypothyroid), and it is common to see women with both.  In fact, we know that PCOS is a common trigger of all AUTOIMMUNE DISEASES, including Hashimoto’s.

Here is the thing to remember about Testosterone.  Not only is this predominantly male hormone involved in the male sex drive, it also happens to be the hormone that drives the FEMALE LIBIDO as well.  The problem is that EXCESSIVE LEVELS OF INSULIN (caused by Uncontrolled Blood Sugar) drive the hormone thru the stratosphere.  To a point, higher testosterone levels can actually increase female sex drive (something that happens in some women with PCOS).  However, once that point has been reached, too much “T” has a libido-squelching effect on women.

HOW DOES MY DOCTOR DIAGNOSE PCOS?

Although PCOS is frequently diagnosed by ultrasound (see picture a the top of the page), this rarely needs to be done.  Because the best determination of PCOS is via the above symptoms, PCOS is what is referred to as a “clinical” diagnosis.  This means that you do not have to have an ultrasound, although in some cases blood work can be used to help diagnose PCOS.  This is because one of the most common features of PCOS is Insulin Resistance.  Insulin Resistance is caused by high, or more appropriately “uncontrolled” blood sugar levels.

When people eat too many sugary or starchy foods, blood sugar climbs rapidly and sharply.  The body cannot tolerate this, so it releases the storage hormone insulin to remove excess sugar from the blood and move it into the cells where it can either be burned or stored as fat.  When the body’s insulin production cannot keep up with the amount of starches or sugars being consumed, Insulin Resistance is the result.  Because the body’s insulin receptors literally become choked with insulin, these people require higher and higher levels to lower their blood sugar, and are characterized as having high levels of both glucose and insulin in their blood simultaneously — a phenomenon that is never good.

If you are diagnosed with PCOS, there is a pretty good chance that your doctor is correct.  This is simply because PCOS is so prevalent in our society.  The brilliant Functional Neurologist / Endocrinologist Datis Kharrazian says in his “Thyroid Book” that according to the most up-to-date research and statistics, the largest percentage of America’s female hormonal problems are the result of PCOS.  This despite the fact that most are never officially diagnosed.  This means that PCOS is definitely more common than the 5% – 10% that is commonly thrown around in most of today’s “What is PCOS?” articles.   Why is this a big deal.  Besides the symptoms listed above, PCOS is known to be associated with numerous bad health problems —– really bad health problems.

Yes, there are some really severe health risks associated with having PCOS.   If you follow the progression of this disease logically, you will begin to understand why this is so.  The risks include…….

I could go on, but you should be getting the drift.  This stuff is as serious as a heart attack — literally!  The four things on the list above include the #1, #2, and #7 killers in America (not in that order).   Now do you see why it is important to deal with this problem?

WHY DID I GET PCOS?

Although many doctors are still telling their patients that they have high blood sugar and associated obesity because they have PCOS, many are beginning to grasp the fact that just the opposite is true.  PCOS always starts as some sort of ENDOCRINE IMBALANCE.  And although there are about a jillion ways that the endocrine system can become imbalanced, the number one reason that women tip their Endocrine System on its head and end up with PCOS is diet-induced Insulin Resistance.  However, there are other factors that can contribute to cause PCOS as well.  A couple of the more common of these include……

HOW WOULD I BEST GO ABOUT TREATING MY PCOS?

A diet containing 25% carbohydrates improved insulin resistance, whereas a diet that included 45% carbohydrates did not.    –International Journal of Obesity and Related Metabolic Disorders; 20 no. 12:1067-1072

There are many different things your doctor may suggest you do in order to control this disease.  By far the most common is to start you on the Birth Control Pill.  They may want you on some sort of Testosterone Blocking Drug.  They often give you fertility drugs or Diabetes Drugs.  The bottom line is that all of these treatments address symptoms while doing absolutely nothing about the underlying causes of those symptoms — a common feature in the practice of Medicine.   Interestingly enough however, even the medical community is saying that drugs and surgery are not really the best choice for effectively dealing with PCOS.  What do they say works the best for women with Poly Cystic Ovaries?

It’s true.  These are the top methods of dealing with PCOS — not to mention just about every other health problem we commonly deal with.  Unfortunately, these are also things that your doctor cannot do for you.  They are things that require a great deal of discipline and sticktoitiveness.  Let me give you three excellent resources for doing what your doctor should suggest.

For a comprehensive picture of what it may take to get your body in functional order, make sure to take a look at THIS POST.  Also be aware that sugar turns men into women, and women into men (HERE).