WHAT CAUSES GOUT?
THE ANSWER MAY BE DIFFERENT THAN WHAT YOUR DOCTOR TOLD YOU 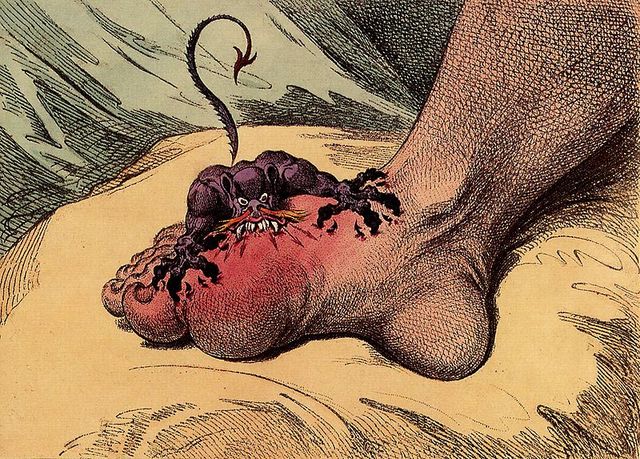 Science has known for a very long time that Gout is caused by high levels of Uric Acid in the blood.  What science seems to be a bit confused about is exactly what causes the high levels of Uric Acid.  Gout occurs when excess Uric Acid precipitates out of the blood and forms crystals in soft tissues that tend to have a poor blood supply (further from the heart).  This is why the most common places to get Gout are the big toe, ankle, ear lobe, and knee.  Although most doctors tell you that certain kinds of meats and “rich foods” (whatever that really means) are what cause Gout, there is more debate than ever concerning this topic.  As you may remember from a post that I wrote nearly two years ago (GARY AND GOUT), this view has come under serious fire in recent years.  A study that was published earlier this week dumped some more gasoline on that fire.

The study, done by the Biochemistry Department of Otago University, for the New Zealand Rheumatology Association, showed that even if you have the “Gout-Protective” gene; Caucasians (white folk) who drank four SWEETENED BEVERAGES a day have a seven times greater (repeat; 7 times greater) chance of developing Gout than those who drank no sweetened beverages (yes; I do realize that this was a one sentence paragraph).

I personally know an individual who was put on Allopurinol to control severe recurrent Gout.  After being left on the drug for the better part of a decade, he came down with partial kidney failure directly tied to the drug.  Interestingly enough, this person was at one time, drinking 6-12 sodas a day —- something that more of you than would care to admit, are likewise doing.  If you are struggling with Gout, you’ll definitely need to FIX YOUR DIET.  But in the mean time, there are several studies that indicate COLD LASER THERAPY can be of help.