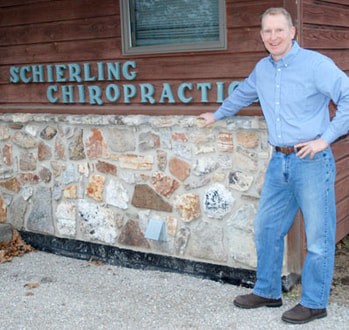 Schierling Chiropractic, LLC is the Mtn. View Chamber of Commerce Business of the Month. It is a full-service chiropractic clinic, the practice of Russell Schierling, D.C., who focuses on helping with chronic conditions. He does spinal decompression therapy and “everything related to regular chiropractic. I also do a lot of nutritional consulting. I like to help educate people how a few changes can make a huge difference in how you feel,” said Schierling. Scar tissue remodeling treatment is an area of specialty for him.

His approach to treating chronic pain is the result of his own experience. He said he developed severe elbow tendinosis in early 1996.   It progressively worsened over the next several years until a colleague introduced him to a new form of scar tissue remodeling therapy. Schierling said, “I had been through lots of massage therapy, the only thing that helped, it just didn’t last, and I tried all sorts of physical therapy modalities such as electrical stimulation and ultra-sound. Over the years I used acupuncture, various types of chiropractic adjustments, numerous nutritional supplements, and about anything else that did not involve drugs or surgery. All this time the pain was progressing, and the dysfunction increasing. It finally got to where it hurt all night. Although it did not really affect my ability to adjust patients, I couldn’t lift weights anymore or do anything else that required using grip strength like using a screwdriver or even picking up a jug of milk.”

Schierling said he didn’t have any faith that the suggested treatment would help him. “I was skeptical. In the field of natural healing, there is always a ‘new’ thing, and most of them are here-today-gone-tomorrow, never quite living up to their hype. However, after receiving just one treatment I was amazed at the results. I knew within two days that something was dramatically different. Within one week, I was lifting weights again for the first time in three years. It seemed like it was nothing short of a miracle.”

He was convinced of its effectiveness and adopted the methods in his own practice. “We’ve been off and running ever since. In adjunct to that we do things like cold laser therapy and all kinds of neat stuff. What I really enjoy are testimonials from people who have suffered for many years, sometimes decades, and their lives are changed after treatment,” said Schierling. Multiple video testimonials and a host of other information is available on his website doctorschierling.com.  Additional information about the practice can be found on the “Schierling Chiropractic, LLC” Facebook page.

For those who are experiencing chronic pain, Schierling encourages them to contact his office for an appointment. “If I think I can help you, I will do everything in my power to do it. If I think your problem may require a different approach and would be better served by someone else, I will also tell you that. The bottom line is it’s all about you getting rid of your chronic pain and regaining your health. One of the things I do is look at every patient and treat them like I would my child or sibling, treat them like my own family,” he said.

BACKGROUND
Schierling attended Kansas State University in the mid 80s, studying in the dual-degree Corporate Fitness Program (Nutrition and Exercise Physiology). He said he didn’t know anything about the chiropractic profession, but a severe powerlifting injury led him to seek chiropractic care after standard forms of medical treatment had failed. The treatment was a success. “And it wasn’t just the fact it helped me get out of pain, but I had allergies to all kinds of things for years and nothing had helped them. After a few adjustments my allergies went away,” he said.

After deciding on a career in chiropractic, Schierling chose Logan College of Chiropractic in St. Louis, graduating in 1991. He said he fell in love with the Current River and the Ozark Mountains of rural southern Missouri and northern Arkansas. He moved to Mountain View and began his practice in early 1992. Schierling started out at in the old Liberty Bell apartment building across from Gas Plus in Mtn. View. He built his current clinic in 1996.  He and his wife, Amy, have four children.

Schierling Chiropractic is located at 1219 S. State Rt. 17, Mtn. View, about a mile south of the airport, between the Kingdom Hall and Christian Church, across the street from A-1 Storage. Call 417-934-6337 for more information or to make an appointment. Regular office hours are 8:30 a.m. to 5:30 p.m. Mondays, Wednesdays and Fridays, closed for lunch from noon to 1:00 p.m.

After 22 years Schierling says he is as passionate about healing as ever. “We have a lot of fun here,” said Schierling. “Some people get up every day and don’t look forward to going to work. I get up in the morning and say, ‘I get to see patients today!‘”