why everyone should know who dr. otto warburg was

NOBEL PRIZE WINNER DR. OTTO WARBURG
IGNORE HIS FINDINGS ON CANCER AT YOUR OWN PERIL 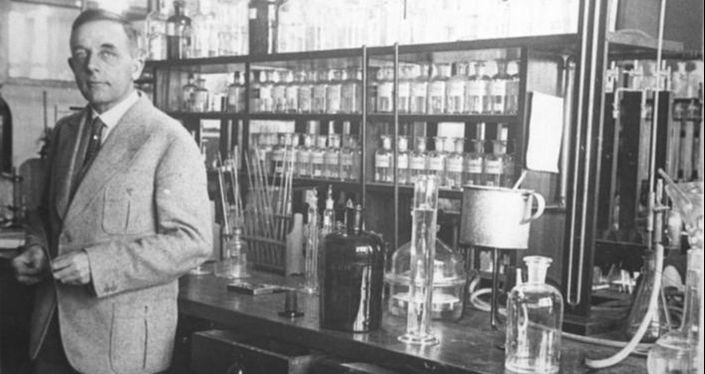 Bundesarchiv, Bild 102-12525 / Georg Pahl / CC-BY-SA 3.0
“Cancer is a complex disease and occurs when cells in the body begin to grow chaotically.  The mass of extra cells forms a growth or tumor. Cells in malignant tumors are abnormal and divide without control or order. These cancer cells can invade and destroy the tissue around them. In a process called metastasis, cancerous cells break away from the organs on which they are growing and travel to other parts of the body, where they continue to grow. Cells from cancerous ovaries, for example, commonly spread to the abdomen and nearby internal organs. Eventually, they travel throughout the body by invading the two systems of vessels that bathe and feed all of the body’s organs; the bloodstream and lymph system.  Before a PET/CT scan, the patient receives an intravenous injection of radioactive glucose. Many cancer cells are highly metabolic and rapidly synthesize the radioactive glucose. Information regarding the location of abnormal levels of radioactive glucose obtained from the whole-body PET/CT scan helps physicians effectively pinpoint the source of cancer and detect whether cancer is isolated to one specific area or has spread to other organs.”  Cherry-picked from PetScanInfo.com (What is Cancer?).  Also realize that CT &  PET SCANS are huge causes of cancer in and of themselves.
Alfred Nobel grew up in a family of scientists and inventors in Sweden (his father invented plywood in the late 1830’s), becoming a scientist and scholar himself.  Known mostly for taking extremely unstable nitroglycerin, and turning it into stable dynamite (yes, Nobel invented dynamite), he actually held over 350 patents, amassing a massive fortune along the way.  Never having married; when he died in 1896, his fortune — estimated to be in the hundreds of millions of dollars — was put into a trust created for a very specific purpose.  A group was formed to control these funds, doling out significant amounts of money to the winners nominated by those believing them to be at the top of their field in chemistry, physics, literature, medicine and, and of course peace.  The first prizes were awarded in 1901.

Otto Warburg was born in Germany in 1883.  He rapidly showed his mettle in academics, working in the fields of chemistry, cell biology, biochemistry, and physiology, earning his MD degree in 1911.  He moved rapidly up the ladder of academia, and by 1918 (the end of WWI) had been appointed a professor at Kaiser Wilhelm Institute for Biology, where his chief work was on tumor metabolism and respiration (he would have achieved this sooner had he not served in Germany’s most elite cavalry unit during ‘The Great War’).  Although it is said that he would have earned a second Nobel Prize if he had not been part of Hitler’s Germany (he was actually part Jewish), he won the prize in 1931 (he was nominated 46 times in his career).  What did Dr. Warburg discover that was so incredible — worthy of a Nobel Prize?  He figured out that blood sugar (glucose) is Cancer’s meal-of-choice.

According to an article in the November, 2010 issue of Clinical Orthopedics and Related Research (Biographical Sketch: Otto Heinrich Warburg, PhD, MD), Warburg was speaking to a group of other Nobel Laureates when he said…..

“Cancer, above all other diseases, has countless secondary causes. But, even for cancer, there is only one prime cause. Summarized in a few words, the prime cause of cancer is the replacement of the respiration of oxygen in normal body cells by a fermentation of sugar. All normal body cells meet their energy needs by respiration of oxygen, whereas cancer cells meet their energy needs in great part by fermentation. All normal body cells are thus obligate aerobes, whereas all cancer cells are partial anaerobes. From the standpoint of the physics and chemistry of life this difference between normal and cancer cells is so great that one can scarcely picture a greater difference. Oxygen gas, the donor of energy in plants and animals is dethroned in the cancer cells and replaced by an energy yielding reaction of the lowest living forms, namely, a fermentation of glucose.”

Basically, Warburg realized that cancer cells shared a universal characteristic — they were hypoxic (low levels of O2), requiring them to find another source of fuel.  Instead of cancer cells going through normal cell respiration using oxygen, they respired anerobically by fermenting glucose and destroying MITOCHONDRIAL ACTIVITY.  By the end of his life he believed and taught that this was the result of exposure to toxicity —- POLLUTION, CHEMICAL TOXICITY, RADIATION, INFLAMMATORY METABOLITES, microbes run amok (we would today call these OCCULT INFECTIONS or “DYSBIOSIS“), as well as ACIDITY.

Although the body will do everything in it’s power to maintain HOMEOSTASIS as far as pH is concerned, hyper-acidity tends to lead to cancer, while cancer leads to a state of hyper-acidity (see the final link in the previous paragraph).  It is my belief that the primary area of manifestation is not necessarily the blood, as the body will not let the blood move out of an extremely narrow range of pH without dire consequences (death).  This acidity is undoubtedly, however, affecting our GUT HEALTH and MICROBIOMES.  Tomorrow (or whenever I get it done), I’ll show you how MEDICATIONS are one of the chief ways we are toxifying our bodies.  The resultant toxicity is related almost every health issue you can name, including CANCER (HERE’S ONE OF THE MORE COMMON ONES).

As Warburg got older (he lived to the ripe old age of 86, working the entire time — not unlike DR. SEYFRIED), the journal mentioned earlier revealed that he took his message of toxicity, and pH control to heart.  “In his later life, he apparently became somewhat eccentric regarding his eating habits, insisting on organic foods long before the current trend, even taking his own produce to restaurants.”  What should this tell you?  It is imperative that even though neither your doctors nor most of the medical research community give a flip about Otto Warburg’s discoveries the better part of a century ago, you had better grasp their implications if you care about your health and the health of your family.  It’s why even though Mayo and MD Anderson have publicly denounced the “Sugar / Cancer” connection (HERE), you would do well not to make the same mistake.

It’s also why according to peer-review, one of the hottest ways of eating as far as cancer is concerned is the KETOGENIC DIET.   Never forget that sugar not only feeds cancer (HERE), it feeds infection as well (HERE).  And if you’ll click the KD link two lines above, you’ll see that it’s also being used to treat a vast array of other diseases associated with mitochondrial dysfunction (MS, Type II Diabetes, ALS, Alzheimer’s, Parkinson’s, etc).

Dr. Schierling is licensed chiropractor and world-renowned for intervention with persistent chronic pain. Dr. Schierling focuses on a holistic approach to helping end his patients’ chronic pain that includes Scar Tissue Remodeling Therapy.
All Posts »
PrevPreviousacidity -vs- alkalinity: the inverse relationship between stomach acid and your body’s level of acidity as related to ppi’s
Nextplacating those wacky conspiracy-minded antivaxxersNext