why staying away from soybean oil is critical for your health

SOYBEAN OIL
BAD NEWS FOR BOTH YOUR HEALTH AND YOUR WAISTLINE 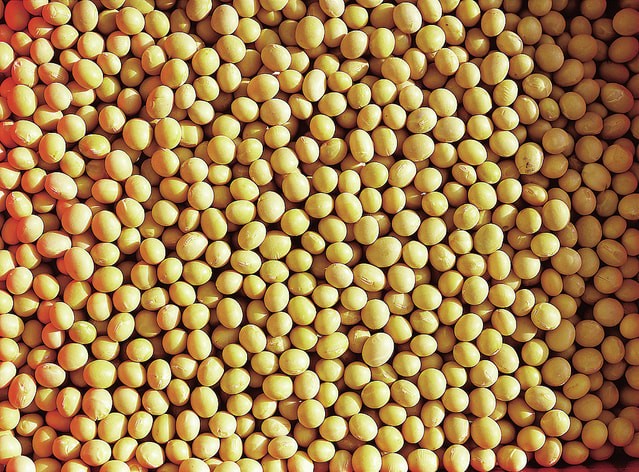 “Almost all margarine and shortenings contain soybean oil. It is also frequently used in mayonnaise, salad dressings, frozen foods, imitation dairy and meat products and commercially baked goods. Most oils sold as ‘vegetable oil’ are soybean oil.  Soybean oil is the most widely used edible oil in the United States.”   From Soybean Oil, Uses, and Overview, on the website of the United Soybean Board (Soy Connection dot com)
Although soy protein in its various forms was MYTHICALLY TOUTED by the health food industry for decades as the king of the ‘super-foods’, we now know better.   What we never hear much about however, is Soybean Oil.   Spectrum Commodities says that, “Soybean oil is the most widely used cooking oil in the U.S. It accounts for more than 75% of total U.S. consumer vegetable fat and oil consumption.”  The next sentence reveals that this oil is not only used in food, but also in manufacturing certain, “inedible products such as paints, varnish, resins, and plastics.”  An article from earlier this year (March 5) on the Medical Xpress website (How Healthy is Genetically Modified Soybean Oil?) went even further by saying that, “Soybean oil accounts for more than 90 percent of all the seed oil production in the United States.”  Needless to say, as a nation, we both produce and consume a bunch of the stuff.

The same article went on to talk about the “health” differences between regular Soybean Oil and Genetically Modified Soybean Oil.  “GM soybean oil is just as unhealthy as regular soybean oil in that it also induces obesity, diabetes and fatty liver. GM soybean oil does, however, have one advantage: it does not cause insulin resistance – the inability to efficiently use the hormone insulin.”  Not only is this last sentence not true (the most recent research says that Soybean Oil does cause INSULIN RESISTANCE) but that the debate over regular or GM is moot to begin with.

According to a two year old article by Veronique DuPont for the website Phys (GMO Corn, Soybeans Dominate US Market), “By 2012, 88 percent of corn and 94 percent of soy grown in the United States were genetically modified, according to the US Department of Agriculture. And with the US market now well saturated, seed firms are eying China and South America to spur growth and profits.”  For all intents and purposes, there is no longer such a thing as non-GMO soy.  And as for the statement that Soybean Oil doesn’t cause Insulin Resistance — aka Pre-Diabetes; let’s take a look.

When we think about the food product that causes the most DIABETES, we generally think of corn in the form of HIGH FRUCTOSE CORN SYRUP.  As crazy as it might sound, soy appears that it could be worse.  In the press release for a brand new study published in PLoS One (Soybean Oil Is More Obesogenic and Diabetogenic than Coconut Oil and Fructose…..), lead researcher Dr. Poonamjot Deol stated that, “this was a major surprise for us, that soybean oil is causing more obesity and diabetes than fructose, especially when you see headlines everyday about the potential role of sugar consumption in the current obesity epidemic.“

One of the most interesting aspects of this study has to do with the authors sharing the history of how we got here from there.  In other words, how did we go from being a nation that didn’t think twice about consuming SATURATED (ANIMAL) FAT to a nation whose government was telling its citizens to avoid foods like RED MEAT, eggs, and butter?  Pay close attention and see why you simply cannot trust your government to give you good information when it comes to diet.  Also notice that even though they talk about the benefits of saturated fats, they can’t quite find it within themselves to mention saturated animal fats.

“Saturated fatty acids were deemed unhealthy due to studies in the 1950s and 1960s that showed a positive correlation for cardiovascular disease. As a result, nutritional guidelines were developed that encouraged people to reduce their intake of saturated fat, typically found in meat and dairy products, and increase their intake of polyunsaturated fatty acids found in plant oils. These guidelines are still in effect today. In recent years, however, there has been a shift in the dialogue surrounding which dietary fats are the most harmful, with some studies suggesting a reconsideration of nutritional guidelines. In particular, there is a growing body of evidence that suggests that saturated fat from sources such as coconut and palm oil, which are rich in medium chain triglycerides (MCTs), may actually be beneficial for the prevention and treatment of the Metabolic Syndrome.  The recommendation for decreased saturated fat consumption, as well as other factors, led to a dramatic, greater than 1000% increase in the consumption of soybean oil in the U.S. between 1909–1999.

The increase in obesity in the U.S. over the last half-century coincides with a shift in the dietary preference away from saturated fats from animal products and toward plant-based unsaturated fats. That shift was due in large part to the results of the Seven Countries Study [HERE], which was published in 1970 and implicated saturated fats as the causal factor for cardiovascular disease. At the same time, soybeans were being promoted for cultivation and started to receive considerable federal subsidies. As a consequence, soybean oil soon became the oil of choice for domestic as well as commercial cooking purposes in the U.S.”

For this study, the authors looked at side-by-side comparisons of diets that were high in Coconut Oil, diets that were high in Soybean Oil, as well as a high-Fructose diet.  They also had groups from both the Coconut Oil group and the Soybean Oil group that they supplemented with High Fructose Corn Syrup.  FYI, the High Soybean Oil / High Fructose group would be the group that would most closely mimic the SAD (Standard American Diet).  Here are some of the findings.

If you are interested in getting healthy, LOOSING WEIGHT, and effectively dealing with your CHRONIC PAIN, you have a much better chance if you successfully deal with INFLAMMATION.  To see how best to accomplish this without drugs, take a look at THIS POST.