as your gut goes, so goes your health 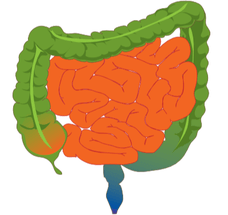 Since the days of Bayliss and Starling’s groundbreaking experiments over a century ago, science has understood that there is a relationship between gut health and overall health.  It began with Starling’s discovery that food in the intestine triggers nerve signals which cause some intestinal muscles to contract while others relax.  The action produces the wave-like pattern of contraction and relaxation called “peristalsis” that moves food through our intestines. These brilliant doctors / scientists / brothers in law, created an experiment where they cut the neurological link between a dog’s gut and Central Nervous System (brain & spinal cord).

Amazingly enough, Bayliss and Starling were then able to stimulate peristalsis without any messages from the dog’s Central Nerve System.   Although people have always known that the gut was related to thoughts and emotions (they just had that “Gut Feeling” about it), the work of these two scientists gave us the first hard evidence that the gut could act as its own brain.  This other nervous system is called the Enteric Nervous System, and is often times referred to as “The Second Brain”.

How does this mostly forgotten / ignored information affect you and your family?  Gut Dysfunctions are literally exploding across the culture.  Some of these are the obvious.  Things like IRRITABLE BOWEL SYNDROME, Crohn’s Disease, full-blown CELIAC DISEASE or equally debilitating but mostly ignored, GLUTEN SENSITIVITIES — all things that are easy to grasp as far as their relationship to gut function is concerned.

However, there are an array of more complex health problems related to GUT HEALTH.  I have written about most of these quite extensively.  They include a vast healthcare wasteland of AUTOIMMUNE DISEASES.  But the nightmare does not stop there.   FIBROMYALGIA / CHRONIC FATIGUE, all sorts of Neurological Conditions, and even behavioral issues such as ADD / ADHD, and AUTISM (for fun, Google “Autism Gluten” and see what you get) are being linked to poor gut function in today’s scientific medical literature.

Is your doctor talking to you about this cutting edge research, and the fact that there is a strong relationship between gut health and overall health?  Are you joking me?  Your doctor is going to prescribe you or your child yet another round of ANTIBIOTICS, while ignoring the fact that these and other drugs are destroying your Immune System, your ability to make neurotransmitters, your ability to fight off DYSBIOSIS, as well as your ability to digest / absorb / and utilize the nutrition found in the food you eat.  In fact, the gut should be the center of healthcare — all healthcare.  The medical community used to understand this.  Go back 40 or 50 years, and everyone who was admitted to the hospital for any reason got an enema.  Why?  The medical community still realized that if the bowel was clean, a person had a better chance of healing — no matter what their problem was.

So, why do doctors continue down this same old path of ignoring the gut, even though all of the research pointing to the relationship between gut health and overall health is coming from their own medical institutions, universities, and scientific journals?  Can anyone say M-O-N-E-Y?  Don’t ever kid yourself — there is big money in drugs —- especially lifetime-drugs.  Or drugs that wreck your health, leading to yet more doctor visits and more drugs.   This is why Big Pharma, who ultimately controls the practice of medicine, will fight tooth and nail to keep this information out of the hands of the average work-a-day physician!  What information are they suppressing from you the patient.  For one, they are not telling you that antibiotics are one of the single most destructive drugs that you can possibly ever put in your body because they SUPPRESS THE IMMUNE SYSTEM.   But there are others — many others.  Just another one of the beauties of EVIDENCE-BASED MEDICINE.