CHIROPRACTIC AND FLU PREVENTION / FLU TREATMENT
IS THERE A LINK? 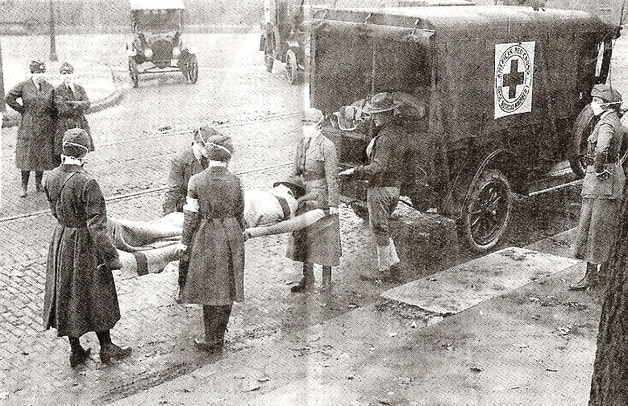 Photograph from a 1918 edition of the St. Louis Post Dispatch

Despite that fact that history always repeats itself, we in America tend to have short memories.  It was just over a century ago (1918) that a modern day “Black Death“, thought today to be a combination of H1N1 flu and swine flu, swept across the planet killing approximately 5% of the world’s population (100 million people) —- more people than died when 1/3 of Europe’s population was wiped out by 100 years of Bubonic Plague.  In the US, between one in four and one in three came down with the flu, and just under 700,000 died — a number greatly magnified by the fact that during 1918, American involvement in WWI was at its zenith.   Many then thought that it was the end of the world, and most people today seem to think that because of the miracle of modern medicine, this kind of disease-induced carnage could never happen again.  They’re wrong.

Every year we are told to get the Flu Vaccine because THIS IS SHAPING UP TO BE THE WORST FLU SEASON EVER!  As for me and my family, we’ll take our chances.  Am I crazy?  Many would say so.  But hey; I’m used to it —- I’m a chiropractor.  For many reasons, I am not an advocate of FLU SHOTS.  In fact, once you understand exactly HOW THE FLU VACCINE IS MANUFACTURED, you start to realize that it would never stop a flu pandemic anyway.  Besides, I’m not a big fan of drug-induced ALZHEIMER’S DISEASE.    This paragraph is begging the question of just what we would do in the event of a flu pandemic?

Among other things such as a diet and supplements based on WHOLE FOODS and regular exercise, I also would make absolutely sure that we were all getting regular Chiropractic Adjustments.  Huh?  Chiropractic Adjustments for the flu?  Sure!  Once you understand a little bit of physiology, this makes a lot of sense.  Because CHIROPRACTIC ADJUSTMENTS have significant effects on the Nerve System, and because the Nerve System heavily modulates the Immune System (this is the exciting new field of “Psycho-neuro-immunology”), there is a large and rapidly growing body of evidence showing how Chiropractic Adjustments can positively and significantly up-regulate the Immune System.  The cool thing is that there is a lot of evidence to back this statement.

Although many people decry anecdotal evidence in favor of double-blind placebo-controlled experiments, I would argue that in certain cases (the practice of Chiropractic for instance), the later can be difficult to the point of being impossible to perform.  For example, how would a researcher give someone a “sham” adjustment and make their subject think they were on the receiving end of something therapeutic?  Just another example of why I have said for a long time that EVIDENCE-BASED MEDICINE is one of the biggest hoaxes currently being perpetrated on the American people.  This is why I love our ﻿VIDEO TESTIMONIALS﻿ so much.  The proof is in the pudding.  But back to chiropractic and the flu.

I have known for a long time ago about the fact that chiropractic care had a better track record than medical care as far as helping sick patients survive the 1918 flu pandemic.  In fact, I have actually met and personally spoken with chiros whose fathers and / or mothers (chiros themselves) cared for thousands of very sick patients during that scary period of our history.  If we understand the way that Chiropractic Adjustments modulate the Immune System, we should not be surprised.  Without going into lots of statistical details (this info can be found all over the internet on this very topic), suffice it to say that during the period from 1918-1920, people with the flu who were under chiropractic care died at lower rates than people treated by the medical profession — much lower rates.  To begin to understand why, I would urge you to take a look at a short article on a study from the early 1920’s known today as, “THE WINSOR AUTOPSIES“.

Oh; for those who will doubt what I am telling them is true, HERE are several Video Testimonials with similar examples of this phenomenon —- from my clinic.