colonic irrigation as it relates to gut health

ENEMAS AND COLONICS
AN ANCIENT REMEDY FOR MODERN TIMES 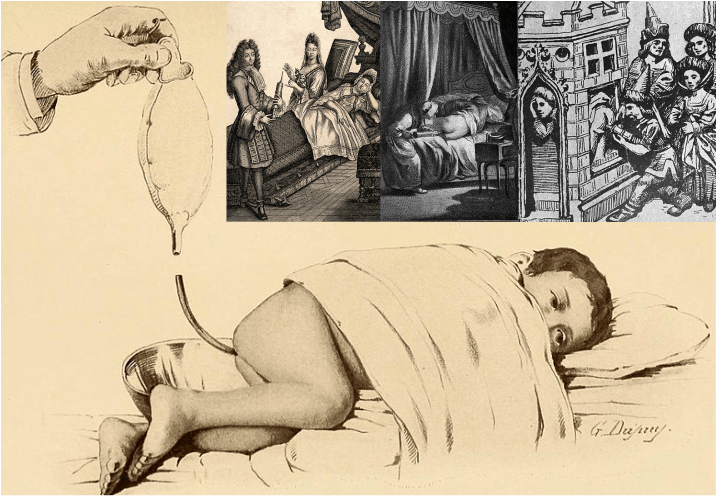 Boy From 1910’s Diseases of Infancy & Childhood. Others from Wellcome Images M0011185, L0006474, and V0011657
Huge themes in the Bible are forgetfulness and remembrance (i.e. forgetting or remembering what God has done for you). Isn’t it interesting how as a society we tend to forget?  One of the many forgotten aspects of health — although it’s been making a comeback as of late — pertains to GUT HEALTH.   Never forget that the health of your digestive tract, will, to a large degree, determine your overall health.  We shouldn’t be surprised considering that the Gut is where a whopping 80% of your body’s Immune System resides (HERE), largely being made up of bacteria.

The people of bygone eras understood this quite well.  Not only was an enema one of the first forms of treatment against a wide array of health issues, but until about 50 or 60 years ago, it was that way in our hospitals as well.  Talk to some old-timers.  They’ll tell you that virtually no matter why you were admitted to the hospital, the first thing you got was an enema. Why?  Doctors had not yet forgotten that the body’s ability to heal is directly proportionate to what what’s going on in the Gut.  My how things have changed.

Because we live in a society that has been brainwashed to believe that the practice of medicine must always be high-tech and involve lots of DRUGS AND DIAGNOSTIC TESTS, not only are enemas not done in the average hospital setting today, they are looked upon with eye-rolls by the average practitioner.  When might an enema or colonic be a good idea for those not so inclined to follow a “medicine-first” approach?  Follow along as I walk you through a primer on Gut Health.

Both ANTIBIOTICS and NUMEROUS OTHER DRUGS destroy the good bacteria that make up what’s commonly referred to as your “MICROBIOME“.  When you have an abnormal ratio of ‘good’ bacteria to ‘bad’ bacteria (or other organisms such as YEAST, MOLD, PARASITES, etc, etc), the end result is something called “DYSBIOSIS“.  Although doctors certainly check for acute infections such as C. DIFF, they do not care much about Dysbiosis (which are technically chronic infections), nor do they test for it even though there are some great tests out there (the link on parasites tells you how said testing is done).  Why not?  Because, as I just showed you, most Dysbiosis begins with a medical intervention — usually in the form of drugs.  Once you understand what dysbiotic infections eat, you can start thinking about defeating them.

If you want to dry Dysbiosis up at it’s source, you’ll have to quit feeding it.  Unfortunately, if you are a dysbiotic bacteria living in the average American Gut, every day is Thanksgiving and Christmas combined.  Allow me to explain.  In 1900, the average American consumed less than five pounds of sugar per year, and almost zero processed carbohydrates.  Today  people are eating about 160 pounds of sugar per annum.  This constitutes a 3,200% increase in annual sugar consumption in the past 120 years.  This doesn’t even begin to touch on the mass quantities of processed carbs and white flour we are collectively consuming.  Why is it such a big deal?  Because the food-of-choice for the nasties mentioned in the paragraph above is — you guessed it — sugar and highly processed carbs (carbs that rapidly convert to sugar in your body.  In other words, sugar feeds infection (HERE).

Beyond the obvious Gut-related problems with your Immune System and DIGESTION, Dysbiosis is going to lead to any number of equally as serious, but less well-known problems.  For instance, were you aware that 90% of your body’s neurotransmitter Serotonin is made in the Gut (HERE)?  Or what about the fact that the vast majority of T4 (the inactive form of thyroid hormone) is converted to T3 (the active form) in the Gut (HERE)?  There are any number of others (HERE).  Conclusions are not difficult to draw.  If you have problems in your Gut, it’s going to affect your health in one fashion or another — always adversely.

The obvious solution to this problem is to feed your Microbiome what it needs.   For most of you — particularly those of you who are struggling with CHRONIC INFLAMMATORY DEGENERATIVE DISEASES, AUTOIMMUNITY, or CHRONIC PAIN —- this is going to require a LOW CARB approach of some sort (for numerous reasons I am a huge fan of the PALEO DIET or the many similar), with plenty of the right kind of fiber (HERE).  You also might, depending on the severity of your problem, need to be looking into the new frontier in healthcare — FMT.  However, you might also benefit from enemas or colonic irrigation.

THE DIFFERENCE BETWEEN ENEMAS & COLONICS

Immediately upon graduating from Logan Chiropractic College, I went to Nebraska to work with Dr. James Teachworth for a couple of months prior to settling in beautiful MOUNTAIN VIEW, MISSOURI.  Dr. Teachworth had a library in his house that was nothing short of amazing; probably containing thousands of volumes.  One of those books was from the 1930’s, and pertained to the practice of colonic irrigation (otherwise known as “Colonics”) — something that used to be done by a fair number of Chiropractors.  The thing I remember most about the book was the pictures.

There were dozens of “before” and “after” pictures — the “before” images being of people with wide assortments of SKIN CONDITIONS — some of them incredibly nasty.  The “after” picture would show the ‘stuff’ that came out of the colon as well as the change in the person’s skin — usually dramatic and usually within a matter of weeks.  The material that came out of the bowel might remind you of a shed snake skin, only, as you might imagine, far thicker and usually quite disgusting (these are the ‘mucoid plaques’ that attach themselves to the wall of your colon).

True Story: A person I know quite well suffered from MIGRAINE HEADACHES from the time she was in grade school until about 10 or 12 years ago (three decades).  A series of Colonics solved her problem.  The material that was washed from her bowel was, in her words, “orange and fuzzy” — obvious characteristics of a CANDIDA OVERGROWTH.   All of this raises a simple question — what is the difference between an enema and Colonic Irrigation?

An enema typically works via gravity feed (DIY bags or kits range from $10.00 to $70.00 and are available online or at your local drugstore) or by using a special syringe or bulb to insert / ‘inject’ water into the bottom part of the bowel.  The bulbs are more commonly used with infants or younger children (plenty of info on YouTube).  The thing is, a colon is five feet long.  Thus, with the ‘Colonic’, various means are used so that the entire length of the colon can be reached / cleaned with water, not just the lowest portion.  There are numerous approaches to health and wellness, as well as solving chronic health issues.  No matter which approach(s) you take to dealing with LEAKY GUT SYNDROME, IBS, Dysbiosis, or others, Colonic Irrigation is a therapy that can easily be integrated into THIS or other protocols.