creating your own exit strategy for chronic pain or chronic illness

HELPING YOU FIND AN EXIT STRATEGY 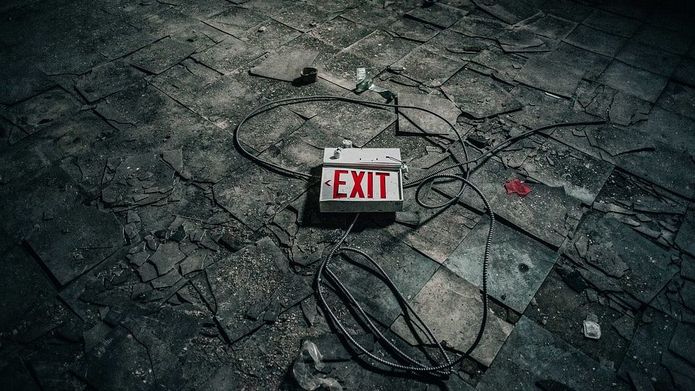 “An exit strategy is a means of leaving one’s current situation, either after a predetermined objective has been achieved, or as a strategy to mitigate failure. An organization or individual without an exit strategy may be in a quagmire. At worst, an exit strategy will save face; at best, an exit strategy will peg a withdrawal to the achievement of an objective worth more than the cost of continued involvement.”   The definition of the term “Exit Strategy” from a popular online encyclopedia
Because of (or maybe in spite of) our technological advances, modern medicine has proved itself the dream scenario for BIG PHARMA and our healthcare system, which it LARGELY CONTROLS.  When it comes to DIABETES, HEART DISEASE, CHOLESTEROL ISSUES, ARTHRITIS, CHRONIC INFLAMMATORY DISEASES, INCREASED INTESTINAL PERMEABILITY, AUTOIMMUNITY, as well as a myriad of others, our medical community will tell you that there’s no cure.  Instead, there’s only a lifetime of tests, DRUGS, procedures, EXAMINATIONS, DOCTOR VISITS, MISERY and BRAIN-WASHING.  In the words of those two CUT OUT GUYS from the old Guinness beer commercials, “brilliant“.  What more could the people making billions of dollars off this system ask for than for the American people to live longer than ever, while being sicker than ever as well (HERE)?  That’s why I created my site.

My goal is to weed through the available peer-review and provide you with a synopsis — the pertinent information that you and your family should be aware of if you value your health / their health (HERE, HERE, HERE, HERE, and HERE are a few examples of hundreds).  And because the starting point for solving chronic health issues, getting out of pain, and getting your life back is essentially the same (only because the causes of most ARE THE SAME AS WELL, I have also provided you with A GENERIC BLUEPRINT for getting there — an “exit strategy” if you will.

Why is having an exit strategy so important when it comes to your healthcare?  As the old cliche says, a failure to plan is planning to fail.  If you follow the pack (i.e. do exactly what your doctor tells you to do), you’ll never be anything more than what Corporate America (the Pharmaceutical Industry included) sees you as —- a commodity —- a dollar sign —- a gold mine.  To them, a chronically sick public is the goose that’s perpetually laying golden eggs.

Think about the importance of exit strategies in terms of our national involvement in the wars we’ve fought since the SECOND WORLD WAR.  With today’s technology, it’s downright easy to go into a country, blow things up, kill people, and generally be destructive on every level.  But having a valid / effective exit strategy — that’s much more difficult.  It’s likewise true in the medical field.  It’s easy to run lots of tests and chase symptoms by by prescribing drugs or performing unnecessary surgeries (HERE).  But getting off the MEDICAL-MERRY-GO-ROUND; that’s the real challenge.  And unfortunately, it’s not something your doctor can do for you.  In fact, don’t be surprised if your doctor and your family / closest friends are against you even trying (HERE).   The truth is, if you want to enjoy life as you get older (or for that matter, now), you’ll have to knuckle down and do it yourself.

Is it hard?  For awhile it may be the hardest thing you’ve ever done in your life.  But believe me when I tell you it gets easier.  the following is an interview / testimonial from Carol.  Carol saw her health and quality of life slipping away as she was diagnosed with SEVERAL AUTOIMMUNE DISEASES, including RHEUMATOID ARTHRITIS, SCLERODERMA (an autoimmune disease that essentially causes your entire body, organs included, to turn to fibrosis / scar tissue) as well as am unnamed lupus-like disease.   I have a vested interest in this case because Carol is my youngest sister.   Pay close attention, because her story — at least the first part of it — is not unique. There are many of you out there who will read this and see yourself in her.  I have added my links into her letter, which were her emailed answers to “interview” questions.

Look folks; there’s nothing up my sleeves and I’m not trying to sell you anything.  My goal here is to show you that you can knock it out of the park in the same way that Carol is.   If you are one of the 90% of Americans who are OVERWEIGHT, seeing a chiro for ENDLESSLY REPEATED ADJUSTMENTS, struggling with CHRONIC PAIN (including FASCIAL ADHESIONS), or dealing with some sort of CHRONIC ILLNESS, you’ve got nothing to lose.  Don’t be a lemming, and for Pete’s sake; don’t take what your doctor says LYING DOWN.  Create a written plan of action (HERE is a generic template), find an ACCOUNTABILITY PARTNER, and get started —- today.

AN UPDATE:
Just to let you know, our original conversation was in May of 2015. I saw her on Jan 1 of 2016 for my PARENTS 50TH.  Eight months after starting this program, Carol had lost almost 100 lbs and got off most of her meds — she looked and felt great!  Her husband, who followed the same program, lost maybe as much weight, and started riding his bike to work in a town that is 11 miles away.  Within a year and a half he has become a serious competitive long-distance bike racer (he just won a big race down in Austin), who is good enough he’s been sponsored by a riding team from Kansas City.  Way to go guys!