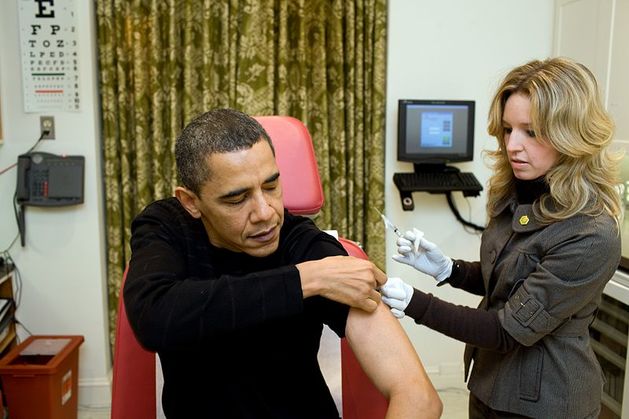 Although you probably are not aware of it, there is an important nation-wide vaccination battle shaping up at this very moment.  My best friend RICK and his wife KATE, recently discussed some of the particulars with me when they stopped by to spend a little time with our family on their way back to Kansas for Christmas.

I learned that Rick’s niece, Dreonna “Burris” Breton, was recently fired from her position as an RN with Horizon Healthcare Services in Susquehanna Valley, Pennsylvania.  Although Dreonna was quite young when I left CHASE COUNTY, I remember her from being at Toby and Kim’s house on a couple occasions.  I also believe my dad would have been her grade school principal.  But back the the question at hand; why did Dreonna lose her job?  What was her ‘crime’?

Dreonna lost her job simply because she chose not to have a Flu Shot.  I can’t exactly blame her; especially when she had such good reason for refusing.   She’s pregnant.  As far as I am concerned, this fact alone should be more than enough reason to legally / ethically enable a woman to refuse having toxic elements (MERCURY and ALUMINUM are two of many) injected into their body.  Unfortunately, freedom to chose is no longer an option when it comes to vaccinations for healthcare workers.  Mark my words, it’s just the beginning.  As everyone reading this post is soon going to find out, when it comes to American healthcare, the Bob Dylan effect is underway.   The times they are a changing.  And from all indications, they are not changing for the better.

Understand that no matter your political persuasion; because of our nation’s increasingly nationalized medical policies, the day is rapidly approaching when just like Dreonna, you are going to find yourself unable to make healthcare decisions.  Important decisions will be made for you by an entity that thinks it knows more about taking care of your family than you do —- Big Government.  Think I’m exaggerating?

Dreonna’s particular case pertains to healthcare workers.  For those who do not know, people working in the healthcare field are now required to get certain VACCINATIONS — including the FLU SHOT.   In order to insure obedience, adherence to these policies is now being tied to federal monies.  In other words, if a medical facility does not have 100% employee vaccination rates, the government will be withholding percentages of their state and federal subsidies (schools that are not already doing so, will soon be be on the same bandwagon).  Oh; I get it.   You think that you’ll be unaffected just because you aren’t a healthcare worker or don’t have children in school?  Don’t  hold your breath.

Because we have collectively voted for government-controlled healthcare, prepare to have your healthcare increasingly controlled by the government.  As time goes on, you will lose more and more freedoms pertaining to what healthcare you want or don’t want for yourself or your family.  What does this chipping away at your freedom boil down to?   What does practically everything boil down to in this country —- particularly when it comes to that happy threesome of Big Government, Big Pharma, and the Medical Industry?  You already know the answer to this.   Money!   Sorry folks.  No matter how hard you wish it were true, government-mandated ‘EVIDENCE-BASED MEDICINE’ is not going to solve our national health and OBESITY crisis.

Although many will adamantly disagree with her decision, Dreonna is intelligent and well-read on this issue.  After personally seeing the shocking numbers of kids neurologically, endocrinologically, and metabolically messed up by vaccines in my little practice in the RURAL OZARKS, I believe that she made the best choice she could have made for her unborn child.  After going through several recent miscarriages, Dreonna knew she did not want to do anything to hurt her chances of delivering a healthy, full-term baby.

Granted, there are numerous issues besides vaccinations that relate to INFERTILITY and the ability to carry a child to term, but let’s be honest with ourselves for a moment.  Women know to avoid all sorts of chemicals, drugs, and alcohol during pregnancy.  It only makes sense to bail on the mercury and aluminum as well.  And as for the chances of her patients contracting the Flu because she chose to forgo the shot; I would sincerely hope that you read THIS PIECE before passing judgment that Dreonna’s decision puts her patients in harms way.  HERE is a great piece I added after the fact on the issue of pregnancy and the flu.

Although I probably should have called Dreonna for a personal interview (occasionally I manage to beat the the big boys to A SCOOP on hot-button issues), it is likely that Fox, CNN, MSNBC, etc, will soon be carrying this story or stories just like it.  Rest assured that when they do, Dreonna (or whomever they chose to interview for their story) will be edited to look like a fool.  A lone wolf.  A trouble maker looking for some kind of big payday.  Even though you never asked for it Dreonna; you’re soon going to be famous.

The interesting thing about this whole situation from a patient’s perspective is that in similar fashion to INFLAMMATION, I am not sure that 1 in 1,000 people could tell you what the Flu really is.  Oh; don’t get me wrong — everyone certainly thinks they know what the Flu is.  But as far as really knowing?  Doubtful (HERE is what I am talking about).  Hang in there Dreonna — I know that there are lots of people praying for you.  I wish there were something more I could do for you right now (if there is, please let me know).