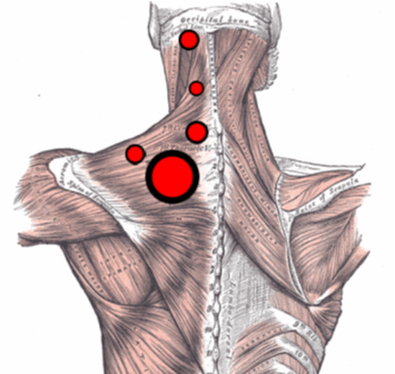 After suffering a POWERLIFTING INJURY when I was 19 years old and then trying to deal with it for several months, a life-changing experience with Chiropractic led me to become a Chiropractor.  Problem solved.  Eventually, the combination several basketball injuries and a congenital foot issue, caused horrendous foot pain for a decade, which circuitously led me to Shawn Eno of XTREME FOOTWERKS.  Again; problem solved.  After dealing with declining energy levels, weight gain, joint pain, and other symptoms, I started hanging out with a group of FUNCTIONAL NEUROLOGISTS and solved this by dealing with several problems, including an underlying GLUTEN SENSITIVITY.   I may have stumbled onto another solution; this one for a chronic problem I have had for the better part of a decade — Upper Trapezius Trigger Points, which are exceedingly common in the general population.

About eight years ago I was doing laps in our pool (butterfly stroke) trying to get a good stretch / workout on my chest.  I felt something “pop” (I am not even sure where), and almost immediately started dealing with TRIGGER POINTS in the upper trapezius; right side only.  While certainly not debilitating, there have been times when this problem has been worse than others.  Sometimes working out too intensely (or too heavy) can bring it on, or throwing too hard (or for too long a time).   Sometimes sitting for too long a time can fire it up as well.  THIS is what I personally use to deal with this problem, and have suggested to patients for a number of years.

Once my Trigger Point is fired up, it causes a spasm that hits me just behind the Mastoid Process (the big knob of bone behind the ear).  Not only does this prevent me from turning my head, but it can bring on a massive headache as well.  When I lie down, the problem goes away in a matter of minutes.

Despite lots of TISSUE REMODELING in the area, it never gave me long-term relief.  Enter Joe.  “Joe” came to see me recently with a long-standing case of an almost identical problem that was both preventing him from turning his head and was gripping him at the base of his skull, just behind the mastoid.  After working on his traps and neck for two visits and getting absolutely nowhere, I started thinking about the mechanism for my issue, and started working on the front part of his shoulder; not on the BICEPS TENDON itself, but in the general vicinity.

The difference was immediate and huge.  Not only did his CERVICAL RANGE OF MOTION return almost instantly, but the spot that was gripping him at the base of his skull totally calmed down.  Naturally, I went home and experimented on myself — with an almost identical result.  However, I have not done any Tissue Remodeling on myself.  If my Trapezius Muscle starts to trigger up, I just contact (squeeze / dig into) “the spot” — the identical area I used to treat Joe —- and the discomfort / tension / spasm / pain leaves instantaneously; and stays away for quite some time.  I will eventually do some remodeling on myself, but really want to figure out what is going on, and why it’s doing what it is doing.

Is the solution going to be long-lived?  Honestly, I do not know.  But over THANKSGIVING I am going to see my brother.  No one, and I do mean “no one” has worse Upper Trapezius Trigger Points than him.  If it helps him, as well as the several patients I plan on seeing with this problem in the next few weeks, I will put the word out.

What do I think is the mechanism behind this?  Firstly, one thing I am learning is that even though I know better, I have to stop thinking of musculoskeletal anatomy in terms of individual muscles, and start thinking about it in terms of groups of muscles, and their connector — THE FASCIA SYSTEM.  There is definitely something going on between the upper traps, and the area where the bicep (which shares an attachment point with pec minor), pec major, and deltoid all come together, as well as the SCM, and probably the Splenius Capitus (and we haven’t even touched on the Rhomboids, LEVATOR, or SCALENES yet).  And truthfully, who knows what other culprits I might be leaving out.

As always, no matter what sort of health-related problem you might be having, never neglect to deal with underlying INFLAMMATION.  HERE is a general template for accomplishing this.  I will try and post a follow up to this sometime before the first of the year.