finding the bullseye when dealing with fascial adhesions

FASCIAL REMODELING
GETTING ON TARGET BY FINDING THE BULLSEYE 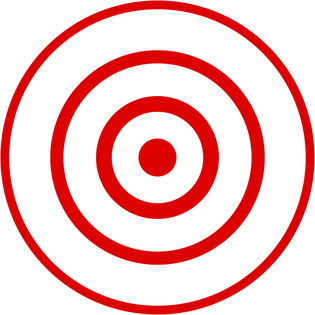 As I have told you many times before, FASCIAL ADHESIONS are different than normal tissue in any number of ways.  One of those is that it is significantly less elastic than normal tissue.  This is because after injury or severe overuse, the ordered nature of Fascia that gives it it’s elastic properties is altered.  Instead of looking like well-combed hair under a microscope, it looks more like a HAIR TANGLE.   HERE is a better explanation of this phenomenon.

I always tell people that they will know whether or not my approach to healing is going to help after one treatment.  Not that one treatment is going to necessarily solve your problem in its entirety, but there will be enough change that you will know whether or not we are on the right path (if it doesn’t help at all the first time, more of the same won’t help either).  Be aware however, that sometimes things can change after treatment (LIKE THIS).  Allow me to give you an example using a patient I treated a while back.

A young male (late 20’s and appearing to be in good physical condition) presented to my office with CHRONIC NECK PAIN, upper back pain, and pain in and all the way around his right SHOULDER.  He had played sports his whole life (he was a right handed quarterback and pitcher). Besides this, he had been through several motorcycle / four wheeler accidents, and CAR CRASHES (none life-threatening, but all severe).  On top of all this, he was having some strange and seemingly unrelated health issues that he was absolutely positive were related to his case (HERE).  After years of MRI’S / CT’S, specialists, the standard array of medications (NSAIDS, NARCOTICS, MUSCLE RELAXERS, and CORTISONE), therapy, and recommendations for any number of surgeries, he decided to make the ten hour trip to Mountain View to get treated.

One of the things I noticed first was that his head was tipped more than just a little bit to the right.  His CERVICAL RANGES OF MOTION were in the toilet (HERE).  Not only were they all severely restricted, they produced a significant amount of discomfort at end-range (me slightly ‘forcing’ them).  There were also some significant TRIGGER POINTS in both upper traps, but much worse on the right.  He had not been able to workout or throw for several years because it would fire up the pain (he could do either without much pain, but would pay for it for several days afterwards) .  I found severe FASCIAL ADHESIONS throughout the area of complaint and broke them up over a period of about an hour and a half.  The change was immediate and significant.

Not only was he essentially out of pain for the first time in years, his ROM was essentially normal — even when I forcefully tested it into end-range.  These initial results lasted for about 10 days.  By two weeks, he was hurting again — maybe not quite as bad as previously, but close.  Seeing this change, however, provided enough optimism for him to make a second trip.  This is where the principle that I call “BULLSEYING” came into play.

When I checked him at the beginning of his second visit, the Trigger Points were still present, but the Fascial Adhesion was at least 80% improved.  After testing several things, I found that the SCAR TISSUE was dramatically better, everywhere but the right side of his neck.  His SCM was still a mess as were its attachment points, including those on the SKULL.  After breaking this up and getting an immediate response like I did on his first treatment, I knew I had found the target — the “Bullseye” if you will.

I not only broke the Fascial Adhesions on the SCM itself, but all around the area, including bony attachment points, and then put him in a DAKOTA TRACTION DEVICE which I sent him home with.  He tolerated it extremely well.  That was approximately a year and a half ago.  I was reminded of this case because I got an email from him this morning telling me how well he was doing, but that he felt he needed to have one more treatment done to clean up any residuals that might still be present.  When he returns, rest assured that we will get him telling his story on VIDEO.