football, youngsters, and the long-term effects of head injuries

FOOTBALL
IS IT SAFE FOR MY CHILD TO PLAY? 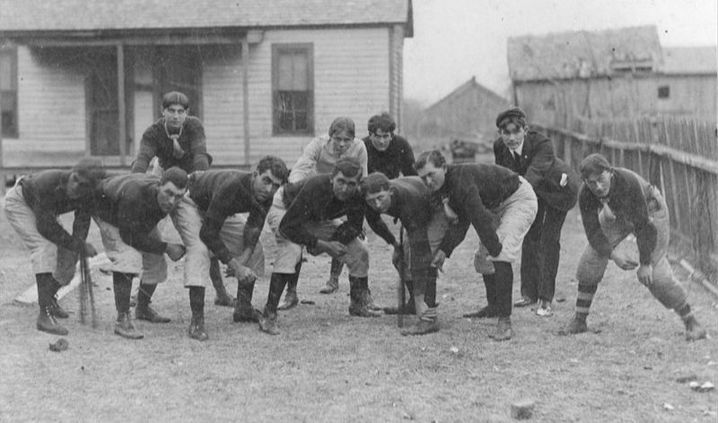 Plano (Texas) High School’s first football team, 1900
It’s a question I am asked increasingly often; “Do you think it’s safe for my child to play football?”  You must understand that, “safe” is a relative term when talking about football.  The truth is, if you play the game for any length of time (say, through high school), you will not come out unscathed.  More than likely, you are going to have some sort of lifetime orthopedic problem to show for your years on the gridiron (trick knee, bum shoulder, roached ankle, messed up hands, chronic neck pain, back pain, etc, etc, etc).  It is heartbreaking to look at people whom I idolized as a kid (EARL CAMPBELL comes immediately to mind) and look at them now.  But honestly, it’s not the orthopedic problems that are making the news, or that people want to talk about today.  People want to know about TBI’s (Traumatic Brain Injuries) and Post-concussion Syndrome.  We’ll get there in a minute, but first I want to share with you my experience as a high school football player — an experience that I would assume is fairly average across America.

I grew up in very rural Kansas (CHASE COUNTY), in a community where Friday nite football was king.  There were no “Mighty Mite” or “Pop Warner” leagues for grade schoolers at that time.  Our early ‘training’ in the sport consisted of playing full contact tackle football at recess or whenever we had enough people for a game.  We started playing ‘official’ football (football with pads) in 7th grade —- after undergoing a 30 second athletic physical that would best be described as little more than a hernia check and then making sure you actually had a pulse.  Our team — the Chase County Bulldogs — were typically a powerhouse program around the period of time I was in school.  Those who know would be the first to tell you that it had nothing whatsoever to do with me or my football prowess (or lack thereof).

I well remember the first time I really got my bell rung.  We were playing Council Grove for the league championship in 8th grade.  Both teams were undefeated, and it was the final game of the season.  Council Grove had two stud running backs (T.B. and T.B.) —- both far bigger and more powerful than my scrawny 95lbs.  I was playing left corner, and when Bolin ran to my side, I hit him way to high (truth be known, I jumped on the guy’s back as he ran past me) and was carried about 10 yards until someone else could knock us out of bounds.

We were in the fourth quarter winning 21-0, so everyone started giving me a good ribbing (“get a saddle” was the one I mostly remember).  Having found the weak link, Grove ran the exact same play on the very next down.  I had already decided that if they ran my way again I was going to lay their running back out or die trying.  When I hit him, all I can remember is seeing an explosion of light.  The coach had to come get me off the field because I was wandering around.  I honestly had no idea where I was (it was kind of like being in a dream).

Later, in high school, I broke my right pointer finger when it got crushed between my helmet and Kent Crawford’s helmet while practicing goal line defense on a freezing cold October afternoon.  To this day, that finger remains the temperature of the ambient air around it (yep, it’s cold right now).  Oh yeah.  I also ended up with a Clay Shovler’s Fracture (spinous of T-1) that I got making a tackle on a kickoff.  To this day it gives me periodic fits with right sided Trigger Points of my traps — particularly if I hit it real hard in the gym.  As for what sort of long-term brain damage there is from getting ‘dinged’ several times over the six years I played organized football, who knows?  I certainly cannot remember as well as I used to, but that could be my nearly 47 years catching up with me.

But back to the question; would I let my child play football? Fortunately, I never had to answer that question with my son.  We have always homeschooled our children, and MALACHI grew up playing SOCCER (mostly with me as his coach).  But in all honesty, knowing what I know now, and seeing what I have seen over the decades in practice I would not.

As a long-time fan of the game, it’s sort of a hypocritical position to take —- kind of like the guy who loves to watch PBR on TV, but wouldn’t dream of getting on a bull himself.  Or letting his son get on that same bull.   Because I have lived in Missouri for so long now, I have become a Mizzou fan via osmosis (I had no real choice living in Tiger country).   Having attended Kansas State back in the 1980’s, I am a die-hard KSU / Bill Snyder fan.  And of course I have rooted for the Chiefs through thick and thin (this year started out thick, but seems to be getting steadily thinner).

On top of that, here in Mountain View, Coach Acklin has pulled a “Snyder” of his own and turned our local team from perennial cellar dweller, to one of the top-ranked 2A teams in the state of Missouri (LIBERTY EAGLES).  But every time I hear an interview with a retired player who’s asked how much pain they have on a day-to-day basis, or see a high school kid with injuries that I know will last a lifetime (HERE is a non-football example), I can’t help wondering if it’s worth it, and what football really matters in the big scheme of things.

Unfortunately, the most recent studies on Football Helmets tell us that the latest technologies do not decrease one’s chances of ending up with a concussion (TBI — Traumatic Brain Injury).  This is problematic because TBI is being associated with everything from AUTOIMMUNITY to DEPRESSION to ABNORMAL BRAIN FUNCTION, to suicide.

The suicide of Junior Seau and recent revelations from Tony Dorsett have made me really stop and take notice of this head injury issue, as did the TBI suffered by the world’s number one hockey player, SIDNEY CROSBY.  It seems that I am not the only person asking these questions.  According to national statistics, little league football (full contact) is down 10% over the past two years, while flag football among the same age group has increased almost 20%.  We all make decisions that could potentially affect the rest of our lives.  Heck, many would say I am foolish because I still ride motorcycles (HERE).  It’s all about weighing the risk / benefit ratio and figuring out what you think is best for you and your children.