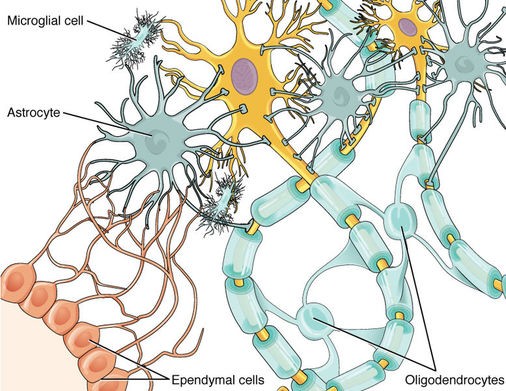 OpenStax College
“Research during the past two decades has shown that glial cells are important players in the creation and maintenance of pathologic pain states, and now perhaps in headache and trigeminal neuropathy as well. More recent work has demonstrated that glial cells dysregulate the actions of opioids such as morphine, a finding that has dramatic implications for the treatment of pain.”  Dr. Linda R. Watkins from a 2009 article (Glial Cells—A New Target for Chronic Pain Treatment) in Neurology Reviews.  There are dozens upon dozens of similar articles.
Today I am reviewing an article by Dr. Forrest Tennant, the editor of the medical journal, Practical Pain Management (Glial Cell Activation and Neuroinflammation: How They Cause Centralized Pain).  Great information, but the truth is, much of it is nothing new — if you Google “Chronic Pain Glial Cells,” you’ll get almost 44,000 hits.

I remember attending one of Dr. Datis Kharrazian’s seminars that was being taught by Dr. Steve Noseworthy of Tampa, Florida (a FUNCTIONAL NEUROLOGIST).  He made the point that not only are the majority of the cells found in THE GUT actually IMMUNE SYSTEM CELLS, but the majority of the cells in the BRAIN are part of the Immune System as well (according to Snell’s Clinical Neuro-Anatomy, the Glial Cells outnumber neurons by as much as 10 times, comprising half the total volume of both the brain and spinal cord).   The cells in the brain that he was specifically referring to are called Glial Cells.

Glial Cells, according to a popular online encyclopedia, “are non-neuronal cells that maintain homeostasis, form myelin, and provide support and protection for neurons in the brain and peripheral nervous system.”  Some of their specific functions involve surrounding and supporting neurons (nerve cells) and holding them in place, supplying both nutrition and oxygen to the neurons, acting as an insulating cover over the neruons, regulating and maintaining the fluid that surrounds the neurons and nerve junction points (synapses), getting rid of dead neurons, and destroying pathogenic invaders (i.e. the Immune System function).  Recent neuroscience is even telling us that certain Glial Cells are important in creating nerve synapses (the connecting points between nerve cells that allows the transmission of various messages), as well as aiding in the transmission of nerve impulses — something that until recently, was not thought to occur.  It is also believed that Glial Cells are the building blocks that make up the “blood / brain barrier”.  I bring all of this up to let you know that even though you have probably not heard of them, Glial Cells are important — critically important.   Oh; they also play a huge role in the development of Chronic Pain.

Dr. Tennant begins his paper by telling us that, “Glial cell activation and neuroinflammation are known to be one of the underlying causes of centralized pain (CP) and many of its comorbidities, including depression, fatigue, and insomnia.   Activation of glial cells leads to an ongoing pathologic process in the central nervous system (CNS) that includes neuroinflammation, glial cell dysfunction (GCD), cellular destruction, hyperarousal of the sympathetic nervous system, and stimulation of the hypothalamic-pituitary complex.”  Why do I find all of this to be intriguing?  Why should you?  Maybe because both DEPRESSION and FATIGUE are so ubiquitous in our culture.  And even though you may not have heard of them, some of these other symptoms such as SYMPATHETIC DOMINANCE (“hyperarousal of the sympathetic nervous system) and “STIMULATION OF THE HYPOTHALAMIC PITUITARY COMPLEX” are exceedingly common as well.  He also mentions the role that Glial Cells play in various neurological pain syndromes.

Dr. Tennant goes on to say that Glial Cells, “are the resident immune cells in both the brain and spinal cord and are vigilant for any type of toxic challenge, including injury, infection, and ischemia.   Once activated, they take on a role similar to that of a peripheral macrophage, in that, they enlarge, migrate, and can become phagocytic and remove toxic matter“.  In English, this means that any substance(s) that the brain and nervous system feels are foreign, wind up getting attacked by these Immune System cells that act by completely engulfing and then dissolving the offending invader.  But what happens if the invader is not really an invader?  What if your Immune System happens to be attacking your body’s own cells and tissues (i.e. AUTOIMMUNITY)?  Not only is this problem exceedingly common, but Dr. Tennant says that it is related to the release of Glutamate — a common amino acid (protein) found commonly in the body.

Dr. Tennant goes on to talk about the fact that when the cells of either the Central Nervous System or Periphreal Nervous System are damaged, they, “secrete numerous factors including pro-inflammatory cytokines.”  If you have followed my blog, you will realize that these are the very chemicals that we collectively refer to as INFLAMMATION (more on INFLAMMATION).  Some of the specific problems that Dr. Tennant refers to as being able to cause this Neuro-inflammation include, “stroke, MULTIPLE SCLEROSIS, PARKINSON’S DISEASE, encephalitis, TRAUMATIC BRAIN INJURY, DISCOGENIC SPINAL DEGENERATION, NEUROPATHIES, ARTHROTHAPIES, FIBROMYALGIA, INTERSTITIAL CYSTITIS, and vulvodynia [vaginal pain].”  After providing a chart showing how GLUTAMATE (think MSG here) is released from injured cells in a Chronic Pain cycle, he goes into detail in explaining how these people almost always have symptoms of SYMPATHETIC DOMINANCE.  That is, their Sympathetic Nervous System (fight or flight) is over-riding their Parasympathetic Nervous System (contentment, digestion, relaxation).

Dr. Tennant then talks about inflammatory processes of the body, specifically mentioning “CANCER, Rheumatoid Arthritis, and ALZHEIMER’S DISEASE“.  After telling us that he believes, “neuroinflammation is likely the same basic process as peripheral inflammation that occurs in muscles or joints“, he hits us with his grand finale.  “Glial Cell activation may produce a number of pathologic sequelae in the Central Nervous System, including neuroinflammation, cellular destruction, Glial Cell Destruction, stimulation of the Sympathetic Nervous System, and hyperarousal of the Hypothalamic-Pituitary complex.  The memory of pain may be trapped or centralized in this pathologic process, and several comorbidites, including Depression, Fatigue, Anxiety, and Insomnia may result.  The diagnosis of Centralized Pain is a clinical one, based on history and physical findings that result from Glial Cell activation and neuroinflammation.”  Did you catch that last sentence?  The diagnosis of Centralized Pain is “clinical“.  This means that there are no tests you can have that tell your doctor whether or not this happens to be your problem.  This is why so many people go to their doctor and get the “deer-in-the-headlights” stare.  After all, the tests are all ‘normal’.

Although Dr. Tennant does not go into any detail in this article about how one would go about solving this problem, I would love to give you what I believe to be a great starting place would be.  The very first thing that I would do is to read everything you can about INFLAMMATION.  Learn what it is, what causes it, and how to squelch it without drugs (ANTI-INFLAMMATION DRUGS and CORTICOSTEROIDS have brutal side effects — particularly with long-term use).  From there, it is a matter of getting all potential drivers of Inflammation out of your system and doing what it takes to restore your health.  Bear in mind, you may have some very specific BRAIN REHAB to do, as well as some very specific nutritional supplements to take.  However, the starting point for everyone is essentially going to be the same.  HERE are several articles to get you started.