how important is the relationship between gut health and inflammation?

GUT HEALTH AND INFLAMMATION
MORE IMPORTANT THAN YOU EVER DREAMED 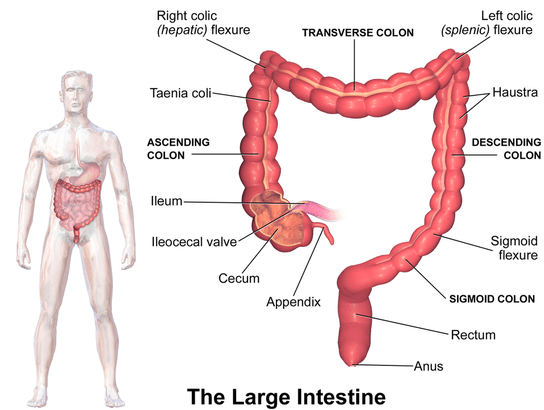 BruceBlaus
“Health results primarily from a matched Diet AND Gut Flora, with minor contributions by exercise, personal genetics, environmental toxins, etc.  You can eat the extremes of just meat or only vegetables or any mixture and be healthy, as long as your gut flora is made up of about two hundred different species of bacteria that can fully digest the soluble fiber in your diet.  Health requires a gut flora adapted to your diet.  Those bacteria, the gut flora, produce all of your needed vitamins, eliminate constipation, block inflammation and control the development of your immune system, which takes place in the lining of your intestines in response to gut bacteria.”  Dr. Art Ayers from Cooling Inflammation
Yesterday I discovered Dr. Art Ayers’ website, “COOLING INFLAMMATION“.  It is, no pun intended, one of the ‘coolest’ sites on the web.  Dr. Art is a Molecular Biologist who has done post-doctorate work at both Mizzou (three hours north of me) and Kansas State (my alma mater), as well as Harvard.  The biggest thrust of his research seems to be the relationship between SYSTEMIC INFLAMMATION and GUT HEALTH — with a particular interest in GUT FLORA.  And listen to this.  Some of the particulars that he specifically lists on his site as being of chief interest to him include many of the same things we have discussed on this site.

Stop for a moment and think about this list.  Not only are all these considered to be “Inflammatory Conditions,” I have shown you that they can frequently be dealt with by restoring Gut Health.  This is why “Alternative Healers” have been telling their patients for decades (probably centuries) “Heal the Gut, Heal the Body“.  The doubly cool thing is that when you look at this list, you quickly realize that the phrase, “and Heal the Mind” could have easily been tacked on to the end of the phrase as well.  It is always refreshing to see a true scientist tackling these topics, as opposed to a “half-cocked, dimwitted, back cracker” like myself (a description from an email I received awhile back).

I want to leave you with a few quotes from the posts that were found in various articles on his homepage at the time I wrote this.  Below is from a post about EPIGENETICS.  “The health of your gut flora (the interacting trillions of bacteria of a couple of hundred different species that make up the pound of bacteria that you carry primarily in your large intestines) is more important than your genetics to your overall health.  Thus, your health is a result of diet, gut flora adapted to your diet and exercise.  Everything else, your genetic risks, environmental toxins, etc. are of only minor impact.   I am trying to paint the big picture of how the food that you eat and your gut flora interact to determine your health, by which I mean whether you get sick, become obese and/or bloat with gas.”  In other words, there are factors that can turn genes on or off.  Diet, Inflammation, and Gut Health are three of the biggest.  This means that you are not as controlled by your genes as you have always been led to believe.

A number of years ago, I told you that 80% OF THE IMMUNE SYSTEM IS FOUND IN THE GUT.  Furthermore, I showed you that the Gut is responsible for a wide variety of functions that up until recently, no one knew much about (HERE). I even showed you how things like SEX DRIVE and Obesity are intimately linked to your Gut Flora (OR LACK THEREOF).  Listen to what Dr. Ayers says about the relationship between something called DYSBIOSIS (too many bad bacteria, not enough good bacteria) and a wide range of different health problems.  “Recent studies have demonstrated the role of gut bacteria in producing nutrients, vitamins and neurotransmitters….  Chronic change of gut flora in this way leads to obesity.  Other types of dysbiosis contribute to infections, cancer, autoimmune disease, allergies, food intolerances, gas and bloating.”  Trust me when I tell you that his short list is the tip of the iceberg.

This quote is cherrypicked from a post that Dr. Ayers did on SUPERBUGS — bacteria that become resistant to ANTIBIOTICS.  “Persistent use of an antibiotic will spread resistance to a particular antibiotic through the gut flora, facilitated by antibiotic resistant plasmids…..   Hospital staff would be expected to be natural repositories for multiple resistance genes, especially if they are exposed to any antibiotic (or pharmaceutical.)  Mixing megatons of bacteria in the guts of billions of people with tons of antibiotics, and still more in sewage treatment plants and agriculture, is bound to produce bacteria with every type of multiple antibiotic resistance plasmid imaginable.  But that is not the biggest problem, since fingering the commercial use and misuse of antibiotics ignores biggest exposure of bacteria to antibiotics.  It ignores the fact that most popular pharmaceuticals, NSAIDs, statins, anti-depressants, anti-diabetics, etc., also have substantial antibiotic activity.  Most of these pharmaceuticals started out as phytoalexins and then were found to also have pharmaceutical activity.  Pharmaceuticals are just repurposed natural antibiotics.  When you take an aspirin or Metformin or a statin, you are taking an antibiotic.  When you take a pharmaceutical, you are selecting for multiple antibiotic resistance plasmids in your gut flora and you may be making the next superbug.”  Did you catch that?  Not only do Antibiotics cause Antibiotic Resistance, but so do NSAIDS, STATINS, ANTIDEPRESSANTS, ASPIRIN, and DIABETIC DRUGS, not to mention others.

Dr. Ayers is a true believer in natural health.  His three daughters were DELIVERED AT HOME, and his wife (a nurse) was a La Leche League leader and International Board Certified Lactation Consultant for well over two decades.  Listen to what he not only says about mother’s milk, but the importance of BACTERIAL TRANSFER IN DELIVERY.   “Milk is a baby’s first prebiotic and a major function of mother’s milk is to prevent adult gut bacteria from inflaming a newborn’s gut, before the gut is sealed up and a new immune system is developed. Formula companies scurry to get parents hooked on their expensive substitutes that promise ease of use and nutritional equivalence, but the sad truth is that these artificial milk substitutes undermine baby gut flora with tragic results.  Even in the rare cases where mothers are not able to breastfeed their babies, there is a safe alternative, donor milk banks….   Breast milk is nutritive for the newborn, but it also establishes the baby’s gut flora.  It is the quality of the gut flora, which species of bacteria, that determines if a newborn will thrive or die.  If the baby is delivered by Caesarian, then her first gut flora will resemble the nursery staff.  If she forces her way out the old fashioned way, her first flora will resemble her mother’s vaginal flora.”  When I think of how far off this track modern medicine has gotten, it frankly ticks me off — especially when it comes to our babies and children.

Yes folks; there is a relationship between Gut Bacteria and health — a powerful relationship (HERE).  Here we are learning about the relationship between Dysbiosis, Inflammation, and Chronic Disease,  when just a few days ago, I showed you how a HIGH CARB LIFESTYLE feeds both Dysbiosis and Inflammation (HERE).  I hope you are starting to notice that in many ways, all disease, as well as the solutions to them, are really just one big thing (HERE).  If you have not already done so, I would strongly advise those of you who are dealing with CHRONIC INFLAMMATORY DEGENERATIVE DISEASES to bookmark Dr. Ayers’ site to your list of favorites.  You should also consider checking out my post on FECAL TRANSPLANTS as well.
Share on facebook
Facebook
Share on twitter
Twitter
Share on linkedin
LinkedIn
Share on pinterest
Pinterest
Share on reddit
Reddit