STILL THINKING ABOUT GETTING YOUR ANNUAL FLU SHOT?
YOU MIGHT WANT TO RETHINK THAT 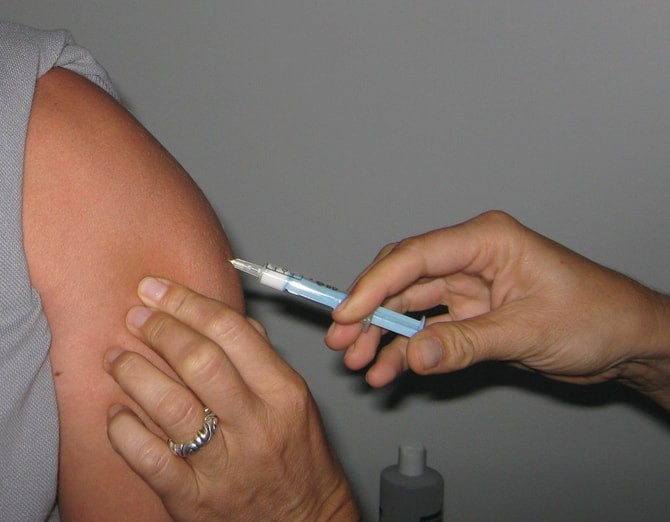 Grook Da Oger
It’s that time of year again folks; the time when taxpayer-funded PSA’S choke the airwaves with their fear-laden warnings — warnings that this season is going to be the worst flu season ever, so bless your sweet bippys, you had better get your flu shot today!  That’s right; even though experts are admitting that last year’s vaccine was somewhere between 0% and 15% effective last year, make sure you get vaccinated this year.  This despite the new study saying that consecutive years of flu vaccine lower its effectiveness rather dramatically (HERE).

As is often the case, OUR GOVERNMENT is once again acting as BIG PHARMA’S shill. In last week’s issue of Morbidity and Mortality Weekly Report (Influenza Vaccination Coverage Among Health Care Personnel — United States, 2015–16 Influenza Season), we find the CDC complaining about the fact “only” 79% of health care workers received their annual flu shot; up two percentage points from the previous year.  Truth is, if it were not forced on them by numerous employers (HERE), you would see an even lower rate than you already are — probably much lower (HERE).

This begs the question of why so many people in healthcare — smart people who supposedly know better — have no interest in getting vaccinated against the flu; even though there is no monetary cost associated with doing so.  It boils down to what’s known in the medical field as “EVIDENCE-BASED MEDICINE” or EBM.  EBM is defined as, “The conscientious, explicit, and judicious use of current best evidence in making decisions about the care of individual patients.”  In other words, doctors are not supposed to ignore peer review — something they’ve done for decades — even if they don’t like or agree with it (another example — HERE).  Unfortunately, ignoring peer review is alive and well in the medical field, particularly when it comes to flu vaccines (HERE).

A great example comes from the latest issue of the oldest scientific journal in the US, Scientific American (A Guide to the Changing Science of Flu Shots).  “Some recent studies have suggested that getting a yearly shot may actually diminish the benefit of successive vaccinations. Others have raised the possibility that statins—the commonly used cholesterol-lowering drugs—may actually interfere  with your immune system’s response to influenza vaccine. Meanwhile, the Centers for Disease Control and Prevention recently recommended against the use of the nasal mist vaccine that many kids prefer over injected vaccine.”  We already know that STATINS are bad news. Period.  What the last piece of this quote is not telling you, however, is that the nasal mist vaccine was dumped because it’s shown 0% efficacy for flu prevention for the past several years (HERE).

Their article touts the usual stats by the CDC saying that flu vaccines are on average, 50 to 60% effective.  As the gold-standard of medical research, the Cochrane Review has repeatedly shown you (HERE and HERE), this is not even remotely close to being true.  And it’s not just America where flu vaccines are ineffective.  Over the course of the past few flu seasons, The Conversation (Why Have People Turned Their Backs on the Flu Vaccine This Year?) reported that England has seen the efficacy rates of flu shot drop to an abysmal 3%.  That’s right folks; not a misprint.  Knowing what I know about mathematics and statistical relevance, I’m not even sure how you measure 3%.

Bottom line; you’ll have to take care of your own health as far as the flu is concerned, because relying on vaccines is not only making the problem worse, it’s creating some nasty new problems via MERCURY and ALUMINUM toxicity (HERE).  The result of all of this is that growing numbers of people are, in response to evil individuals like me, declining at least some of THESE SHOTS — particularly the flu shot.  Case in point, the newest issue of Pediatrics carried a study called Complementary and Alternative Medicine and Influenza Vaccine Uptake in US Children that stated, “Some CAM (complementary and alternative) practitioners recommend against vaccination, and children who saw naturopathic physicians or chiropractors were less likely to receive vaccines and more likely to get vaccine-preventable diseases.”  Frankly, I want my children to get some of these ‘vaccine preventable‘ diseases. Huh?

Why would I want my kids to get sick periodically with preventable illnesses like the flu or Chicken Pox?  It’s the HYGIENE HYPOTHESIS in action.  Plainly stated, we are starting to understand not only that these shots can be extremely dangerous (HERE), but that having to use your own immune system to mount immune responses provides tremendous widespread benefits over the long haul (HERE).  Thus, the question should not be, “is my kid likely not to get the flu if I decide to get him / her vaccinated,” it should be, “do I really want to swap short-term childhood diseases that everyone used to get for CHRONIC INFLAMMATORY and AUTOIMMUNE DISEASES that can’t be cured?

For those of you who don’t believe that CHIROPRACTIC ADJUSTMENTS are a good treatment for individuals with the flu; you fail to understand both the immune system and history.  The truth is, in the face of the greatest and most deadly flu pandemic the modern world has ever seen (HERE), the one treatment that not only seemed to work best, but actually worked at all was Chiropractic.  Be aware that although it’s certainly a huge part of it, “Chiropractic” does not simply mean adjustments.  It can mean some of the things on THIS LIST as well.