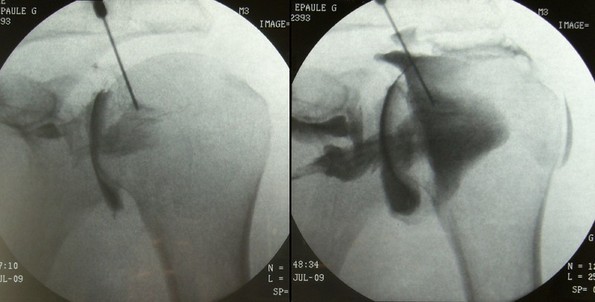 Image by Zezounet
Although CORTICOSTEROID INJECTIONS are one of the most common medical treatments for pain in the shoulder as well as pain in other joints (spine included), are they really the best option?  Back when synthetic cortisone was first invented just after WWII, it was hailed as another of the “medical miracles” of the 20th century —- right up there with ANTIBIOTICS.  However, just like antibiotics, we would soon learn that things weren’t always as they appeared.

When the earliest clinical trials begin to appear in the early-mid fifties, serious doubts were raised about cortisone’s seemingly “magic” powers.  For instance, in one early experiment (1954), more than half the patients who received a cortisone shot for tennis elbow or other tendon pain suffered a relapse of the injury within six months.  But that cautionary study (as well as others) didn’t slow the ascent of cortisone injections as a mainstream treatment because of their propensity for immediate pain relief.   Here we are in 2011, and believe it or not, cortisone shots continue to be the gold standard for TENNIS ELBOW, SHOULDER PAIN, and other MUSCLE / TENDON problems, as well a WHOLE HOST OF OTHERS.  Why do I bring all of this up?

In a study scheduled for publication in the December issue of the Archives of Physical Medicine and Rehabilitation, researchers reported that lower doses of corticosteroids were just as effective as higher doses in terms of reduction of pain, improved range of motion, and duration of effectiveness.  But what does this really mean?  Are these patients really improving, or is the whole thing a house of cards —- an illusion built with smoke and mirrors?  I would contend that the question the researchers are attempting to answer is not a valid question to be asking in the first place.  Allow me to explain.

The researchers were trying to determine which dose of corticosteroid is best for the shoulder —- a 20 mg injection or a 40 mg injection.  The question is moot.  It’s kind of like asking which will make you sicker, drinking one gallon of turpentine, or drinking two.  If you think that I am over-exaggerating the situation, jump in my time machine and allow me to take you back just one short year.

The biggest ever meta-analysis of its kind appeared in one of the world’s oldest and most respected medical journals, The Lancet, one year ago last month.  Listen to the results of this study, which was essentially a study of numerous other previously done studies on the same thing (say that three times fast!).  “3,824 studies were identified and 41 met inclusion criteria, providing data for 2,672 participants. We showed consistent findings between many high-quality randomized controlled trials that corticosteroid injections reduced pain in the short term compared with other interventions, but this effect was reversed at intermediate and long terms…  Despite the effectiveness of corticosteroid injections in the short term, non-corticosteroid injections might be of benefit for long-term treatment.”

Here is what is almost comical about these conclusions.  Some of these “non-corticosteroid injections, that according to the authors, “might be of benefit for long-term treatment,” include things like BOTULISM TOXIN (Botox), Prolotherapy (sugar water injections), Apropitn (The drug was temporarily withdrawn worldwide in 2007 after studies suggested that its use increased the risk of complications or death, and was entirely and permanently withdrawn in 2008, when follow up studies confirmed the original result), PLATELET RICH THERAPY INJECTIONS (which I have never one single time seen work), and even saline (salt) solution — or nothing at all (HERE).

What did the researchers actually have to say about these “wonderful” non-steroidal injection therapies that they are at least on some level, promoting via their mere mention?  “Lauromacrogol (polidocanol), aprotinin, and platelet-rich plasma were not more efficacious than was placebo for Achilles tendinopathy, while prolotherapy was not more effective than was exercise.”  Unfortunately, none of this even begins delving into the fact that the study also stated (not surprisingly) that, “Adverse events were also reported“.  Or should I say, “UNDER-REPORTED“?

The reviewers determined that, for most of those who suffered from tendinopathies, cortisone injections did bring fast and significant pain relief.  However, when the patients were re-examined at 6 and 12 months, the results were substantially different. Over all, people who received cortisone shots had a much lower rate of full recovery than those who did nothing or who underwent therapy. They also had a 63 percent higher risk of relapse than people who adopted the time-honored wait-and-see approach.  Great stuff, that cortisone!  It doesn’t work, but has ugly  side effects.  Just what we all wanted!  Just like the good ole days in 1954!

Why cortisone shots would even be imagined to be of benefit in the healing process of tendon problems in light of current medical knowledge is beyond me.   But this question was essentially answered in a Lancet-published response to the study.   For decades it was widely believed that tendon-overuse injuries were caused by inflammation, said Dr. Karim Khan, a professor at the School of Human Kinetics at the University of British Columbia and the co-author of a response to the above response. The injuries were, as a group, given the name tendinitis, since the suffix “-itis” means inflammation. Cortisone is an anti-inflammatory medication. Using it against an inflammation injury was logical.

But in the decades since, numerous studies have shown, persuasively, that these overuse injuries do not involve inflammation. When animal or human tissues from these types of injuries are examined histologically, they do not contain the usual biochemical markers of INFLAMMATION.  Instead, the injury seems to be degenerative. The fibers within the tendons fray. Today the injuries should be referred to as tendinopathies, or “TENDINOSIS“.  Although you will see this reflected in the ICD-10 codes found on the HCFA forms doctors use to submit to insurance companies, it has certainly not filtered down to EVERYDAY DOCTORS treating patients with shoulder, knee, elbow, wrist, or other joint / tendon problems.

Why then does a cortisone shot (an anti-inflammatory drug) seemingly work in the short term in regards to non-inflammatory injuries?  The injections seem to have “an effect on the neural receptors” involved in creating the pain in the sore tendon, Dr. Khan said. “They change the pain biology in the short term,” but, he said, cortisone shots do “not heal the structural damage” causing the pain. Instead, they actually “impede the structural healing.”

So the question of whether cortisone shots still make sense as a treatment for tendinosis, depends, as Dr. Khan said, on how you choose “to balance short-term pain relief versus the likelihood” of longer-term negative outcomes. In other words, is reducing soreness now worth a significantly increased risk of delayed healing and possible relapse within the year?

To many patients and their all-too-ready-to-inject doctors, that answer frequently remains yes. There has always been and always will be the desire for a magic bullet — that elusive cure-all that will take care of anything and everything (HERE’S MINE).   My goal for all of my patients is to GIVE THEM A GOLD BRICK, hopefully leaving them much better off than when they came in.  I feel like I am accomplishing this as well as anyone out there.  Because I believe in a different kind of “EVIDENCE“, you can view some of our PATIENT TESTIMONIALS, by just clicking the link.