the paleo diet: to bean or not to bean?

THE PALEO DIET
WHAT ABOUT BEANS? 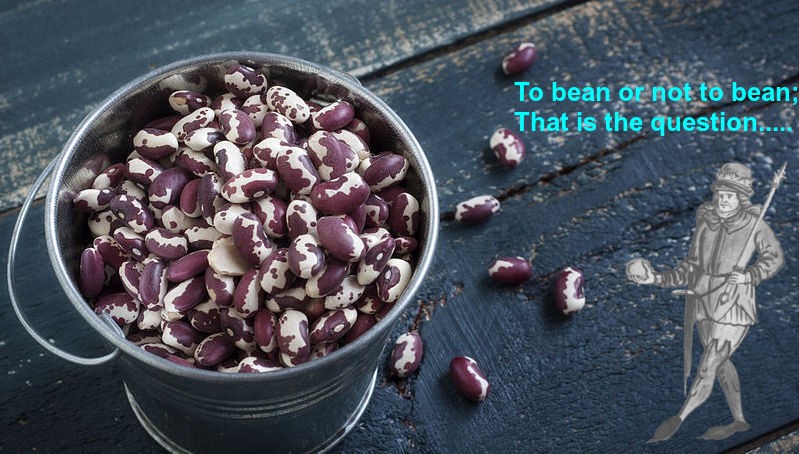 Nomadic Lass
Beans beans, musical fruit, the more you eat, the more you toot, the more you toot, the better you feel, so eat those beans at every meal.  – Ancient wisdom from Joe the Hobo (circa 1933)
What a dichotomy; Hamlet -vs- Joe the Hobo!  While I’m not too sure about eating beans at every meal (a lot of people certainly used to), it brings up a question I’m asked regularly, Hey Doc, what about beans… can I eat them on my Paleo Diet? Not that I’m itching to tackle this topic, but I’ll address it briefly so I can stick it in my post on how to do an ELIMINATION DIET the right way, the first time. While some Paleo adherents are extremely (extremely) strict with their diets due to any number of factors (some legitimate, some dogmatic), as long as you are not chronically INFLAMED or AUTOIMMUNE, I tend to allow a bit more lenient version with my patients — so long as you test yourself against what you are eating.

Let me start by saying that I do not consider SOY to be included in the type of beans we are discussing today.  It is it’s own category and for a number of reasons, something that most of us have no real business putting in our mouths — especially here in America where 100% is GMO.  As you do your Elimination Diet, some of you are going to discover that beans act more like GRAINS in your body, while others will find that you can consume beans, at least periodically, without any problems whatsoever.

If you spend any time studying this issue (beans on a Paleo Diet), you’ll notice that many people get wrapped up in their particular definition of what a PALEO DIET is and what it should look like.  These people (some of them much smarter than I) usually bring up the fact that beans contain large amounts of some of the same potentially problematic compounds (anti-nutrients) as grains — namely phytic acid and lectins.  However, a quick peek at PubMed reveals that there are any number of “healthy” foods that have at least as much or more (sometimes many times more) phytic acid than beans or legumes.

Foods like spinach, certain kinds of greens, nuts such as almonds or pecans, dark chocolate, along with any number of others, all have as much or more phytic acid as beans.   Don’t get me wrong; this can certainly be an issue for some people because phytic acid has the potential to block absorption of some minerals (zinc and iron tend to be highest on this list) as well as potentially adversely affecting specific DIGESTIVE ENZYMES.  Not surprisingly, one of the WILDEST ARTICLES I came across while researching this subject came from the always-interesting Richard Nikoley, over at Free the Animal (Down the Rabbit Hole: when Phytate Becomes a Nutrient).  As for lectins…….

Lectins are specific kinds of proteins that bind to sugar.  If you really want to understand what lectins are, as well as their potential relationship to LEAKY GUT SYNDROME, I would suggest you read Ryan Andrews’ ALL ABOUT LECTINS over at Precision Nutrition — a short article that packs a lot of punch. The most intriguing aspect of his article was his statement that, “Because we don’t digest lectins, we often produce antibodies to them. Almost everyone has antibodies to some dietary lectins in their body. This means our responses vary. Certain foods can even become intolerable to someone after an immune system change or the gut is injured from another source. The presence of particular lectins can stimulate an immune system response.”  What does this mean really?  That some of us (emphasis on “some”) are going to have issues with lectins — undoubtedly those of us with SICKER GUTS.

The bottom line is that there are any number of foods that Paleo Rightists and Paleo Leftists argue over — beans being one of the biggies.  There are slews of others.  For instance, even though liquid milk presents a problem for me personally, I can do cheese with no problem whatsoever.  I also realize some would call me a “Paleo Heretic,” while signing the order to have me burned at the stake.  But, as the brilliant ART AYERS once said (I’m loosely quoting from memory here), it doesn’t matter so much whether your diet is vegan or Paleo, it’s more about having the proper GUT FLORA to break down whatever it is you are eating.

One last mention before signing off; a big part of the issue with beans probably has to do with FODMAPS.  Thus, if you have IBS, IBD, or something similar, make sure you know a little something about this topic.

Like anything having to do with nutrition, you’ll find an almost endless number of opinions — certainly true when it comes to beans / legumes.  Maybe it’s just because I like them too blasted much to give them up totally (my wife and daughters make wicked good chili and ham & beans).  However, I do think that if you are going to eat them, you should test yourself.  How? By doing the Elimination Diet I talked about earlier.  If you are chronically sick or living with CHRONIC PAIN, it’s an integral part (it’s actually the first step) of creating your own personal EXIT STRATEGY.