thyroid or hypothalamus?  which is to blame for your obesity?

WHICH IS MORE LIKELY RELATED TO OBESITY;
HYPOTHALAMUS DYSFUNCTION OR THYROID PROBLEMS? 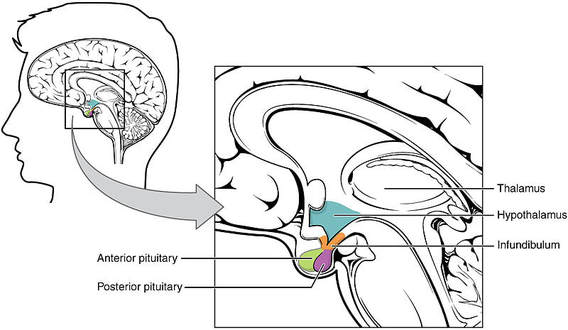 OpenStax College
The title of my post would imply that I am letting people off the hook by saying that either their THYROID or HYPOTHALAMUS is responsible for the fact that they are OBESE.  This is not generally the case.  No one likes to hear this, but unless your specific situation is obviously GENETIC, your health is your responsibility.  Regardless of why you have ended up where you are at today, let me show you some new research and talk about some things that might help you get your life back on track.

A few years ago, one of the most brilliant physicians on the planet (Dr. Datis Kharrazian) published a paperback book specifically written for patients with Thyroid problems.  The name of the book is Why Do I Still Have Thyroid Symptoms? When My Lab Tests Are Normal?  The book is an excellent primer on the relationship between the Immune System, the Endocrine System, the Brain / Nervous System, and the Gut.   It seems that the medical community just might be coming around to this way of thinking.  In a recent study by Kentucky endocrinologist, Dr. Saad Sakkal; we find him pitching the Hypothalamus (a part of the brain) as the primary culprit in a great deal of obesity cases.  Although the study is yet to be published, it was presented at last week’s annual meeting of American Association of Clinical Endocrinologists in Las Vegas (“Why Obese Patients May have Normal Thyroid Tests Despite ‘Thyroid Symptoms‘”).  If you follow my site, all of this is old news.

Earlier this year, I published a post on the relationship between Obesity and Hypothalamus Dysfunction (HERE).  While quite small in size, the functions of the Hypothalamus are numerous and significant.  It controls things like LIBIDO, FERTILITY, Emotions, Motivation, Circadian Rhythms (sleep / wake cycles), Body Temperature, and Hunger.  This is probably why Dr. Sakkal reported that the symptoms of the people (mostly women, as is the case with the vast majority of those with ENDOCRINE DISORDERS) in his study of Obese individuals with the appearance of Thyroid Dysfunction.

Although some of these are symptoms of Thyroid Dysfunction, Dr. Sakkal says that if you have three of four of the above symptoms, you “likely” have a HYPOTHALAMUS issue.  If you have four or more, you are “definite”.  Dr. Sakkal concluded that this problem is not only common, but relatively easy to diagnose clinically (without tests).  Which all begs the question of how he and others are treating this condition.

Although he and his team treat these problems with multiple drugs, I am not convinced that in many maybe most) cases, drugs are the best options.  The vast majority of the chemicals and neurotransmitters your body makes and uses are on negative feedback loops.  In other words, they work just like a thermostat on your heater.  When the temperature gets too low, the thermostat senses this and triggers your furnace to kick on.  Once the temperature regulates, the thermostat turns the heater off again.  When you take drugs / medications, your body senses that it has enough of whatever particular chemical you are taking into your body.   This, in turn, shuts down endogenous production.

If you want to start turning the tide on this problem, seek out someone trained in Functional Neurology who knows how to get your brain firing properly again.  Next, you’ll have to figure out what is driving INFLAMMATION in your body (GLUTEN, Heavy Metals, Parasites, ENDOCRINE-DISRUPTORS, etc, etc).  There are several NUTRITIONAL SUPPLEMENTS that could benefit you as well, including Standard Process’s Hypothalamus PMG.  As far as other steps, many are general and could benefit the better portion of the population (HERE).

Dr. Schierling is licensed chiropractor and world-renowned for intervention with persistent chronic pain. Dr. Schierling focuses on a holistic approach to helping end his patients’ chronic pain that includes Scar Tissue Remodeling Therapy.
All Posts »
PrevPreviousmore benefits of chiropractic care
Nextlibido as an indicator of healthNext