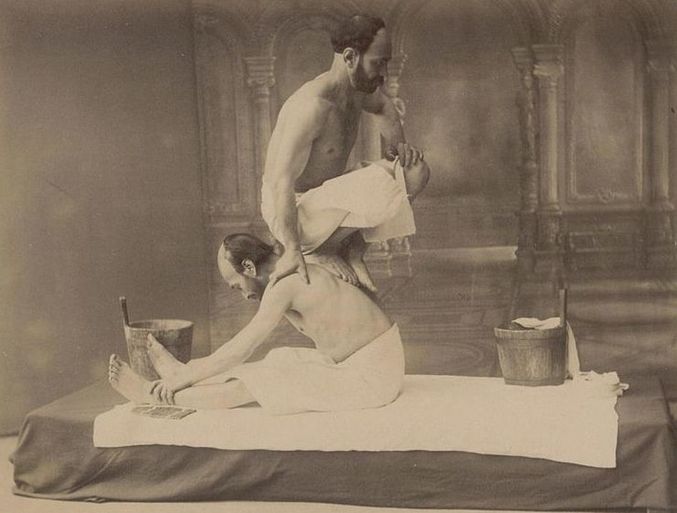 In Clinical Application of Neuromuscular Techniques by Dr Leon Chaitow and Judith DeLany list some of the primary and secondary causes of Trigger Points.

Or, if you had an extra $200 laying around, you could purchase the ‘bible’ on Trigger Point therapy — Travell and Simons’ Myofascial Pain and Dysfunction: The Trigger Point Manual.  You see; Dr Janet Travell was, for a time, JFK’s physician.  She figured out a way to help him with the pain he had due to injuries he received in WWII (PT 109), and along the way, developed the current theory of Muscle Trigger Points (MTrP’s).  Then in the early 1980’s, along with a doctor named David Simmons (a disciple of hers), published the fore mentioned book.  According to Drs. Travell and Simons, Trigger Points are defined as, “hyperirritable spots in skeletal muscle that are associated with palpable nodules in taut bands of muscle fibers.”  In other words, they are small, hard muscle knots.  A review of the scientific literature on Trigger Points was published in a 2007 issue of The Clinical Journal of Pain, describing the four most common diagnostic criteria of Trigger Points.

This went along hand in hand with what Dr. Travell herself had described in her work.

“This paper is a narrative review of normal cervical alignment, methods for quantifying alignment, and how alignment is associated with cervical deformity, myelopathy [neurological problems caused by cord irritation], and adjacent-segment disease (ASD) [DEGENERATION], with discussions of health-related quality of life (HRQOL).  Popular methods currently used to quantify cervical alignment are discussed including cervical lordosis….    Evidence from a few recent studies suggests correlations between radiographic parameters in the cervical spine and HRQOL. Analysis of the cervical regional alignment with respect to overall spinal pelvic alignment is critical. The article details mechanisms by which cervical kyphotic deformity potentially leads to ASD.  Sagittal alignment of the cervical spine may play a substantial role in the development of cervical myelopathy as cervical deformity can lead to spinal cord compression and cord tension.”

What is dumbfounding when reading this article is that the authors — spinal neurosurgeons — almost sound like chiropractors.  They say things like, any amount of FORWARD HEAD POSTURE causes “an increase in cantilever loads…“.   Furthermore, they unequivocally tell us that the worse the Forward Head Posture, the worse the quality of life (HRQOL).  But here is where the rubber meets the road.  According to these surgeons, the various regions of the spine (cervical, thoracic, lumbar and pelvic areas) are not independent from each other.  The alignment of one affects the alignment of the others.  To top it all off, they admit that alignment affects function; and loss of function causes pain and degeneration (ASD).  The bottom line is that things like alignment and posture matter (the next thing you know they will be telling us that these problems could actually lead to sickness and disease — HERE).  Interestingly enough, loss of normal cervical (neck) curve can not only be measured, but it can effect the cord itself and lead to DJD and severe neurological problems.  I bring all this up because of the work of Dr. Donald Harrison.

It’s almost comical to watch the medical community make these huge “breakthroughs” —- particularly when the chiropractic profession has been saying these very things for decades.  Although he passed away in 2011 leaving his son Deed and others to carry on his work, the elder Harrison’s accomplishments cannot be overlooked.  Dr. Harrison received a doctorate in Applied Mathematics and a master’s degree in mechanical engineering after becoming a chiropractor.  He eventually founded Chiropractic Bio-Physics (CBP), which, over the past two-plus decades, has published approximately 150 peer-reviewed papers in scientific / medical journals on this very topic.

I have found that simply adding “EXTENSION THERAPY” to my clinical protocols (I personally like the Dakota Traction device from Dr. Mark Payne) can not only dramatically improve outcomes, it seems to help many people who struggle with hardcore Trigger Points of their upper traps.  But, in order for Cervical Extension Retraining Devices to be effective, range of motion in the cervical spine must be dealt with on both a sectional basis (Tissue Remodeling) and a segmental basis (Chiropractic Adjustments).  Trying to create cervical extension (put your head back as far as you can to see what I mean) without addressing both the sectional and segmental motion abnormalities (SUBLUXATION and FASCIAL ADHESIONS) can cause real problems as well as pain    (WARNING: Do not try Cervical Extension at home without a trained individual first determining if you are a good candidate, and then receiving instruction on how to proceed).