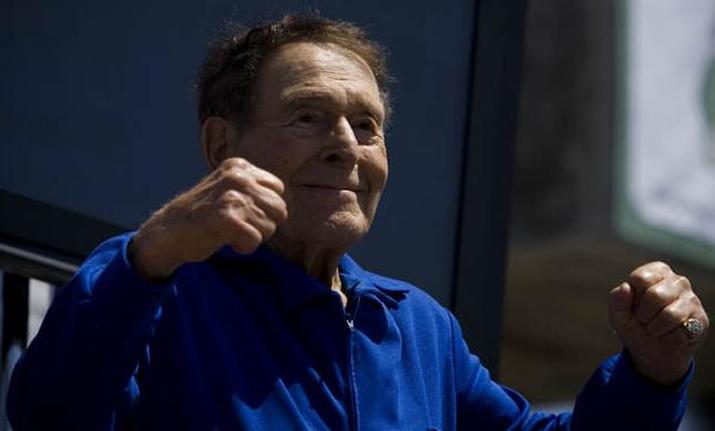 Photograph by Nathan Cremisino
The picture above is of one of my heroes, Dr. Jack LaLanne.  Yep. That’s right.   Although many of you may not know it, LaLanne was a Chiropractic Physician.  Although Arnold himself once said, “that Jack LaLanne’s an animal“, he certainly did not start out that way.   LaLanne was a weak, sickly child until at age 15 when he attended a lecture by a well-known WHOLE FOOD NUTRITIONIST.  He turned his life around by making a series of conscious choices to be successful.  He started eating healthy, got an education, and literally started the health-fitness-exercise industry here in America from scratch.  He died last year at age 96.   LaLanne was the definition of a “healthy” physician.

Although I have my share of pet peeves, few things irk me more than unhealthy doctors.  I am of the opinion that one of the job requirements for being a physician is to live a healthy lifestyle —- to be an example for a sick and dying population — to live the life and walk the talk.  We all have a tendency towards hypocrisy.  “Do as I say, and not as I do” is a favorite message of pastors, parents, policemen, and politicians everywhere.  Unfortunately, it is also the message of far too many physicians.  I realize that most doctors can never be the sort of example that Dr. Jack was, but is it really too much to ask for us to practice what we preach?  A am of the opinion that whether they realize it or not, most people want doctors they can look up to.  Can you trust an unhealthy physician to provide quality healthcare?  We’ll address that question in a moment (my guess is that you already know the answer).

The word doctor means “teacher“.  How in the world can I have any degree of credibility with my patients if I am being a hypocrite or HEALTH PHARISEE?  Plainly stated; I can’t.  Oh sure, I could go about the business of adjusting my patients — but having any real creed with them in regards to truly changing their lives….   Forget about it!   At the very least, an unhealthy doctor has just made his / her job much more difficult.   At worst, unhealthy doctors are actually contributing to the very problems they are supposed to be helping.   Who are these unhealthy doctors I am talking about?  They are not just MD’s, but DO’s, DC’s, DDS’s, DPM’s and even certain Ph.D’s.  They are those who are not living up to the standards they have been entrusted to help foster in others.  I would lump them into three broad categories.

You would think that this issue should be a no-brainer —- something that boils down to nothing more complicated than simple common sense.  But between the fact that common sense is not very common anymore, and someone thought that we needed to spend some more of your hard-earned tax dollars figuring out the obvious, I have been provided with a ready-made Blog Post.  The results of recent scientific studies into this issue suggest that the role unhealthy doctors play in the degradation of America’s health is far too big to ignore —- or to be considered merely a “pet peeve“.  Not surprisingly, we are learning that unhealthy doctors are helping cause America’s epidemic of unhealthiness.  Johns Hopkins University / Medical School and others have recently brought this to the public’s attention.

DOCTORS WHO ARE OVERWEIGHT OR OBESE:
We all know that America is in the grips of an OBESITY EPIDEMIC.  About 70% of our adult population is overweight (children are closing the gap every day), with around one third falling into what is often referred to as “obese”.    Although definitions vary, a BMI (body Mass Index) of 30 or greater is considered to be obese (18.5 to 25 is considered normal) as is being 30% over your ideal weight.  If you are 50% over your ideal weight or 100 lbs overweight, you are, by definition, “Morbidly Obese” (sometimes called “Grossly Obese“).  Bottom line; obesity is a public health crisis that is not only costing millions of lives, but speeding along the process of national bankruptcy.

In a recent Medscape survey, nearly 40% of male doctors reported being overweight, with just over 5% admitting to being obese.   As for female doctors, nearly 30% said they were overweight and 35% of these were obese. These results were almost identical to previous surveys; suggesting that little ground is being gained on this particular issue.  And my guess is that because these results were gleaned via a self-reported survey, the results are not nearly as accurate as if they were reported by an independent third party.  In other words, if you think that all overweight doctors are above fooling themselves just because they are doctors, you do not understand human nature very well.  This is borne out by a recent Gallup poll showing that 13% of physicians are obese, as well as a January 30, 2012 Med City News column where Diana Pogoreic quotes research stating that, “Fifty three percent of physicians in the U.S. are overweight or obese.”

Some of you think I am being harsh or unfair when I say that overweight doctors contribute to the Obesity Epidemic.  I am being neither.  It’s time for doctors to step up and lead from the front!   A recent study co-published by the prestigious Johns Hopkins Bloomberg School of Public Health and the equally prestigious Johns Hopkins University School of Medicine led to some interesting conclusions.   Chiefly, that a doctor’s own body weight determined what sort of recommendations he or she made to their overweight and obese patients.  Doctors were almost half as likely to discuss losing weight with overweight patients if they themselves were overweight (18% -vs- 30%).

Even more intriguing was the fact that 93% of all physicians studied, failed to “diagnose” obesity in their patients if they believed they themselves weighed more than their obese patient.  And when obese doctors did diagnose obesity in their patients, they were much more likely to prescribe weight loss meds (various forms of amphetamines) than to recommend lifestyle changes.  This reflected the fact that while 72% of all doctors thought that being a healthy role model was important in the doctor / patient relationship, only 56% of the overweight or obese doctors thought this way.  The bottom line in this study is that only 37 percent of overweight doctors “strongly believe” that they are competent to as much as merely offer advice about eating and exercise to their overweight patients.   And we have not even addressed the smoking issue, which Forbes Magazine now says costs our country less than obesity.

DOCTORS WHO SMOKE:
According to our government, cigarette smoking is responsible for over 200 billion dollars in health-related economic losses, and over 5 million years of lost life here in America —– each year.  A comprehensive 2007 study of the smoking habits of physicians world-wide, stated that, “some may be surprised to hear that as many as 5% of US doctors smoke“.  Although this is far better than China and certain European countries where as many as 40% of physicians are smokers, it is still unacceptable.   The good thing, however, is that the numbers of smoking physicians has dropped significantly over the past several decades.  And thank God 3 out of 4 physicians no longer recommend Camel’s (HERE) —- now it’s Medical Marijuana.  Oh, and one more thing.  Although I cannot find statistics, it seems that there are probably a fair number of doctors who chew tobacco.  As amazing as it sounds, there are several large physicians groups whose stated position is to actively promote their patients moving from SMOKING to dipping.

DOCTORS WHO FAIL TO EXERCISE:
An Auburn University study from the early 90’s stated that, “Seventy percent of the physicians did not develop exercise prescriptions and fewer than one in four were familiar with the American College of Sports Medicine guidelines related to the development of exercise prescriptions.”  Exercise is another area where there has been a degree of improvement by healthcare professionals.  According to research, they are both doing it more and prescribing it more.

The latest Medscape survey shows that physicians do better than their average patient in this department.  A bit fewer than half of the under-30 doctors exercise at least twice a week.  And believe it or not, this number actually goes up with age.  But just under 10% of the doctors surveyed are not exercising at all.  This is far better than what researchers wrote in the December 2, 2008 of the British Journal of Sports Medicine almost 4 years ago (could ‘self reporting‘ be the culprit here as well?).  In this British study, the government determined that only one in five doctors are getting the recommended 30 minutes of moderate exercise at least five days a week (44% of the general population claims to be meeting this goal, which I am not buying — at least here in the Ozarks).  And although the study looked at British physicians only, the author stated that she believed results in America would not be any better. (The best form of exercise is THIS)

A UNIVERSAL PROBLEM:
Although other country’s physicians are far unhealthier in certain categories (smoking for instance), America’s doctors are falling far short of the goal of being role models for health —- particularly when it comes to weight.  Believe me; this blog post is not meant to pick on Medical Doctors only.  Just look around you the next time you enter a medical facility.  There are lots of unhealthy nurses as well.  It’s always sad to see health professionals congregating around the side entrances of the hospital to take their smoke breaks, or physicians eating donuts and pizza on a regular basis.  And when I see these sorts of things going on inside of my own profession, I am doubly troubled.  No one should take the calling to model health to their patients more seriously than those of us within the chiropractic profession!

A UNIVERSAL SOLUTION:
Doctors following the guidelines laid out below would certainly not “cure” Americans of all their physical woes.  However, these guidelines would undoubtedly make them much more effective role models.  What are these guidelines and where did they come from?  Recently, two Johns Hopkins medical students started a grassroots program designed to help student doctors and nurses, as well as those already in practice be healthy role models to their patients.  Medical practitioners who are so inclined, sign something called The Patient Promise.  The stated goal of this program is, “To lead by example and practice healthy lifestyle behaviors comparable to those I would ask of my patient.”  It is only fair.  As a student of history, I can assure you that most of history’s truly great military leaders were men who would never ask those under their command to do something that they would not do themselves.  The Patient Promise is a step in the right direction.  The checklist of The Patient Promise, includes the following worthy goals — goals that all physicians could help their patients achieve by living by.  Sure; some of these could be taken to the extreme in our overly ‘politically correct’ society.  But at face value, the list looks solid.