the all-encompassing theory of modern disease

THE ALL-ENCOMPASSING THEORY OF MODERN DISEASE 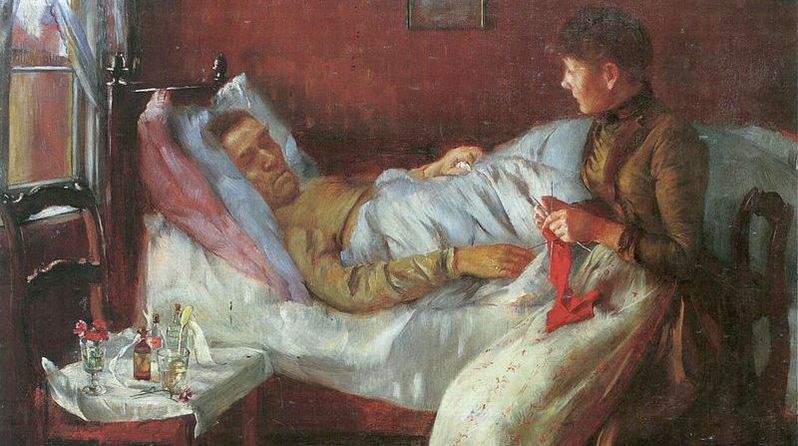 This is a “souped up” version of an email that I sent to a friend the other day who was asking about Psoriasis — an Autoimmune Disease.  He was interested in finding out more information about the relationship between Gluten & Autoimmunity, and going ‘Gluten Free’.  So what did I do?  I expanded his email and turned it into a Blog Post.

Some of this information is way oversimplified.  Some of it is probably not quite technically correct.  And you should be aware that the various steps in this cycle can be in a different order than I’ve shown, can overlap each other, or can be skipped altogether.  Regardless, this model is accurate enough (and hopefully understandable enough) to get you in the ballpark as far as recognizing the roots of chronic illness.

Just remember that in the same way that there is no “Universal Cure” for all physical ailments, neither is there a single cause of these ailments.  However, this is great information that will give you something to think about if you or a loved one are struggling with chronic health problems. Also realize that I refer to the theory of modern disease because diseases of days gone by were very different. All you have to do is compare causes of death today to yesteryear to realize this.

INFLAMMATION is the driving force behind almost every single disease processes and chronic health problem — even many of those that people like to pawn off on “GENETICS“.  Contrary to popular belief, inflammation is not swelling, but is the collective name given to a group of immune system chemicals (see first link), which always results in FIBROSIS (the medical word for “Scar Tissue”), which happens to be the #1 leading cause of death in the United States (HERE).

Although these chemicals are good (even vital) in small amounts; in large amounts they promote a veritable Pandora’s Box of health problems, and can be the result of many different things (GLUTEN, MOLD, YEAST, PARASITES, HEAVY METALS, THYROID ISSUES, a wide array of ENDOCRINE PROBLEMS, SUGAR), but at least in the Westernized world, is almost always tied to poor diet choices in some form or fashion.   Just be aware that SYSTEMIC INFLAMMATION (large amounts of Inflammatory chemicals coursing through your blood stream) eventually leads to……….

Let’s start by saying that unless you are using one of those special hoses to water your garden, no matter where they are found, leaks suck.  Leaky body parts are no different.  Just realize that I am not talking about leaky bathroom functions here, but instead talking about the way that various organs and tissues become hyper-permeable to various sorts of chemicals or compounds.

Although the most famous of these is called LEAKY GUT SYNDROME, these “LEAKIES” can be found almost anywhere (brain, lung, spinal cord, nerves, etc, etc), which is backed by peer review (see link).  If you hear a doctor saying he / she does not believe in LGS or similar, run far and run fast (typing “Intestinal Permeability” into PubMed returned almost 4,000 studies).

I would guess that at least half the American population —- maybe more, have some degree of this problem, and occurs when the Small Intestine’s “tight junctions” — the gaps between individual cells —- become loose.  In healthy individuals, these tight junctions are just big enough to allow fully digested food particles to get through so they can be absorbed into the blood stream.

As Inflammation increases, it destroys the compounds that hold the cells tightly together, allowing the tight junctions between the cells to become looser / larger.  This then allows the Small Intestine to become increasingly permeable (leaky) to substances that should never be allowed to get through.

Just remember that this is not only happening in the Gut.  Once this junk makes it into the blood stream where your body will invariably recognize them as foreign, it will begin to make antibodies against them. These “foreign invaders” include everything from parasites, to partially-digested or undigested food fragments, to bacteria, to viruses, to yeast, to heavy metals, to chemical toxicity, to medications, etc, etc, etc.   The process of getting sick causes even more Inflammation.  Do you see the vicious cycle starting to churn?

Oh, and just remember this can happen in the lungs, as well as the BBB (Blood Brain Barrier), not to mention the similar layer of epithelium that protects the nerves and spinal cord.  There is, however, another aspect of GUT HEALTH.  A flip side of the coin if you will….

When we get sick, doctors to prescribe Antibiotics.  ANTIBIOTIC use, overuse, and abuse causes a disruption of the Gut’s normal Flora.  This imbalance of bad bacteria to good bacteria in the Gut and elsewhere is called DYSBIOSIS.   Although Dysbiosis is caused by Antibiotics, it is fed by SUGAR & STARCHY / PROCESSED FOODS.  Thus, Blood Sugar is a an absolutely critical issue for virtually all Americans — even if they do not (yet) have Diabetes (HERE).

Add this to the fact that we have known since the late 1990’s that 80% of your entire Immune System is found in the Gut (HERE) —- much of it in the form of these ‘Good Bacteria’ — and you have recipe for disaster.   The potential for a perfect storm that will show up in the form of numerous chronic illnesses and health problems.   But I am getting ahead of myself.  The entity that most commonly takes everything to the next level is………..

Ten years ago, hardly anyone had heard of GLUTEN.  Now, practically everyone has heard of Gluten, and just about every grocery store has an entire section devoted to “Gluten Free” foods (most of which I AM NOT A FAN OF) — instead of eating these foods, go PALEO).  There is a reason that this is happening.  Although science has not figured out the exact mechanisms (HERE are several hypothesis), the bottom line is that it is now common (even, ‘the norm‘) for people’s Immune Systems to recognize Gluten (or GLUTEN CROSS-REACTORS) as foreign invaders, begin to attack them, and to make antibodies against them.

It is absolutely critical to realize that despite most people thinking of Gluten Sensitivity in terms of “Gut Symptoms” (bloating, gas, diarrhea, etc), the majority of the symptoms of Gluten Sensitivitiy will manifest as NEUROLOGICAL problems — many of which show few (or even no) overt digestive / GUT SYMPTOMS.  One of the best examples of this phenomenon is the outlandish number of Americans dealing with THYROID PROBLEMS. As you can see from THIS POST, this part of the process is a well known mechanism for developing………

This is where the whole model starts getting nutty.  As crazy as it sounds, there are many medical experts who believe that things like PARKINSON’S DISEASE and other neurological problems are the neurological / autoimmune manifestations of Gluten Sensitivity. I recently attended a seminar where the instructor, a distinguished Functional Neurologist trained by both Dr. Carrick and Dr. Kharrazian (Dr. Steven Noseworthy) stated that (I am loosely quoting him here)…

In other words, thanks to inflammation and a FREAKED OUT NEURO-IMMUNE SYSTEM, our bodies start picking fights against themselves.  Dr. Noseworthy used out-takes from dozens of scientific papers from the most prestigious biomedical journals on the planet to prove his point.  To be honest with you, it was shocking seeing so much proof in black and white.   And although this idea is certainly not embraced by practicing physicians (yet), it is currently being touted by some of the world’s most brilliant doctors —- particularly the experts in FUNCTIONAL MEDICINE.

Autoimmunity leaves people susceptible to a whole host of —- you guessed it —– AUTOIMMUNE DISEASES —- diseases that tend to travel in packs like wolves.  In other words, if you have Psoriasis, you are ‘Autoimmune’ and will likely end up with many more of the diseases listed in the previous link if you do not get the situation under control.

Fixing a Leaky Gut will take anywhere from 1-2 months (in some cases longer) and require real effort on your part as far as what foods you eat and supplements you take.  HERE is an example of someone who followed our advice to the letter and did it with a condition widely considered “incurable”.  HERE is a person who successfully addressed five autoimmune diseases and lost 100 lbs in the process, all in about seven months.

Robert Thomson I want you to think of sickness, ill health, and disease in a new way.  Imagine that the process listed in the five steps above as a huge volcano —- a churning mass of hot lava that you cannot see because it is underground.  Your body has the ability to squelch this growing mass of lava if you do the right things.  Or the mass can be allowed to churn, bubble, and boil, until it blows its top, spewing ash and rock, and overflowing lava all over the place.

Just remember that the spewing rock and overflow of molten lava is merely the symptom (the visible manifestation) of what is going on below the surface.  If you do not figure out a way to dry up the source of this volcano, it will continue to erupt, causing a diverse array of seemingly unrelated problems (fires, tsunamis, earthquakes, etc).

If you want to begin addressing some of the root causes of your health problems, you can start by reading HOW TO SOLVE JUST ABOUT ANY HEALTH ISSUE.  The great thing is that no matter what is wrong with you, there are universal steps that must be taken by everyone in order to dry up their volcano and get well.   Fortunately, some of you will be able to do much of this on your own (WE EVEN ADMIT THIS).   Be aware, however, that depending on the severity of your particular situation, you may need to see a physician who will help you step out of the box.

If you are honest about it, you have to realize that the new paradigms of health and disease have bypassed the average doctor’s office, leaving them in the dust. The problem is that most of them are so far behind the curve that they still think they are in the lead. Most are still using the “Better Living through Pharmacology” model (HERE) because, well, that’s what pays the bills.

The problem is, this model is not only not helping most of our population’s chronically sick people get well (HERE), it is often times a significant contributing factor to the development / propagation of Leaky Gut / Leaky Brain Syndrome.  But hey; it makes a heck of a lot of money for a heck of a lot of people.  Drugs might mop up the inflammation, but they never turn off the faucet where it’s pouring out of (HERE).

There is not another profession on the planet with a wider gap between the scientific research community and the professionals in the field (HERE).  These two groups within medicine are often 180 degrees opposite of each other.  This blog post should more than alert you to this fact.  Just more proof of the myth of EVIDENCE BASED MEDICINE.

What does it all mean to you?  Only that if you care about your health and the health of your family, you had better do some simple research into what it takes to get healthy and stay healthy!   I realize that it’s a tough revelation to swallow, but the truth is, it’s all up to you, and I’ve given you a starting point.  Nope, it’s not a “cure,” but a place to start making a plan to get better (HERE). And if you appreciate our site, be sure to like, share or follow on FACEBOOK.