what’s in a chicken nugget? 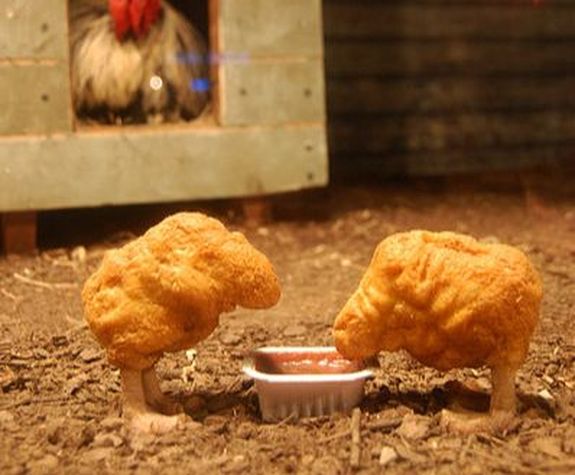 Image by Ludovic Bertron
Who could forget the old TV ad from above?  Hilarious wasn’t it?  The problem is, in all reality, it hits just a bit too close to home.  You’ve all heard of the term “Mystery Meats“?  Chicken Nuggets take this concept to a whole new dimension.

Dr. Richard D. DeShazo and his team of researchers from the University of Mississippi Medical Center in Jackson, recently went to two fast food restaurants who are well known for their chicken nuggets (although they did not say which eateries these were, we can probably McGuess one of them).  They took the nuggets back to their lab, took them apart, stained them, and then looked at them under a microscope.  Their conclusions were published in this month’s issue of the American Journal of Medicine.

Only 40-50% of the nuggets were made up of meat (muscle tissue).  The other 50 to 60% was made up of yummy things like fat, blood vessels, cartilage, nerves, ground up bones, and even tissues that line the skin and internal organs.  Although these products do not come to the fast food joint fully cooked, in the grocery store, they typically do.  This means that on top of everything else, they are being fried in TRANS FATS (partially hydrogenated oils), as well as being supplied with a heavy dose of artificial flavors and EXCITOTOXINS / MSG in order to fool our taste buds and brains.  They are then put into packages to get your children’s attention and sold as something wholesome —- chicken.

Unfortunately, we cannot leave this subject without first discussing Poultry Paste — better known as Pink Slime.  As crazy as it sounds, the process used to make these nuggets remains almost exactly as it was 25 years ago —- as described in the quote from the top of the page.

Once the ‘parts’ are processed off the chicken into one large mass, it is blended together into huge vats and eventually becomes something called “Pink Slime”.  This gooey mess (seen below) can then be shaped, formed, flavored, and breaded in any way the food manufacturer wishes.  By the way; hot dogs, lunch meats such as bologna, and all sorts of other meat products are made the same way — only they use parts from a wider array of animals.  Hey; it’s true.  Parts really is parts!  Rather than me talking about it, just take a look at the first two minutes of this video.