AN ASPIRIN A DAY
MAY LEAD YOU TO AN EARLY GRAVE 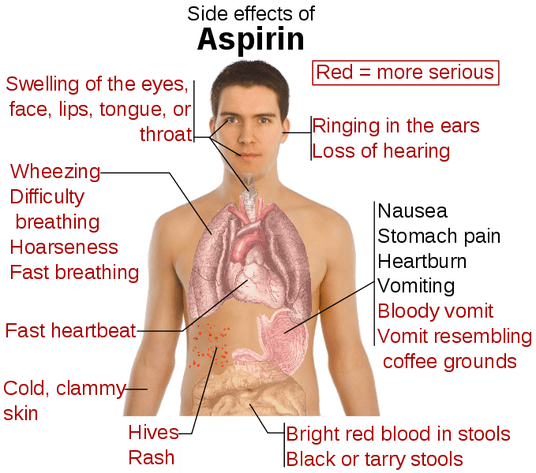 Inflammation is a group of naturally occurring immune system chemicals, which, when driven to excessive levels, is the root cause of numerous illnesses. Just a few of the diseases that are being touted as being “inflammatory” includes heart disease, diabetes, obesity, cancer, autoimmunity, etc —- and that’s just for starters. INFLAMMATION is literally the number one killer in America today.

Randomised Trial of Intravenous Streptokinase, Oral Aspirin, Both, or Neither Among 17,187 Cases of Suspected Acute Myocardial Infarction [Heart Attack]) suggested that high risk patients taking daily aspirin had fewer heart attacks, drug companies have have put on a full court press for their marketing departments to convince the public that daily aspirin therapy is great for everyone. And now the studies are coming in touting daily aspirin as a preventative against CANCER. Who is a person to believe?  As always; BE LEERY of believing anyone with ties to Big Pharma.

The twin ingredients of fear and half-truths have made aspirin (right along with its red headed stepchild NSAIDS) a favorite of the general public. Although Americans consume mass quantities of PRESCRIPTION PAIN PILLS, they take between 50-100 million tablets of Aspirin each and every day, largely believing them to be completely safe.  This despite evidence showing that……

Now, new research from a January issue of Archives of Internal Medicine, says that the benefits of daily aspirin have been “overstated” for most people with no history of cardiovascular problems. London’s St. George University gave 100,000 people with no cardiac history either a placebo or daily aspirin for an average of six years, and then assessed whether it had any impact on the risk of death from cancer or heart-related diseases among people considered at risk of cardiovascular disease.

Although cardiovascular “events” decreased by 10%, there was no reduction in fatal heart attacks, fatal strokes, and non-fatal strokes. Aspirin’s perceived 10% benefit was almost entirely offset by a 30% increase in risk of internal bleeding (gulp!). In response to these results, the study’s lead author, Dr. Rao Seshasai, stated that, “the benefits of aspirin in those individuals not known to have these conditions are far more modest than previously believed and, in fact, aspirin treatment may potentially result in considerable harm due to major bleeding…. Aspirin prophylaxis [as a preventative measure] in people without prior CVD does not lead to reductions in either cardiovascular death or cancer mortality”

In agreement with these recommendations was the taxpayer-funded U.S. Preventive Services Task Force, whose chair, Dr. Michael LeFevre stated, “A blanket recommendation that everybody should take an aspirin is not a good idea. The drug is probably overused by healthy people.” Last May’s issue of The Lancet published similar conclusions by a world wide group of scientists who agreed with the recommendations of the U.S Task Force. “You really have to have a clear margin of benefit over hazard before you should be treating healthy people,” stated the study’s coordinator, Oxford University’s Dr. Colin Baigent.

McMaster University’s Dr. Michael Buchanan further concluded that an astounding 40 percent of his test subjects actually had increased clotting while on aspirin than without it, making them more vulnerable to both heart attacks and strokes. This data was supported by two studies done by European neurologist, Dr. K.H. Grotemeyer’s team, who found back in 1993 that, in a group of 180 stroke patients who were given aspirin to prevent a recurrence of strokes, heart attacks, and other cardiovascular-related deaths, all seemed to respond well initially. However, in one third of these patients, blood clotting activity actually increased after 12 hours.

Who should you believe when it comes to the benefits of aspirin? Only trust yourself. The internet provides an easy portal for people to do their own research on sites with databases to massive amounts of peer-reviewed scientific research (PubMed is a great example).