THE SCIENCE BEHIND STAYING FAT….
IS IT REALLY OK? 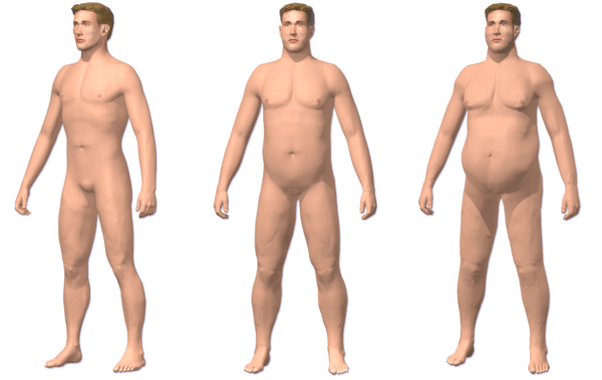 BruceBlaus
“There are many active efforts to combat obesity, but our culture at large is in the business of propagating it for profit, from big food to big media to big pharma. It’s that simple. We do much more, across the expanse of our culture, to foster obesity than to defend against it.”  Dr. David Katz of Yale University’s Prevention Research Center; lead author of today’s study
The Daily Beast recently ran an article by Patrick Mustain titled Why Science Says it’s OK to Stay Fat.  There have lately been any number of similar, all touting the same thing — that it is possible to be BOTH FAT AND FIT and FAT AND HAPPY simultaneously.  But is this really true, and does it make any sort of logical sense?

This plethora of articles is the result of a study (Anthropometric Reference Data For Children and Adults: United States) published earlier this summer by our own CDC, whose slogan at the top of the page reads, “Safer, Healthier, People“.   It’s one thing for the government to collect statistics on health. However, I would contend that a government entity touting the idea it has the power to make people healthier is largely deluded.

For instance, this study revealed that, “the national overweight and obesity trends among children were instrumental in developing the Let’s Move Campaign; a comprehensive initiative launched by the First Lady of the United States.”  Instrumental?  Certainly.  But that’s not the issue.  How’s Michelle’s campaign been working out?  I showed you back in March that even if we weren’t spending tens of millions of tax dollars on this and other similar programs (i.e. they were free), they would still be some of the most worthless health / fitness tools out there (HERE).  Below is proof of this from the CDC itself (SIDE NOTE: Honestly, the stats below are far worse than they appear simply because the “current” government numbers used for this study were nearly a decade old — 2007-2010).

and here’s the kicker folks….

In Mustain’s article, he argues that despite any number of studies showing how OBESE AND UNHEALTHY we have become as a nation (he lists several of the inflammatory diseases found on my  link above), we don’t really need to try to solve this problem by exercising or losing weight.  Want proof? (cherry-picked)

“The world is getting heavier. But you don’t need to lose weight.  Despite what we are told almost everywhere we go, health does not start with weight, and if you are heavy, it does not mean there is something wrong with you.  This is another problem with a purely “make better choices” approach to weight management. It simply isn’t working, and there’s no evidence that it will work.  Should you try to lose weight? Maybe, maybe not. Should you try to figure out how to fit healthier habits into your daily life in ways that you can tolerate and enjoy? Absolutely. Is there something wrong with you if you don’t eat better and get more physical activity? No. You’re acting like any normal primate, though you’ll probably be better off if you do make those changes.“

Of course Mustain blames our national obesity phenomenon on the usual suspects — EVOLUTION, POVERTY, and ﻿SOCIAL INEQUALITY﻿, among others.   And although he does not delve deeply into it in this piece, I could almost guarantee you that his core belief in this matter is that bigger government can save us from ourselves.  The problem is, I’ve already shown you that it can’t.   Our government’s recent ‘wars’ (war on drugs, war on poverty & disease, war on terror, and now the war on obesity) have, for any number of reasons, proven largely futile.  Solving this problem will never start with government (HERE), it starts at home —- with parents being parents (HERE or HERE). Big Government had their chance, and has shown us time and time again that it is not capable of being a surrogate parent to it’s citizens, whether children or adults.

Here’s the truth of the matter.  We have become a nation of JUNK FOOD JUNKIES, largely rendering “SUSTAINABLE” healthcare a pipe dream (or HERE).  Not only does the empirical evidence prove that America’s adults are fatter than ever (HERE), our children are likewise obese — even though many (maybe most) have been told they aren’t (HERE).  Furthermore, an additional 7-10% of the population (a large percent being children or young people) are functionally “obese” (their blood work is abnormal) even though the scale says they are of normal weight (HERE).  On top of everything else, we have created an epidemic of a particularly vicious type of obesity here in America — one that is not only particularly dangerous, but deadly as well (HERE).  And while it undoubtedly sounds harsh, many of you out there are directly responsible for making your children fat (HERE), while failing to even recognize there’s a problem (HERE).

Contrary to what Mustain wants you to believe, “Science” is not telling us that it’s OK to be fat or stay that way.  In fact, it is saying (screaming might be a better word) just the opposite.  Talk to any doctor or nurse; our current healthcare system (both private and public) is being completely overwhelmed, and a significant percentage of it has to do with our nation’s collective weight.  In fact, I showed you JUST THE OTHER DAY that as bad as the health of this generation is, the health of the generation(s) coming behind us is almost unbelievable.

Health starts with simple concepts.  Two of the most common are the healthy diet and a proper amount of physical activity / exertion (the former being far more important than the later).  No matter how difficult you think it might be to change these two features of your life, not only can it be done, it can be done is such manner as to provide many of you with huge results fast (HERE is an example).   It’s like anything, the longer you do it, the easier and more natural it gets.  Fortunately for you, the generic template for solving CHRONIC PAIN, chronic illness (INFLAMMATORY ILLNESSES, AUTOIMMUNE DISEASES, and MUPS), as well as obesity are very similar (HERE).

Dr. Schierling is licensed chiropractor and world-renowned chronic pain specialist. Dr. Schierling specializes in a holistic approach to helping end his patients’ chronic pain that includes Scar Tissue Remodeling Therapy.
All Posts »
PrevPreviouswhy don’t most chiropractors / doctors get the kind of results they were getting seventy years ago?
Nextyour gut health determines your immune system functionNext