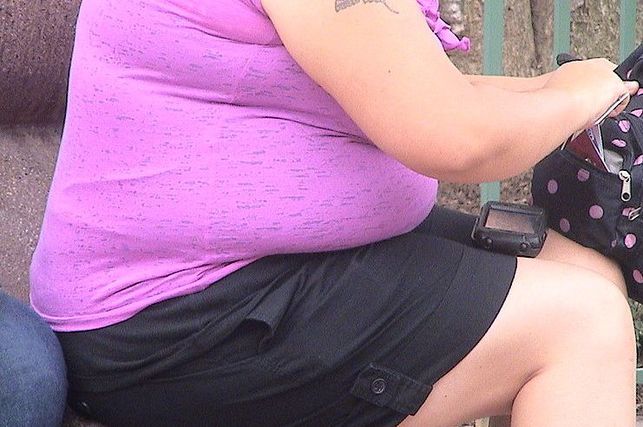 Photo by Mallinaltzin
Fat men tend to carry their excess weight around their waists (the proverbial “spare tire“), while women typically carry extra weight around their hips.  Up until a few decades ago, “Central Obesity” was a problem which, while relatively common in men, was relatively rare in women.  Unfortunately this is no longer the case, as our entire population has gotten progressively heavier.  We all know the consequences.  Both men and women with central obesity (BELLY FAT) have been shown to be at greater risk for a wide array of health problems including Heart Disease, DIABETES, FIBROMYALGIA / ADRENAL FATIGUE, as well as many others (HERE).  You can now add another health-related problem to the list —– this one specifically geared at women with large bellies.  Osteoporosis.

A brand new study done by Columbia University’s Dr. Adi Cohen and published in the Journal of Clinical Endocrinology and Metabolism showed that pre-menopausal women (ages 18 to 48) with the most belly fat had the greatest degree of osteoporotic changes.  In fact, women with the greatest amounts of belly fat had almost 1/3 less bone volume (the bones were more porous — see the photo above) as well as much greater levels (almost double) of brittleness / stiffness, when compared with women with the least amount of belly fat.  This is particularly alarming because of the way science has always viewed the relationship between Osteoporosis and OBESITY.

The women that have always been deemed to be the most “at risk” for Osteoporosis were the tiniest and most sedentary.  On top of this, Obesity was actually thought of as a preventer of Osteoporosis because carrying extra weight was considered to be “weight bearing” (WEIGHT-BEARING EXERCISE is the number one way to reverse or stop Osteoporosis — HERE).  No longer.  If you are an overweight female and your fat is piling up around your belly, it is imperative that you figure out what you’ll have to do to get rid of it.  My website is a great place to start (HERE).

And believe it or not, Osteoporosis is beginning to look like an INFLAMMATORY DISEASE (the topic of tomorrow’s blog post).  Many scientists now think that the adverse effects of obesity on bone growth & development are the result of production of inflammatory chemicals by one’s visceral adipose tissue (belly fat).  This is certainly interesting, considering that Obesity itself is considered to be one of the more common of the hundreds of health problems that are the direct result of Inflammation.  More information on Osteoporosis can be found HERE.