breast cancer screenings — not all they’re cracked up to be. 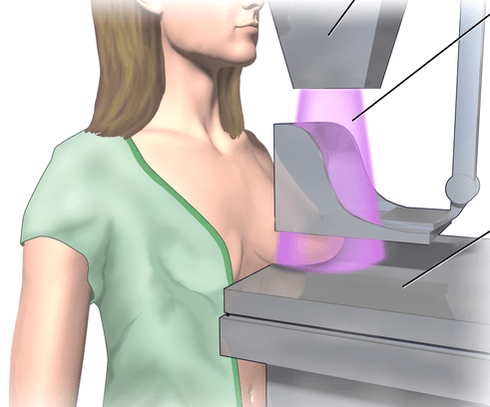 BruceBlaus
According to a brand new Norwegian medical study, Routine Mammograms cause, “substantial amount of overdiagnosis” of nonfatal breast cancer (a common problem with ALL CANCERS).  According to Mette Kalager and colleagues of Harvard School of Public Health, the screenings found large numbers of cancers that would not have become clinically significant during the woman’s lifetime.  Their research was published in the April 3 issue of Annals of Internal Medicine.

Mammograms increase the incidence of diagnosed cancer in the following two ways.

The first scenario is what Mammography is all about — it’s what we think of when we think of Mammograms and “early diagnosis“.  However, in the second scenario is problematic because the researchers stated that, “the woman would be diagnosed and treated with no possible survival benefit.”  This is not a new problem.  It is the very reason that routine PSA tests for Prostate Cancer have been abandoned (HERE and HERE).  But how big a problem is this phenomenon in the area of Breast Cancer?  The researchers showed previous studies showed that over diagnosis (the second bullet above) that were as high as 54% (gulp).

Seven years ago, Norwegian women ages 50 to 69, were allowed to have a mammogram every other year using public health data from their government-run health system, Kalager and colleagues and his team looked at the statistics.  They determined that Norway’s over-diagnosis rate was a whopping one in four (25%).  After looking at the data in a different manner, they still estimated the over-diagonisis to be as high as 20%.

This led experts Drs. Joann Elmore, MD, of the University of Washington, and Suzanne Fletcher, MD, of Harvard Medical School to publish their own research in the very same journal.  These two well-respected breast cancer experts wrote in the Annals of Internal Medicine that, “Evaluating strategies for observing change in some lesions over time instead of recommending an immediate biopsy has been suggested.  Unless serious efforts are made to reduce the frequency of overdiagnosis, the problem will probably increase.“

As a side note to this issue, our own State Department’s website on Norwegian travel states that, “Healthcare in Norway is very expensive and healthcare providers sometimes require payment at time of service.”  Norway’s tax rate is approaching 50% of their GDP.   They are one of the many nations that the AHA (Obamacare) is being modeled after.

WHAT ABOUT SELF BREAST EXAMS?

We’ve all heard that Self Breast Exams are a wonderful way to prevent cancer by detecting it early.  But is this really true?  What does the research say about this subject?  Despite the fact that everyone (the government, healthcare agencies, doctors, etc) continues to push for Self Breast Exams, there is a great deal of evidence showing that they do not work to detect cancer early.  For instance, one of these was a paper (meta-analysis) published in a 2001 edition of the Canadian Medical Association Journal that was based on the results of 8 recent scientific studies.

Let me say that none of these people are telling women not to do self examinations.  They are simply telling them that self examinations do not prevent breast cancer like they have been led to believe.  Rather than belabor this issue, be sure to read the position paper by the National Breast Cancer Coalition (HERE).  Or you could read all my posts on BREAST CANCER.