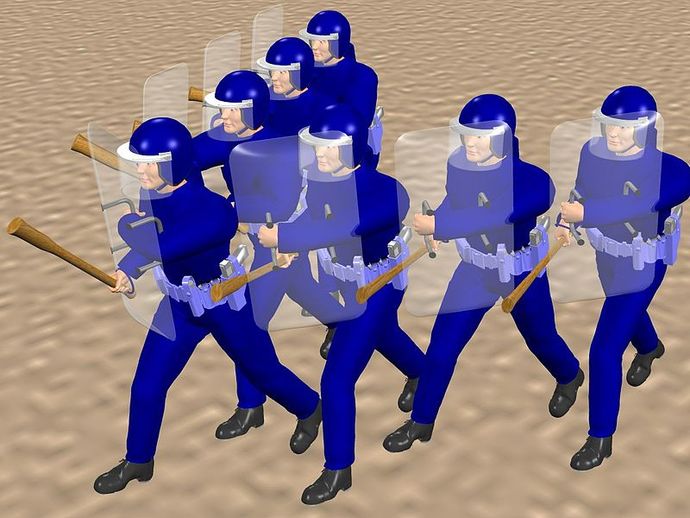 Anthony Appleyard
“Basic problems of representation are driving growing concerns about relying on published research to reflect the truth.  The end result is that the healthcare, biomedical research, and policy communities may end up drawing scientifically invalid conclusions based on only those parts of the evidence base they can see.  Recent studies have also shown that even when disclosure of study findings is mandated by law, results often remain invisible.”  From the BMJ article discussed below
RIAT stands for “Restoring Invisible and Abandoned Trials”.  Once you understand what Invisible & Abandoned studies are (HERE), you will agree that the companies in charge of purveying these sorts of practices on the public should be read the riot act (then fined, caned, and sent to Papillon’s infamous ‘Devil’s Island’).  Let me explain to you why “Invisible & Abandoned” studies are so deviously filthy.

As you know, when it comes to BIG PHARMA, there are billions and billions of dollars at stake, both through the private sector (insurance Companies and out-of-pocket) and public sector (Medicare, Medicaid, etc).  We already know that the pharmaceutical industry is frequently (routinely) charged with UNDER-REPORTING side-effects, OVER-TESTING, DATA FUDGING, “PRESS RELEASES” disguised as research, FINANCIAL CONFLICT-OF-INTEREST, HYPE, and OUTRIGHT FRAUD, while trying to either get their drugs approved by the FDA, or trying to gain market share — and these are just for starters.  Another common way that research becomes untrustworthy is via Invisible and Abandoned studies.

These are the studies that are buried due to the fact that the results don’t turn out the way the drug companies wanted.  In other words, one of the numerous dirty little secrets inside the pharmaceutical industry is that huge numbers of studies on any particular topic, never see the light of day if the manufacturers don’t want them to.  The perfect example has to do with Anti-depression Drugs (HERE).  I will warn you that clicking on this link will both scare you and infuriate you if you or someone you love has been taking medication for DEPRESSION — particularly if they are not an adult.   Where does this lead us?  To the RIAT Act.

The RIAT Act, as it is so lovingly referred to, is not some sort of official legislation, rule, or law.  It was an idea that was initiated by seven members of the scientific medical community, essentially calling out cheaters, and published in the June 28, 2013 issue of BMJ (Restoring Invisible and Abandoned Trials: A Call for People to Publish the Findings).  In essence, this was David calling out Goliath.  Let me give you an idea of how big this problem really is.  Just remember that what you are about to read is only the teeniest tiny tip of a very big iceberg — obtained mostly through “disclosure” in lawsuits against drug manufacturers.

“We have access to around 178,000 pages of previously confidential company research documents. For drugs such as paroxetine, quetiapine, and gabapentin, litigation over illegal off-label marketing put thousands of pages of trial reports in the public domain. Other trial reports, such as for oseltamivir and clopidogrel, were obtained through new freedom of information policies at the European Medicines Agency (EMA) that have revolutionised the public’s ability to access trial data.  The documents are a substantial resource of information about trials. We expect that other independent groups will also have access to many additional trial reports.

The documents we have obtained include trial reports for studies that remain unpublished years after completion (such as Roche’s study M76001, the largest treatment trial of oseltamivir, and Pfizer’s study A945-1008, the largest trial of gabapentin for painful diabetic neuropathy). We also have thousands of pages of clinical study reports associated with trials that have been published in scientific journals but shown to contain inaccuracies, such as Roche’s oseltamivir study WV15671, GlaxoSmithKline’s paroxetine study 329, and Pfizer’s gabapentin study 945-291.”

We should not be surprised that PFIZER & GSK are at the top of this list.   In fact, the drug we are going to talk about today is GSK’s Paroxetine, otherwise known as the anti-depressant Paxil (Aropax, Brisdelle, Deroxat, Pexeva, Paxtine, Paraxyl, Sereupin and Seroxat).   Firstly, I have tons of information on my site about dealing with underlying causes of Depression naturally (HERE).   Secondly, the information in the highlighted section above is not new.  I wrote about this specific problem with antidepressants (Invisible and Abandoned) almost two years ago (HERE).  What is starting to happen is that people are redoing these studies or recalculating their conclusions  — the latest being Paxil.

Paxil has been around since just after I got to Mountain View — nearly 25 years ago.  A popular online encyclopedia states that, “It shares the common side effects and contraindications of other SSRIs, with higher rates of nausea, sleepiness, sexual side effects, and weight gain. Discontinuing paroxetine is associated with a high risk of withdrawal syndrome.  Paroxetine may be associated with a slightly increased risk of birth defects.”   The problem is that we all know that adverse reactions to drugs are, at best, reported maybe 10% of the time (HERE).

Between the years 1994 and 1998, GSK, in a study known as “329” (see the earlier highlighted quote) looked at the results of Paxil on 275 depressed teens as compared to a second antidepressant drug (Imipramine) and a placebo.  When the study was originally published back in 2001, you would have thought that Paroxetine was God’s gift to teens with Major Depression — at least according to the manufacturers.

Earlier this month, the same journal that originally published RIAT (British Medical Journal) let fly with a study of their own Restoring Study 329: Efficacy and Harms of Paroxetine and Imipramine in Treatment of Major Depression in Adolescence.  Listen to these conclusions of the study where no new research was done; they simply looked at the results in an unbiased fashion.

“On 14 June 2013, the RIAT researchers asked GSK whether it had any intention to restore any of the trials it sponsored, including Study 329. GSK did not signal any intent to publish a corrected version of any of its trials. In later correspondence, GSK stated that the study by Keller and colleagues “accurately reflects the honestly-held views of the clinical investigator authors” and that GSK did “not agree that the article is false, fraudulent or misleading.”

The efficacy of paroxetine and imipramine was not statistically or clinically significantly different from placebo for any prespecified primary or secondary efficacy outcome. There were clinically significant increases in harms, including suicidal ideation and behaviour and other serious adverse events in the paroxetine group and cardiovascular problems in the imipramine group. The reanalysis of Study 329 illustrates the necessity of making primary trial data and protocols available to increase the rigour of the evidence base.”

Look folks; I have been showing you for years that EVIDENCE-BASED MEDICINE is frequently nothing more than Orwellian double-speak — a politically-correct charade — the true definition of a “pipe dream” — something that should be looked at both warily and critically.  Back in 2012 GSK was fined a whopping Three Billion dollars for this and other similar fiascoes with their drugs (HERE).  They did not even blink.

When the fine was announced, GSK held a press conference — and afterwards, their stock actually went up.  They had already put the money for the fine aside in cash, and stated that it would not affect earnings.  In other words, a $3,000,000,000 fine was nothing more than the price of doing business.  And the clincher is that the drug was never taken off the market — it is still around today, making money and killing children.  That’s right; killing children.  If you really want a taste of how disgusting this whole sordid business has really been, read David Dobbs’ recent article from The Atlantic; The Human Cost of a Misleading Drug-Safety Study (HERE).

Dr. Schierling is licensed chiropractor and world-renowned for intervention with persistent chronic pain. Dr. Schierling focuses on a holistic approach to helping end his patients’ chronic pain that includes Scar Tissue Remodeling Therapy.
All Posts »
PrevPreviousmore on our government’s war on dietary fat
Nexttendinitis -vs- tendinosis, fascial adhesions, and the relationship to icd-10Next