tendinitis -vs- tendinosis, fascial adhesions, and the relationship to icd-10

TENDINITIS OR TENDINOSIS?
IT DOESN’T MATTER WHEN IT COMES TO ICD-10 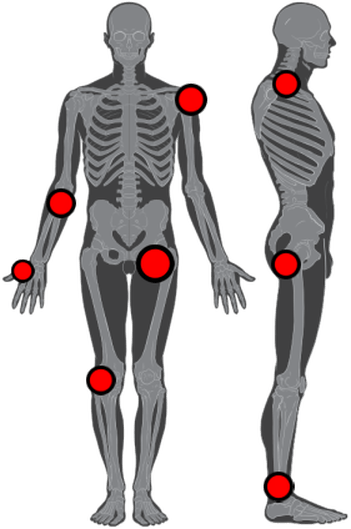 Patrick J. Lynch; illustrator; C. Carl Jaffe; MD; cardiologist
“Confusion between Tendonitis versus Tendinosis:  Tendonitis is a very common, but misleading term. Corticosteroids are drugs that reduce inflammation. They are typically injected into tendinosis along with a small amount of the numbing drug lidocaine.  By definition, anything that ends in “itis” means “inflammation of.”  Research shows that tendons are weaker following corticosteroid injections. Tendinitis is still a very common diagnosis, though research increasingly documents that what is thought to be tendinitis is usually tendinosis.”   From Wikipedia’s listing for Tendinitis

“Tendinosis, is damage to a tendon at a cellular level (the suffix “osis” implies a pathology of chronic degeneration without inflammation).  It is thought to be caused by microtears in the connective tissue in and around the tendon, leading to an increase in tendon repair cells. This may lead to reduced tensile strength, thus increasing the chance of tendon rupture. Tendinosis is often misdiagnosed as tendinitis due to the limited understanding of tendinopathies by the medical community. The term tendinitis should be reserved for tendon injuries that involve larger-scale acute injuries accompanied by inflammation.”  From Wikipedia’s listing for Tendinosis

I just finished putting a bunch of custom diagnoses into my tablet computer for the switch from ICD-9 to ICD-10 that occurs today.  We went from 13,000 potential diagnosis to nearly 70,000.  Although the government has any number of reasons for this switch, some definitely more sinister than others, one that we have heard repeatedly is that it gives those treating patients the ability to be extremely specific with the diagnostic codes that describe what is wrong.

For instance, there is a code (V97.29) for your local airport’s luggage cart driver being sucked into a jet engine — without any damage to the aircraft.  And if the driver happens to be a male under 5’5″, slightly balding, and wearing a tank top, who got sucked into said engine during a full moon, we can code for that too (V97.29&A#gE).   It’s not all bad, as there are actually a few good codes to describe FASCIAL ADHESIONS.  However, there is a major problem with the codes that describe Tendinosis.

Despite huge amounts of research showing that Tendinitis is either rare or does not exist at all (HERE), it is the only diagnosis I find when searching for the proper ICD-10 codes.  I can find hundreds of diagnosis for all kinds of Tendinitis, but none — not a single solitary one —- for any form of Tendinosis.  Is this a big deal, or am I making a mountain out of a mole hill?  Let’s answer that by creating a chart concerning three things we know about Tendinitis, Tendinosis, and the treatment thereof.

So, while I can put down a code that says you were struck by a turtle (W5922XA), are having problems with your in-laws (Z63.1), fell into a bucket of water and drowned (W16.221), have a bizarre personal appearance (R46.1) and were injured while doing arts and crafts (Y93.D), were seriously burned when your water skis caught fire (V91.07XD), had an injurious collision with a spacecraft (W22.02XD: V95.43XS), or suffered a non-venomous insect bite on your anus (S30.867) while attending the opera (Y92.253), I am forced to use Tendinitis codes that were outdated two decades ago to describe my patient’s Tendinosis.