monw: medically obese normal weight — more common than you ever would have believed 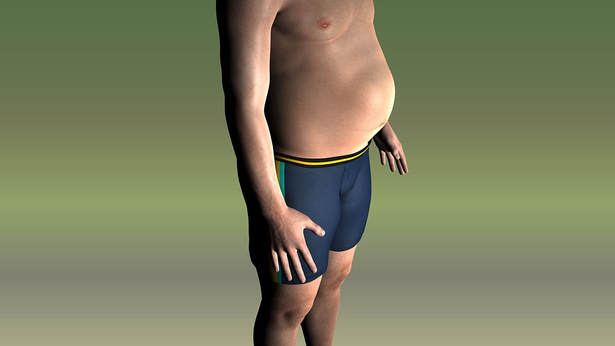 For a very long time we have known that simply looking at where you fall on a height / weight (BMI) chart is not necessarily a great or accurate way to determine how healthy an individual you are, nor can it always tell just how overweight, if any, you might be.  Much of this has to do with a phenomenon known in the medical community as MONW (lay people refer to it as “SKINNY FAT“).

By definition, these individuals are of a “normal” weight, but have many (sometimes all) of the characteristics of the OBESE, including the metabolic and physical abnormalities that are considered “classic” in that population; FAT BELLIES, HIGH BLOOD PRESSURE, METABOLIC SYNDROME, INSULIN RESISTANCE, and abnormal blood lipid levels (HIGH CHOLESTEROL or HIGH TRIGLYCERIDES).  Although this is likely the first time you have heard the term MONW, believe me when I tell you that the concept has been around for a very long time.

Nearly two decades ago, the journal Diabetes published a study (The Metabolically Obese, Normal-Weight Individual Revisited) revealing that, “Nearly 20 years ago, it was suggested that individuals exist who are not obese on the basis of height and weight, but who, like people with overt obesity, are hyperinsulinemic, insulin-resistant, and predisposed to type 2 diabetes, hypertriglyceridemia, and premature coronary heart disease. Since then it has become increasingly clear that such metabolically obese, normal-weight (MONW) individuals are very common in the general population.”   Wow; this problem was known to be common back in the 1970’s.  And despite the fact that we know more about it each year, the problem itself continues to escalate.  Which begs the question of just how common MONW is?

This very question was answered via the title of the September, 2013 issue of the Oxford journal, Clinical Endocrinology (It is Time to Define Metabolically Obese but Normal-Weight Individuals), and  numerous recent studies have chimed in with their two cents.  For instance, in November of 2014, a Polish journal (I’m not going to take the time to spell it out for you — I’m not sure I could) published a study called Incidence of Complex Metabolic Disorders Among Young People: A Preliminary Report.  After looking at 45 university students of normal weight, it was determined that, “occurrence of at least one of ‘classic’ metabolic disorders was indicated in more than half of participants, whereas coexistence three or more these disorders in the same person was observed in 7% of volunteers.”   Holy Toledo!  At least half of these European college students showed that they are at least to some degree, MONW.

Just last month, the Journal of Endocrinological Investigation published a study looking at the effects MONW have on one of the early signs of Type II Diabetes — Insulin Resistance (Association of Metabolic Syndrome Components with Insulin Resistance in Normal Weight Population: The Qazvin Metabolic Diseases Study) showing something similar. In this Iranian study, “The prevalence of MONW was 34 % in men and 40% in women.”  Best guess is that we would see even larger numbers in America if this study were repeated here.

Another Polish study was published last year in their chief endocrinology journal, Endokyinologia Polska  (Accumulation of Abdominal Fat in Relation to Selected Proinflammatory Cytokine Concentrations in Non-Obese Wrocław Inhabitants), which gave us a good idea of how MONW begins (as if we didn’t already have a good idea) — INFLAMMATION.  Whole-body or “systemic” Inflammation is often be measured by something called CRP (C-Reactive Protein).  In this study, 350 people of normal weight were recruited from a local community center to be analyzed using several different parameters.  The conclusions were that, “﻿﻿﻿CRP levels were significantly higher in MONW women than in the control group.  There were correlations between the CRP and BMI, waist to hip ratio, waist circumference, total fat, abdominal fat deposit, and abdominal to gynoidal fat deposit ratio in both sexes﻿﻿﻿“.  Bottom line, if you’re still not sure what Inflammation really is, I am begging you to click the link above.

What about ‘Hardening of the Arteries’ (Arteriosclerosis)?  A brand new study from the Journal of the American College of Nutrition (Vascular Impact of Metabolic Syndrome in Subjects with Normal Weight, Overweight, or Obesity: Is Normal Weight Sufficient for Vascular Health?) covers this topic as well.  In this study, 300 people were divided into four different groups that ran the gamut as far as weight and Metabolic Syndrome are concerned.

The conclusions were simple; “even in patients with normal weight (BMI under 25), the presence of metabolic syndrome was associated with significant deterioration of arterial stiffness.“

After YESTERDAY’S POST, we are more aware than ever that we can’t leave children out of the equation.  A 2012 issue of the World Journal of Clinical Pediatrics reveals that, “frequently the metabolically obese normal-weight (MONW) children are not identified in primary care setting.”  The authors go on to say that, “Because usually the health policies for the prevention of obesity associated disorders in children are based on the screening focused on obese, characterization of the MONW children is an important public health issue. Nonetheless, reports about MONW children are scarce, and its characteristics and related factors are not well determined in childhood.”  In other words, not only are we not screening for this problem in children, it appears to me that it is all but completely off the radar of the average family physician.  As is almost always the case no matter what the problem is, you’ll have to take matters into your own hands — and probably have much better results.

WHAT CAN YOU DO ABOUT MONW?

Facts are nice, but they don’t necessarily help us get where we need to be.  In order to show you what you need to do to solve your metabolic obesity before you become physically obese, you need to understand the results of the biggest study ever done on the subject.  Three years ago next month, the journal Nutrition, Metabolism, and Cardiovascular Diseases published research from South Korean (Characteristics of Diet Patterns in Metabolically Obese, Normal Weight Adults) that was based on data taken from a decade old study similar to our massive NHANES STUDY (Korea National Health and Nutrition Examination Survey III).

After analyzing the blood chemistry and body measurements of over 3,000 adults who were all over 20 years old and of normal weight (BMI’s under 25 but over 18.5), some interesting facts came to light.  “The prevalence of MONW was 14.3%.   The risk of MONW correlated inversely with the frequency of snacking and positively with the type of snack, particularly those with high carbohydrates. A high carbohydrate diet compared to a low carbohydrate diet was positively associated with the risk of MONW, whereas a high protein diet compared to a low protein diet reduced the risk of MONW in females.   This study suggests that a reduced intake of carbohydrates and carbohydrate snacks were associated with a lower prevalence of MONW in females.“

There are a couple things I find particularly interesting about this study.  For starters, the nearly 15% rate of MONW in South Korea was less than what we saw in other studies, but because it is based on data that is well over a decade old, the numbers are undoubtedly skewed.  I’m doubtful there would be any takers on wagering that the numbers have gone down.  Secondly, when you think of Koreans, what do you think of?  Having known several personally, they are typically small (short), petite, and small-boned.  We know, however, that South Korea is rapidly gaining on the United States, meaning their food (potions included) is becoming more Westernized all the time.  But the kicker is the data showing that South Koreans are increasingly LIVING THE HIGH CARB LIFESTYLE.  I am not going to beat a dead horse here, but if you still haven’t got the memo about why the PALEO DIET is the best way of eating for you who are chronically fat, chronically sick, chronically INFLAMED, or dealing with CHRONIC PAIN, make sure to delve into this matter.

Be aware that for those who are physically capable (always check with your doctor before trying anything that might actually help you get well), my ULTIMATE WEIGHT LOSS PLAN is part of the OVERALL PROGRAM for restoring your health and getting you out of pain.