OBLIVIOUS!
NOT ONLY TO THEIR OWN OBESITY,
BUT TO THAT OF THEIR CHILDREN AS WELL 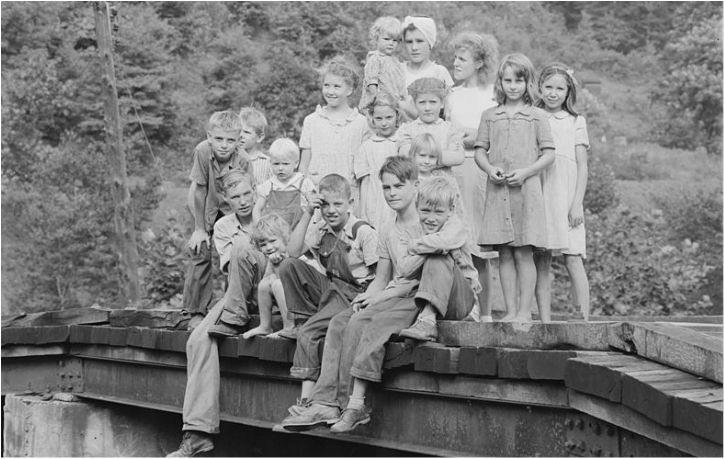 “Whether or not knowledge is reliably power, denial and delusion are reliably disempowering. We do not always fix what we know to be broken, but we virtually never fix what we are overlooking—whether at the personal level or that of our culture.”  From Dr. David Katz brand new editorial on parents’ propensity to ignore or underestimate their children’s obesity.  “Children routinely get what used to be ‘adult onset’ diabetes.” Ibid

“Percentages of parents who inappropriately perceived their overweight child as just about the right weight was 96.6% and 94.9%.  As high as 78.4% of parents perceived their obese child as just about the right weight.  There was a declining tendency among parents to perceive overweight children appropriately.”   From the actual study Katz is dealing with above, in the same issue of the same journal; Childhood Obesity (Change in Misperception of Child’s Body Weight among Parents of American Preschool Children)

If you look at the picture above, it will help you remember (or at least understand) that America did not used to be the land of the large.  In fact, not that long ago, not only was it fairly uncommon to see OBESE adults, seeing an OBESE CHILD was downright rare.  Unfortunately, things have changed.  In a big way (no pun intended).  Today the majority of our population is overweight, and all you have to do is visit a local classroom, movie theater, or swimming pool to see the proof.  But the real evidence is the fact that we are regularly witnessing diseases that were previously thought to occur only in obese adults (Fatty Liver Disease, HIGH BLOOD PRESSURE, HIGH CHOLESTEROL, METABOLIC SYNDROME, TYPE II DIABETES, and any number of others) in children.  Not surprising considering the amount of BELLY FAT they are carrying from very early ages.

There are numerous studies from numerous countries showing the same thing — that not only are kids getting fatter and fatter, but that parents are increasingly turning a blind eye.   Current research shows that parents not only discount or ignore their own weight issues, they are ignoring their kid’s weight issues as well.  Interestingly enough, Dr. David Katz, Director of Yale’s Prevention Research Center and Editor-in-Chief of the journal, Childhood Obesity, just published an editorial (Oblivobesity: Looking Over the Overweight That Parents Keep Overlooking) on this very topic.

Katz begins his editorial by discussing a brand new study from The British Journal of General Practice (Child Obesity Cut-Offs as Derived From Parental Perceptions: Cross-Sectional Questionnaire).   After looking at almost 3,000 obese children and the way their parents viewed their weight, the authors determined that, “Parents become more likely to classify their children as overweight at the 99.7th percentile or above.”  Stop and think about this for a moment.  As fat as our nation’s kids are, unless they are in the top .003% of the heaviest children (the very fattest of the fat), their parents will deny there’s an issue.

Without directly saying so, Katz admits that we have been lying to ourselves about our children’s weights by promoting slogans in the public schools such as, “Okay At Any Size“.  It’s one thing to teach children that “Fat Shaming” is neither nice nor polite, but it’s a whole other thing altogether not to teach kids that being fat is a serious health risk that carries an almost limitless array of devastating / ugly consequences.   For instance, we know that Obesity itself is considered “INFLAMMATORY” and that INFLAMMATION is the root of virtually every disease you can name, including the heavy hitters like those mentioned earlier, as well as CANCER, HEART DISEASE, AUTOIMMUNITY, and a host of others.

Furthermore, studies show that most parents are also underestimating how active their kids are.  Oh; no Dr. Jones….  My little Junior can’t be overweight.  In fact, he is really quite active and plays all day long.  What mom is not telling “Dr. Jones” is that he plays video games all day long, while munching on his favorite snacks.  A 2010 issue of the International Journal of Pediatrics (Parental Misperception of Their Child’s Body Weight Status Impedes the Assessment of the Child’s Lifestyle Behaviors) concluded that, “16%, 55%, and 77% of normal weight, underweight and overweight or obese children were perceived inaccurately, respectively. Erroneous body weight status identification impedes the evaluation of eating habits of all children as well as physical activity and fitness levels of underweight and obese or overweight children. Parental misclassification of the child’s body weight status and lifestyle habits constitutes an unfavorable context for healthy body weight management.”  Sadly enough, part of the problem is that like most parents, most doctors are also turning a blind eye to this problem.

This was seen in the 2011 study published in Pediatrics (Parental Perceptions of Weight Terminology That Providers Use With Youth).  Parents of overweight children from all over the US were quizzed about the potential words their doctor might use to describe the fact that their child was in fact, overweight (extremely obese, high BMI, weight problem, unhealthy weight, weight, heavy, obese, overweight, chubby, and fat were some of the terms used).  On a scale of one to five, “the terms ‘fat,’ ‘obese,’ and ‘extremely obese’ were rated as the most undesirable, stigmatizing, blaming, and least motivating.”   Parents will put their kids on round after round after round of OBESITY-CAUSING ANTIBIOTICS, but they don’t want their doctor telling them their kid is more than just a little chubby.

I have gone as far to tell people that if your kids are fat and you are CHOOSING NOT TO ADDRESS IT, you are condemning them (a difficult word, but true) to a life of physical and emotional misery.  Katz would undoubtedly find me a bit harsh (he believes that this problem can be solved with, “a focus on health, family, and love“) but would probably agree with me in principle.  “Our disinclination to weigh our kids routinely is not sparing them our culture’s unfortunate preoccupation with weight. It is merely distorting their perspective of their own weight, what is healthy, and how to get there from here“.  In this context, there is a normal weight, and here would be overweight or obese.

Katz himself admits that his views on how to fix this are quite possibly a pipe-dream, when he reveals that what he said in the quote at the very top of the page might be one of the many things that sound so good on paper, but don’t always work out so well in real life (Communism is another that comes immediately to mind).  “Knowledge may or may not translate into power. Obliviousness far more reliably translates into powerlessness. Parents cannot ignore the threat of obesity to our children and still hope to fix it.”  There is only one way that parents can even hope to fix this problem — leading from the front.  Unfortunately, here in America most parents are leading from the couch.  If you are 100lbs overweight, can no longer climb a set of stairs without huffing and puffing, are making constant trips to Dairy Queen, and spending your evenings in front of the TV eating chocolate cake and Cheetos, do you really think your kids are going to listen to anything you have to say on the subject?

If you want to see what it’s going to require to take your life back, get your weight down, and beyond that, get healthy; you need to read THIS POST.  And while measuring how overweight one is is certainly a starting point in the discussion of health and sickness, it is by no means the only one — especially when you factor in the people who are either SKINNY FAT or are measuring their health by whether or not they can still get into that old pair of jeans.   But until we can be completely honest with ourselves, nothing is going to change.

Dr. Schierling is licensed chiropractor and world-renowned for intervention with persistent chronic pain. Dr. Schierling focuses on a holistic approach to helping end his patients’ chronic pain that includes Scar Tissue Remodeling Therapy.
All Posts »
PrevPreviouslow back pain and its relationship to your messed up neck
Nextmonw: medically obese normal weight — more common than you ever would have believedNext