politicians are concerned about your children’s health —- (suuuurrrre they are)

PIZZA AS A VEGETABLE? 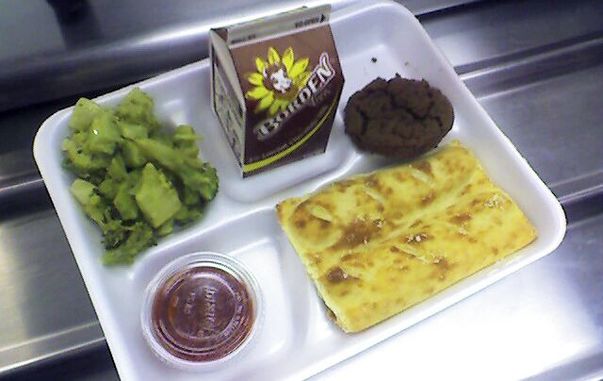 Pic by Beau Wade
Have you ever wondered why so many kids today are not only fat, but just plain unhealthy?  I am pushing 45, but when I was in school, “fat” was uncommon.  Today it’s the norm.  Could school lunches be playing a role in this?  If you understand the relationship between simple carbohydrates, UNCONTROLLED BLOOD SUGAR, and INSULIN, you probably already realize where I am headed with today’s blog article.  Let’s evaluate:
Ah, yes; Pizza.  Who doesn’t like Pizza?  Ask any kid what their favorite food is, and I’ll lay 10 to 1 odds that the answer is “Pizza“.   Well, now you can ignore the fact that the Pizza in the picture above is nothing more than some rolled out dough (white flour) with a little bit of cheese on top.  Thank heaven, Pizza is about to ‘officially‘ become a (gulp) vegetable!  If you are old enough to recall, this episode may remind you of President Ronald Reagan declaring ketchup to be a vegetable clear back in 1982. The more things change, the more they stay the same!

Last year, the Institute of Medicine developed new school meal guidelines for the USDA (an organization which promotes agriculture and the food industry —- not necessarily health), which had been asked by Congress in 2004 to revisit guidelines for making school meals healthier.  Its proposed changes included limiting the number of times starchy high glycemic index “vegetables” (potatoes, corn, lima beans, and peas — a tuber, a grain, and a couple of legumes) could be served per week.  They recommended setting a minimum on how much tomato paste or puree is needed to qualify it as a vegetable serving (currently two tablespoons of sauce on school pizza counts as one serving of veggie). The group also set targets to reduce sodium in school food, and to increase fiber and whole grains by 2014.  The committee included experts in medicine and nutrition, and they received well over a hundred thousand comments in favor of the changes, which were widely hailed as a step in the right direction to address OBESITY, hypertension, and DIABETES —- problems that are epidemic here in America.

Recently, Senators from Colorado and Maine (big potato producing states – don’t know where Idaho was in this discussion) blocked the provisions to limit the number of times starchy vegetables were served per week.  They contended that potatoes are full of potassium and can be very healthy (remember, the USDA already counts potatoes as a serving of vegetable).

In a surprise move earlier this week, the Conference Committee of the House and Senate, which is to reconcile the House and Senate budget bills, met to work out the details and differences of these two bills.  Rather than just making the language related to the Child Nutrition Act and the budget agree, they added language about nutritional guidelines that essentially derailed any hope of nutritional change.  In short, it says no funds can go toward limiting starchy vegetables, setting a minimum on how much tomato paste or puree counts as a vegetable, or setting targets for sodium, as well as continuing to liberally define what “whole grains” are.  Thus, pizza and tater tots with ketchup are still vegetables (3 whole servings of vegetables!), and white flour is still a “whole grain” —– just like it has been.

Nero continues fiddling, while Rome burns to the ground.  And while America’s children continue to get fatter and unhealthier, record profits continue to roll in to an industry that is intimately related to both the Pharmaceutical and Tobacco Industries — The Processed Food Industry.   The biggest winner in this whole twisted shindig is, not surprisingly, the major food corporations that manufacture these frozen “foods” (word used loosely) for schools.

From FoxNews.com: “Food companies that produce frozen pizzas for schools, the salt industry and potato growers requested the changes, and some conservatives in Congress say the federal government shouldn’t be telling children what to eat. Republicans on the House  Appropriations Committee said the changes would ‘prevent overly burdensome and costly regulations and to provide greater flexibility for local school districts to improve the nutritional quality of meals.”  Stop!  Big food companies have spent well over $5.6 million lobbying against the new rules.  And by the way, the Federal Government is already telling children what to eat —- Con Agra Pizza! (Wonder how many of them own Con Agra stock?)

If you want to get an amazing picture of what this kind of food is doing to school children, please do not forget about “PINK SLIME“.  This is the chemically treated that is made of everything but the bone.