vaccine wars are on the horizon 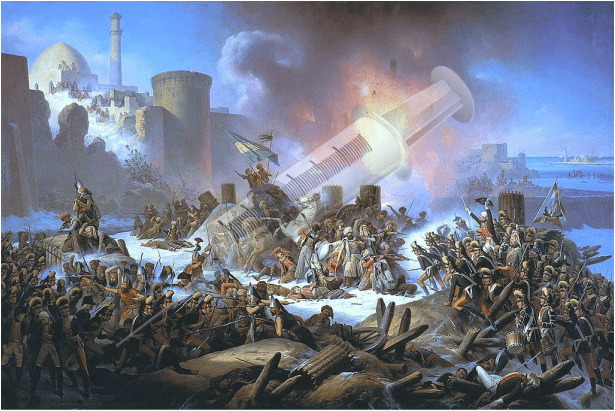 The University of Chicago is home to the National Opinion Research Center (NORAC), which, since 1972, has been conducting the GSS (General Social Survey) that measure American behavior, opinion, and trends.  Their newest poll just came out just came out the other day, and provided some real insight into our collective mindset that could best be described as a severe case of “National Schizophrenia”.

According to their research, what are the main two things that Americans want from our government?  We want more spending and programs, and to pay less tax. In other words, Americans want to have their cake and eat it to.  We want all the goodies that the government can possibly give us, but we want someone else to pay for it (HERE).

It’s a microcosm of one of the biggest dilemmas faced by any government — finding the balance between freedom and order.  Too much freedom and your society devolves into anarchy.  On the other hand, too much order leads you to something that looks more like the regime of, Russia’s Stalin, Cambodia’s Pol Pot, Cuba’s Castro, Venezuela’s Chavez, 1984’s Big Brother, or any of the other nations and their despots that utopians seem to forget about when touting communism as the pinnacle of government (OR HEALTHCARE).

If I’m not mistaken, it was founding Father Ben Franklin who stated, “Those who would give up essential liberty, to purchase a little temporary safety, deserve neither liberty nor safety“.  As a nation, we are giving up our liberties just as fast as we can cash our collective government checks.  But what does this have to do with healthcare?

I have told you in several recent posts that because the government is increasingly paying for your healthcare, they feel they have “earned” a say in determining what healthcare you and your family deserve or don’t deserve —- or should be enticed (or forced) to receive.  Lest you forget, it was Obama Care (ACA) architect, Dr. Ezekiel Emanuel (Rham’s brother), who not only wrote about healthcare rationing for The Atlantic (Why I Hope to Die at 75), but for two different peer-reviewed medical journals as well —- The Lancet (Principles for Allocation of Scarce Medical Interventions) and JAMA (Will Physicians Lead on Controlling Health Care Costs?).

Don’t think for even one second that forced-vaccinations are not on the horizon. When it comes to Big Pharma, there is really only one goal in mind.  Make as much money as humanly possible by any means available — and step on anyone who gets in your way.  Anyone.  Whether these mega-corporations stay within the rules or stray outside the lines has historically not seemed to matter much — especially since they have so much of what we erroneously refer to as “EVIDENCE-BASED MEDICINE” in their back pocket, right along with the alphabet soup of governmental agencies charged in regulating them (HERE or HERE).

I’ve shown you time and time again that VACCINES are not everything they’ve been made out to be — particularly in light of the increased understanding of the “HYGIENE HYPOTHESIS“.  Then there’s the issue of MERCURY, ALUMINUM, and any number of other toxicities (ADJUVANTS) that are actually formulated to be an intentional part of the whole vaccination experience (since germs alone are not powerful enough to create the immune response needed to make antibodies in vaccines, aluminum adjuvants are used to purposefully create inflammation / neuroinflammation).

You could learn more by visiting any number of VACCINATION EDUCATION websites, but the truth is, even our government admits that Vaccines are unsafe.

Even though American business is held to high standards as far liability for their products and services  are concerned (self included), did you realize that vaccine manufacturers are all but totally exempt?  That’s right; thanks to the National Vaccine Injury Act of 1986 (HERE), vaccine manufacturers contribute to a fund specifically set up for vaccine-damaged children.

The law states that, “No vaccine manufacturer shall be liable in a civil action for damages arising from a vaccine-related injury or death associated with the administration of a vaccine after October 1, 1988, if the injury or death resulted from side effects that were unavoidable even though the vaccine was properly prepared and was accompanied by proper directions and warnings.”  How does this all work?  According to information that I cherry-picked from Bloomberg Law…..

“To stabilize the vaccine market and facilitate compensation, Congress enacted the NCVIA in 1986.  The Act establishes a no-fault compensation program ‘designed to work faster and with greater ease than the civil tort system’. A person injured by a vaccine, or his legal guardian, may file a petition for compensation in the United States Court of Federal Claims, naming the Secretary of Health and Human Services as the respondent.  A special master then makes an informal adjudication of the petition within 240 days.

The Court of Federal Claims must review objections to the special master’s decision and enter final judgment under a similarly tight statutory deadline. Fast, informal adjudication is made possible by the Act’s Vaccine Injury Table, which lists the vaccines covered under the Act; describes each vaccine’s compensable, adverse side effects; and indicates how soon after vaccination those side effects should first manifest themselves.”

Parents can forgo using the NCVIA and go after the vaccine manufacturers on their own.  But the way the legislation is put together, good luck with that.  The maximum a vaccine-damaged child can be compensated for injury is $250,000.  Sounds like a lot of money, but with children who are SEVERELY AUTISTIC or worse, it won’t last long once the annual cost of the different types of therapy, special equipment, and educational needs are calculated.

Although the United States Supreme Court actually stated in the case decided in February, 2011 (Bruesewitz v. Wyeth LLC) that vaccines were, “unavoidably unsafe products,” they sided with the drug companies in a 6-2 decision.

Basically, as long as the drug companies put a warning in the vaccine bottle warning of potential side effects, they’re off the hook.  Only about 1/3 of those who apply for NCVIA dollars ever receive anything, and on top of this, we know that at the very most, only 10% of vaccine reactions are ever reported to the proper authorities (as shocking as it sounds, ALL THE STUDIES I’VE SEEN put this number closer to 1%).  For instance, of all the doctors and nurses I know, I have yet to meet one that has reported to VAERS.   This itself brings up an interesting point concerning career choices for scientists.

Couple this with the fact that when doing epidemiological studies that involve reviewing medical records; if the side effect has not been reported to VAERS or written down in a medical chart (doctors rarely do this because it violates their beliefs, not to mention most tend to value having a job), it never happened.  This way vaccines are shown to be every bit as safe as the government is telling us they are. It’s that same phenomenon that allowed me to become the world record holder for consecutively-made free throws (HERE).

Speaking of research, as you might imagine, with an estimated annual expenditure of 100 billion dollars at stake a decade from now (a 333% increase over today’s numbers), the race is on to develop new vaccines.  In the recent past, you’ve seen the development of vaccines for everything from Chicken Pox to Genital Warts (HPV), to Pneumonia, to Meningitis, to SHINGLES to BIRD FLU.  Get ready for Big Pharma to pull out all the stops.  There are currently vaccines in the works for any number of other health problems including……

Time and time again we’ve seen big cities throughout America use hundreds of millions of taxpayer dollars to build the edifices (aka “football stadiums”) where NFL teams play on 8-12 Sunday afternoons per year.  Even though studies show time and time again that this money is not recouped, and the rich get richer riding on the backs of of tax paying work-a-day Joes (or Jolenes).  The same thing is going on with Vaccines, only we are talking now in terms of billions of dollars instead of millions of dollars.

Believe me when I tell you that this is just for starters.  And none of it begins to cover the billions upon billions of tax dollars paid for vaccines in programs such as Medicare, Medicaid, and all the similar, such as the VFC (Vaccines for Children) or the VA.

You won’t hear me arguing that vaccines don’t work (actually you probably will — HERE).  On at least some level, they do what they are supposed to do — they prevent some cases of acute disease.  However, once you begin to understand the the human Immune System has to be “TRAINED“, in order to work properly over the course of one’s life, you start to realize that there is, in the famous words of Paul Harvey, a rrrrrrest of the story.

Allow me to explain.  When you wean your infant off the breast, you must take things slowly.  You start by adding in a bit of blended carrots, beets, or sweet potatoes and then moving on from there.  You don’t start by tossing Junior a Texas Porterhouse.   When it comes to staying healthy, the same thing is true about your Immune System.

In the same way that you can’t have your cake and eat it to, as far as government is concerned (more government spending and lower taxes), neither can you have it in healthcare.  Vaccinations and ANTIBIOTICS might do a good job of taking care of acute diseases, but an understanding of the latest “science” shows you why they will ultimately lead to chronic diseases — the very thing that’s happening here in America (if you don’t understand what “Chronic Conditions” are, HERE and HERE are lists).  I am out of time today, but to grasp what I am talking about, simply follow the “Trained” link in the previous paragraph.

The real question you need to ask yourself today is what you are going to do about this information.  If you are into vaccines, you’ll love what’s going on right now in the media and legislature(s).  My best guess, however, is that even the majority of those who think that vaccines are wonderful will question how many of these they are going to soon be mandated to receive (realize that the government “stick” they threaten you with could be anything — your ability to bank, hold a government job, receive Medicare or other govt benefits, fly on a plane, etc).  But it won’t stop there. Once certain vaccinations are truly made mandatory, it won’t be long until more follow suit.

Remove your VACCINE EXEMPTIONS and you are nothing more than a “COMMODITY” in the eyes of Big Pharma.   They own you.  If you want to continue living a normal life, you’ll do whatever their governmental mouthpieces tell you to do.  Period.  If the government mandates vaccinations for everything mentioned in this post, you’ll have no other choice than to comply.  Their goal is to get you coming and going (HERE).

The war is at our doorsteps folks, and if you are a “freedom of choice” kind of person as it pertains to your family’s healthcare (I realize many would rather peg me as an ‘ANTIVAXXER‘), you had better be educating yourself, your family, your friends, as well as your legislators about the fact that there are two sides of this issue.