why belly fat is so bad

WHY IS BELLY FAT PARTICULARLY BAD, WHAT DOES IT MEAN,
AND WHY IT IS CRITICAL YOU START DOING SOMETHING ABOUT IT TODAY? 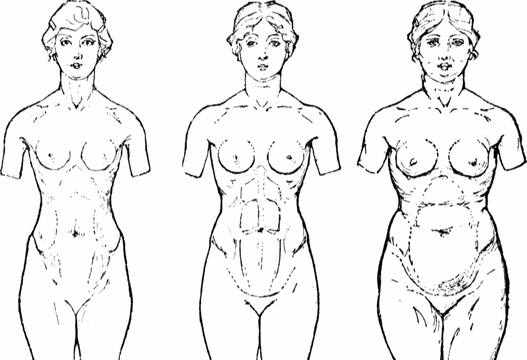 The picture above is a depiction of the various female body types as seen thru the eyes of Georges Hébert — an early pioneer in Physical Education.  The pictures come from a French book called L’éducation Physique Féminine, which was written almost a century ago.  My how things have changed.

It was not that long ago that women hardly ever had “CENTRAL OBESITY” (aka Abdominal Obesity).  Yes, we men have always tended to accumulate fat stores around our waists (the proverbial ‘spare tire’ —- apple shaped), but women have always tended to put weight on in the hip / butt area (pear shaped).  Now it is not only common to see women with Central Obesity, it is shockingly common — even in women of “normal” weight.  These women are often referred to today as “SKINNY FAT” — the topic of yesterday’s post.  The point of this post is not to issue an indictment against those of you who are struggling with this particular problem, but to help you understand why Abdominal Fat is so bad, and why it leads to so many other health problems.  The cool thing is that if you understand what is actually causing you to put weight on around your waist, you can formulate a plan to conquer it.

ABDOMINAL OBESITY means that you have too much “Viceral Fat”.  Don’t get me wrong; we all require some fat around our Vicera in order to be healthy.  But once you understand that the word “Vicera” means organs, and that Viceral Fat is the fat that surrounds (and potentially entombs) your organs, you will begin to understand why Central Obesity is such a serious problem — a killer.

When a person has large amounts of fat engulfing their organs, that fat tends to create responses in the rest of the body (particularly the ENDOCRINE SYSTEM) that can never really keep up with what is being demanded of it.  Although the organs (pancreas, liver, ADRENAL GLANDS, etc) are scrambling to CONTROL BLOOD SUGAR LEVELS, they eventually FALL BEHIND.  As organs fail to keep up, weight gain can end up like a snowball rolling downhill — picking up momentum and feeding itself as it goes.  But be warned…. not all weight gain is equal.  Some is worse than others.

WHY ABDOMINAL OBESITY IS WORSE
THAN GENERALIZED OBESITY

In the early 1980’s, researchers began noticing that there was an important distinction between abdominal fat and the subcutaneous fat that all of us have underneath our skin.  They realized that the more abdominal fat a person carried, the more likely they were to have DIABETES (decreased sensitivity to insulin), heart disease, strokes, high blood pressure, HIGH CHOLESTEROL, and high triglycerides.  They began to realize that Abdominal Obesity was a different kind of animal than General Obesity.

As the American diet has gotten worse —– based more and more on processed grains, TRANS FATS, chemicals, and sugar —- rates of Central Obesity have skyrocketed.   Yesterday’s blog proved that at least 7 of 10 American adults are overweight, with about half of those being OBESE.  It gets worse.  For the over-50 crowd, 50% of the men and 70% of the women are not only obese, they meet the criteria for Central Obesity.  What are those criteria?

In the picture on the left, we see a woman with normal sized hips and waist.  If we take the ratio of the waist to the hips (WHR — Waist Hip Ratio), we should see about a .6 or .7 for women, and about .9 for men.  Anything over .85 for women and .9 for men is considered to be Central Obesity.

WHAT DOES CENTRAL OBESITY
(A HIGH WHR) REALLY MEAN?

If you are a male with Central Obesity — the proverbial pot belly — odds are that you simply need to get back on the wagon and lose some weight.  If you are a female with Abdominal Obesity, you need to make some serious changes to your life.  For one, it is important to realize that you are probably stressed out.  Adrenally stressed out that is.

Cortisol (aka Hydrocortisone) is your body’s chief stress hormone, and  is made by by your adrenal glands in response to stress.  Bear in mind that this stress can come in many forms; emotional, physical, dietary, etc.  According to a popular online encyclopedia, the chief functions of Cortisol are to, “increase blood sugar through gluconeogenesis; [and] suppress the immune system….”  Did you catch that?  Cortisol is an Immune System Suppressor that raises blood sugar via gluconeogenesis (creating sugar from muscle tissue or fat stores).  Although creating sugar from fat might sound like a wonderful thing, in many cases it is not.

If a person already has high blood sugar levels and gets a subsequent boost in blood sugar, they are going right back into storage mode unless they burn it for energy.  This is unlikely.  Since these folks are already fighting Central Obesity, the new sugar they create from metabolizing fat is simply re-stored as fat.  Only this time it will be stored as belly fat.  If occurring on a regular basis, this process will literally exhaust your body.  This is why it is called Adrenal Fatigue and is intimately related to Fibromyalgia (ADRENAL FATIGUE OR FIBROMYALGIA?).  Also be aware that HIGH FRUCTOSE CORN SYRUP —- the sweetener most commonly used for practically all modern processed foods —– is more associated with Belly Fat than other sugars — far more associated.

Of course there are the health problems I listed earlier in the post.  However, it don’t stop there.  There are a host of physical ailments that are being directly tied to Central Obesity.  Some of them include……

Although Obesity is bad, Central Obesity is doubly bad.  If you want to live a long, enjoyable, life, and be there for your children and grandchildren, you need to do what it takes to get this problem under control.  Fortunately I have created a plan for you.  All you have to do is follow the information on THESE POSTS.  Granted, it’s a ton of information.  But there is no way to effectively lose weight, get healthy, and stay that way for life unless you know what made you fat in the first place.  Knowledge is power, and if you will follow the advice on my blog, virtually everyone reading this post will know what it takes to get a handle on your Central Obesity.  Just remember; the choice is yours.

Dr. Schierling is licensed chiropractor and world-renowned for intervention with persistent chronic pain. Dr. Schierling focuses on a holistic approach to helping end his patients’ chronic pain that includes Scar Tissue Remodeling Therapy.
All Posts »
PrevPrevioustwo decades of piriformis syndrome solved
Nextneuropathy and the link to both blood sugar and glutenNext