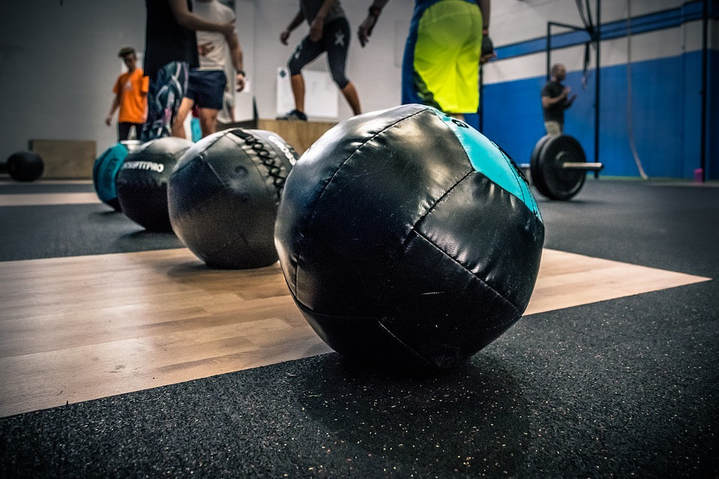 Moni Mckein – A Coruna/Spain – Pixabay
Although Jane Fonda is usually the one credited with starting the whole “no pain; no gain” mantra in her early 80’s leg-warmer workout videos, I would guess it’s been around much longer than that.   While I totally believe her statement to be true, everything hinges on one’s definition of the word pain.   Another of Fonda’s quotes from her videos (feel the burn), helps clarify this concept’s original meaning.  Suffice it to say that her point was to work through the “burn” —- not to train until you permanently damage your muscles.  Unfortunately, there are some who actually advocate this sort of thing.  And although there are many different kinds of “extreme athletes” today, some of the most extreme seem to come out of Crossfit movement.

Let me start by saying that I have never officially been part of a CrossFit program or gym.  However, because I have a gym in the basement of my clinic, I am able to incorporate many of their training methods into my workouts.  A few of the things my son and I do that could be considered “CrossFit-like” are KETTLEBELL SWINGS, all sorts of Burpees, several novel kinds of pushups and pullups, and pounding a tire with a sledge hammer as well as two five pound hammers (one for each hand).  I am also getting ready to put up some rings.

I am sold on CrossFit’s typically short duration, high intensity style of training, as well as the wide variety of atypical exercises.  But, with any sort of physical training (running, powerlifting, swimming, gymnastics, MMA, etc, etc, etc), people can push things beyond what their body can withstand and repair —- sometimes far beyond.  It has taken me a lot of years to figure out that when it comes to getting in shape, sometimes less is more.  I can remember Joe Wieder writing about over-training back in early 1980’s issues of Muscle & Fitness.  Although I did not “get it” then, I now understand just how easy is is to “over-train” and end up wearing your body down instead of building it up.  Speaking of over-training; a few days ago someone sent me a link to a recent article called, CrossFit’s Dirty Little Secret.  The article, written by a Physical Therapist, was about the, “troubling trend among CrossFitters”.  And just what is this troubling trend?  Have any of you heard of something called Rhabdomyolysis?

I’ll get to exactly what Rhabdomyolysis is momentarily, but the thing to remember is that none of this is new information.  For years, newspapers and magazines have been carrying headlines touting the dangers of CrossFit such as, “Getting Fit, Even if it Kills you” (2005, New York Times), Inside the Cult of CrossFit (2011 Men’s Health), and “Lawsuit Alleges CrossFit Workout Damaging” (2008, Navy Times).  There have even been a couple articles on the topic of Rhabdo by CrossFit’s founder himself, Greg Glassman.  I am not going to get into depth here (read the articles if you want), but if you are a novice who is trying to do advanced workouts; or if you are pushing your body to the realm of stupidity, you are headed for a breakdown — probably sooner than later.  It is only common sense to workout within your body’s limits.  I’m not in terrible shape now, and I used to be in really good shape.   However, I would not even think of doing some of the workouts that I have seen others do.   Again, know your limitations, and exercise your brain before exercising your body.

We live in a culture of excess.  Americans take something like two thirds of the world’s medications even though we are less than 5% of the world’s population.  We act like every meal is going to be our last (just look at OBESITY RATES here in America — nearly 40% of the adult population).   And when we do exercise, some of us really exercise.  The hottest video workouts today are things like P-90X, Insanity, and other super high intensity routines, with every new video being touted as more intense than the one before it.  Unfortunately, most of these could in no ways be considered to be “low duration”.  Low Duration Exercise.  It is one of the things that drew me to the concept of CrossFit in the first place (many of their workouts last no more than 15 minutes).

The last several years have seen my workouts get progressively shorter.  Why?   Virtually all the peer-reviewed literature says that this is the best way to train (here are several articles on CARDIO TRAINING -vs- STRENGTH TRAINING).   One of the first books I read on the subject (Bill Phillip’s Body for Life), was talking about high intensity / low duration exercise a decade and a half ago.  I even remember reading Arthur Jones talking about the famous “Colorado Experiment” with the recently deceased CASEY VIATOR back when I was in college, but blew it off assuming that his gains were all steroid-related.  I guess the problem is that just like the disagreement we have over what “no pain, no gain,” really means, we cannot seem to agree what either ‘high intensity‘ or ‘low duration’ really mean either.  But let’s get back to the real reason you are reading this post —- Rhabdo.

WHAT IS RHABDOMYOLYSIS
AND WHAT CAUSES IT?

Allow me to break down the word “Rhabdomyolysis” for you.  Rhabdo = “striped”, Myo = “muscle”, and lysis = “to break or separate”.  Thus, Rhabdomyolysis is the breakdown of striped (skeletal) muscle.  , now let’s talk about what causes it.  Although it is quite possible to induce Rhabdomyolysis via working out really really hard (such as in CrossFit), there is another far more common way to develop this problem.  Although Rhabdo can occur from injuries, overworking or over-training muscles, as well as a host of other reasons, the number one on the list is STATIN DRUGS — by a landslide (HERE).  For example; I do not personally know anyone who has ever developed Rhabdo from working out too hard.  But I know scores of people who have had varying degrees of muscle pain and weakness as the direct result of taking Anti-Cholesterol Meds.

Rhabdomyolysis can occur when overworked, abused, traumatized, or poisoned skeletal muscle rapidly undergoes lysis.  The muscles cells rupture their contents as the tissue is broken down into its components. This releases muscle cells and their constituent parts into the bloodstream.  Certain byproducts of this process such as the oxygen-carrying protein myoglobin, can damage the kidneys to the extent that dialysis is required for survival.   But short of complete kidney failure, Rhabdo can cause permanent muscle damage as well a host of other nasty problems.  So; how would you have any idea you might be dealing with Rhabdomyolysis?  Just watch for the signs.

But let’s go one better.  Wouldn’t it be nicer to altogether avoid Rhabdo in the first place?  With some common sense, it can be done.  Here are a few of the steps for avoiding Rhabdomyolysis.

Should you stop taking Statin Drugs?  Only you and your doctor can answer that question.  However, once you learn that CONTROLLING YOUR BLOOD SUGAR is the best way to deal with all sorts of blood lipid issues, dropping the dangerous drug might just be an option for you (HERE is more information on the blood sugar / cholesterol link with Dr. Oz, and HERE are some diet tips).   Should you do nothing but wimpy workouts?  No way Jose!  Even the intense CrossFit workouts can fantastic when done correctly.  Never let your trainer or instructor push you into something you are not comfortable with.  Use some good old fashioned common sense when you are pushing things to the max.