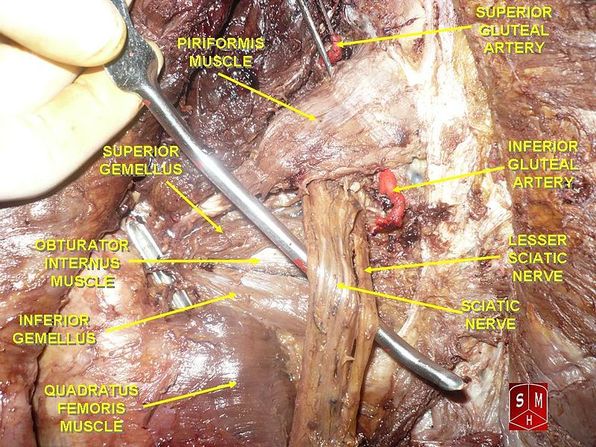 ACTUAL PHOTO OF A (LEFT) PIRIFORMIS MUSCLE WITH SCIATIC NERVE UNDERNEATH

When you read the vast amount of material that I have written about diagnostic imaging of PIRIFORMIS SYNDROME, you will note that I have said repeatedly that it cannot be done.  This is not entirely true.  While standard diagnostic imaging (CT / MRI, Diagnostic Ultrasound, etc) can show the Piriformis Muscle itself, it so rarely shows the compression involved with Piriformis Syndrome, that we would not be inaccurate to say that it simply cannot be imaged.  Why not?   Why won’t a regular MRI that is supposed to show everything reveal Piriformis Syndrome.   It has to do with the fact that these tests mentioned above do such a poor job of IMAGING FASCIA and imaging nerves; and Piriformis Syndrome typically involves at least some degree of compression / irritation of the Sciatic Nerve (the big nerve that runs down the legs).  However, there is a new technology out there that does have the ability to image nerves.  It is called Magnetic Resonance Neurography (MRN).
Standard MRI can only show us the major portions of the body’s anatomy, whether that anatomy is normal or abnormal.  The problem with just showing the “major” anatomy is that even though things like DISC HERNIATIONS, SPINAL STENOSIS, SPINAL DEGENERATION, FACET SYNDROME, and all sorts of other disc “pathologies” which cause Sciatica can be seen using standard MRI, it is usually impossible to know if the specific pathology you are looking at is actually the underlying cause of the person’s pain / problem.  This is why study after study after study after study says that it is almost impossible to correlate the sort of pathological findings listed above with a person’s pain.  The truth is that some of these findings like DEGENERATIVE JOINT DISEASE are so incredibly common, they are considered part of the normal aging process (this is both true and false at the same time).  Furthermore, you do not need an MRI to see this sort of degeneration.  X-rays actually do a better job of showing it than does MRI.  And in the words of the world’s preeminent Sports Surgeon, James Andrews, this simple fact has turned most MRI’s into what he refers to as “high priced artwork“.  Sure the MRI reveals that you have a Disc Herniation.  But trying to correlate this Disc Herniation with a person’s symptoms is much more difficult than any doctor will ever admit to their patients.  This is because 50-70% of the adult American population has Disc Herniations that show up on MRI, yet they are not aware of because they have no pain (HERE).

Although the use of Magnetic Resonance Neurography (MRN) is increasing in America, most insurance companies classify this test as “experimental” and will not reimburse for it.  Because of this, there are not a lot of facilities with the equipment to perform these tests.  This is unfortunate, because it is really the only form of diagnostic imaging that has the potential to actually show nerve compression in cases of Piriformis Syndrome (certain kinds of EMG’s can also prove Piriformis Syndrome, although they do not “image” the problem).  And MRN’s are in no way considered fool proof.  I have treated several patients with chronic long-standing buttock pain and sciatica that have had MRN results that were negative —- despite the obvious, classic, and unrelenting symptoms of Piriformis Syndrome.

Probably the most well-known doctor in the field of using MRN for detecting Piriformis Syndrome is Arron Filler.   In a ground-breaking study done while working with UCLA’s Mount Sinai Medical Center (2005), Filler showed that there are about 30 million MRI’s done in America each year.   About 1.5 million of these are done because of Sciatica, and about one fifth of these folks (300,000) end up having spinal surgery.  Under a very liberal definition of “success“, about one third of these SPINAL SURGERIES FAIL.  The same study of 240 individuals with Sciatica concluded that Piriformis Syndrome and not Disc Problems is the number one cause of that Sciatica (HERE).

What is the drawback with MRN?  Cost is a big factor.  An MRN study typically includes standard MRI images along with the neurographic images .  On top of that, MRN requires machines that contain very high powered magnets.  Another drawback is the fact that MRN’s must be performed in “The Tube”.  In other words, you cannot have an MRN done on an “open” MRI machine.

Dr. Aaron Filler who co-developed MRN technology back in 1992 also happens to be the “go-to” person today for MRN imaging of Piriformis Syndrome.  What do I know about the treatments that Dr. Filler is doing for Piriformis Syndrome?  Not a lot.  What I can tell you is that people either think very highly of him or they have no use for him at all —- there seems to be no middle ground.   I have personally treated several people who have been to him, and were not helped much by what he did.  I think it is a case where the diagnostic part of what he is doing is quite valuable, but unfortunately, the medical treatment of Piriformis Syndrome is downright tricky — and potentially hazardous.   Although there are some success stories out there, surgeries to release the Piriformis Muscle are fraught with nightmare scenarios, and injections are not only dangerous and DEGENERATIVE, they never seem to work over the long haul —- ask anyone who has gone that route.  Short term relief is about the best you can hope for — but at what cost?

What do I recommend?   In most cases, I would start with Tissue Remodeling.  Because dealing with CHRONIC PAIN SYNDROMES caused by microscopic scar tissue it is one of the major thrusts of my practice, it sounds sort of self-promoting, doesn’t it?  I guess in a way it is, but it also happens to be the thing that makes the most sense — starting with the least invasive, least expensive methods of treatment and working your way up from there.  If you have watched many of my Video Testimonials, you already know that I am getting good results with lots (certainly not all) of my patients with hardcore Piriformis Syndrome — many of these cases being long-standing (decades).

However, people also realize that I am not going to post testimonials from patients who do not get the results they were looking for.  I’m no different than anyone else.  I tout my successes and not my failures.   As much as I would like to tell you that I can fix all cases of Piriformis Syndrome, plain and simply stated, I can’t —- and I do not want to ever lead people to think otherwise (HERE).   And the most frustrating part of all of it is that it is difficult (“impossible” might be a more accurate word) to really tell from a phone consultation or emailed history who I can help.  Although it is much easier to weed out those people whom I know I cannot help, trying to determine whom I can help is much more difficult.  No one has come up with any sort of objective criteria for predetermining who will respond to this sort of treatment and who won’t (although I am continually working on it).

However, some of these people respond.  And unless you have had an MRN, you will not likely know whether you are one of those people who was born with this sort of anomaly.  What we do know is that there are a WIDE VARIETY OF CAUSES of this thing that we call Piriformis Syndrome.   Almost all of these people develop their Piriformis Syndrome in adulthood (some even in later adulthood), and most (but not all) cannot even relate it to anything that happened to them — a certain incident or specific injury.  It just happens — either all at once or gradually over time.

The crazy part of it all is how physically fit some of these people are that I treat.  Maybe it’s just the sort of Piriformis Syndrome sufferers that I attract —- patients (many are athletes) who are highly motivated to get better without surgery so they can get back to their running / lifting / biking / hiking / etc.  This group of people tends to really grasp the fact that Piriformis Release Surgery is such a crap-shoot —- something that a significant percentage of the people who go through with, end up regretting.   I am going to do a blog interview with a rarity —- a person who has done great with the Piriformis Release Surgery.

I never set out to be “The Piriformis Syndrome Doctor”.  And no; although I see an awful lot of people with Piriformis Syndrome, it is not even the largest thrust of my practice —- it’s just one of many things that I see.  I deal with all sorts of Pain syndromes that are caused by FASCIAL ADHESIONS & TENDINOSIS (as well as microscopic scarring of other Connective Tissues).  It’s just that I recognized early in my career that far too many people with sciatica had what I still call “butt-based” sciatica that adjustments to the lumbar spine did not seem to improve — at least on a long-term basis.  As the word spread about what I am doing in Mountain View, we have more and more people traveling to see us.  This is probably a smart move on the part of most patients who have been struggling with Piriformis Syndrome for a significant amount of time, and been through all the tests that their doctors have offered them.   Some of the advantages of trying us first includes…..