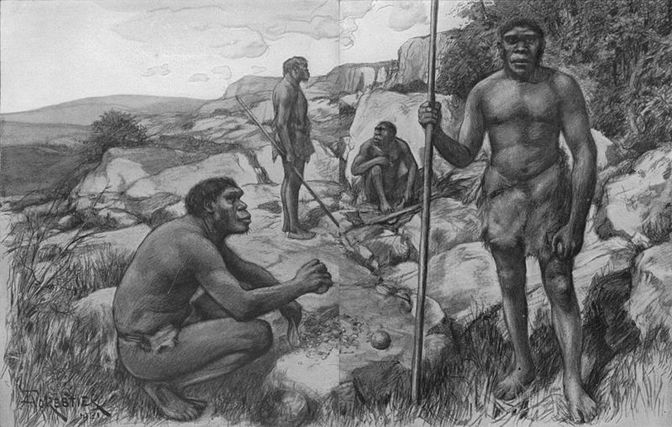 I’m not quite sure how much ‘proof‘ I can personally provide you in this age of EVIDENCE-BASED MEDICINE, but I’ll give it a whirl.  Although there is plenty of peer-reviewed research behind the Paleo Diet (HERE is one such study), the evidence I am going to provide you with today is purely anecdotal — kind of like the evidence for the “EVOLUTIONARY THROWBACKS” above.  Not only have I seen amazing changes personally while on the ﻿PALEO DIET﻿, I have seen these changes occur in my patients as well (HERE and HERE are patient testimonials bearing this out).  Like I said, it’s classic anecdotal evidence.

Anecdotal evidence is not a bad thing, but it is not the proverbial ‘gold standard’ of medical research (blind, double-blind, placebo controlled).  Not that this really matters most of the time (HERE), but it sounds good in theory.   Today, I want to share two fascinating stories with you —- stories that stuck in my mind, but did not make sense to me initially.  However, after mulling them over in my mind for a number of years, they both make a heck of a lot of sense in light of what I have learned during that time.  The first has to do with one of our local school principals.

LOREN SMITH (a local CURRENT RIVER kind of guy) had talked to me a number of years ago about his experience with the Master’s Cleanse (aka, the lemonade cleanse).  The cleanse is simple; relying on lemonade made with freshly-squeezed organic lemons, “seasoned” with cayenne pepper (to tolerance), and sweetened with a bit of grade B maple syrup.  The theory is that 10 days of this (along with a glass of salt water in the morning) will help you to slough off the mucoid plaques that progressively coat the intestinal walls due to the SAD (Standard American Diet).  Loren told me that every time he did the cleanse, within a couple days of starting, all his aches and pains from years of sports and hard work would simply vanish.  I myself noticed the same thing on the occasions that I have done the cleanse (even though I have done several cleanses, I still prefer the Master’s Cleanse over anything from the health food store).  The second piece of evidence has to do with something I have witnessed on several occasions.

Chronically sick patients (particularly those with Inflammatory Bowel Diseases or IBS) will often improve simply from going in for a test (upper GI, lower GI, MRI, etc).  The thing that’s sort of interesting about this is that it’s not like these people are being treated in any form or fashion.  They are simply being tested (some of these tests require them not to eat for as long as 24 hours) — and will often report short-term improvement on the heels of these tests.  What gives?

It turns out that the common denominator in these cases is that the individuals are not eating.  In other words, health improvements are seen in the absence of food.  What does this likely mean?  Plainly stated, it means that something in their diet is making these folks sick, and when it is removed, they get better —- seemingly rather quickly.  Once you start to understand how MOST DISEASE PROCESSES START, this will make even more sense.

When people with chronic illness or CHRONIC PAIN stop eating foods that they are having Immune System reactions to (GLUTEN and SUGAR are two common ones), the body slows down the INFLAMMATION, and the GUT BECOMES LESS LEAKY.  The resulting ‘squelching‘ of the body’s Inflammatory Response frequently means a subsequent ‘squelching‘ of AUTOIMMUNE RESPONSES.  It only makes sense when you understand what a Paleo Diet really is, and how it works (HERE).  Other diets (VEGAN for instance), have the potential to do the same thing.  Although some people can get good results following a grain-free vegan diet, many people fail (or even deteriorate) due to a lack of quality protein.  If you want to learn more about dealing with chronic illness and / or WEIGHT LOSS (whichever you need), read the book I should have written, IT STARTS WITH FOOD.

Dr. Schierling is licensed chiropractor and world-renowned for intervention with persistent chronic pain. Dr. Schierling focuses on a holistic approach to helping end his patients’ chronic pain that includes Scar Tissue Remodeling Therapy.
All Posts »
PrevPreviousantibiotic use in animals is increasing
Nexta follow-up on db’s caseNext