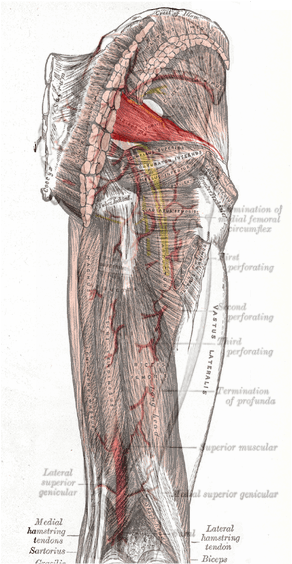 Although there are a host of “causes” of Piriformis Syndrome, it usually involves some sort of tissue binding or restriction.  What’s really crazy is that this binding / restriction can come from almost anywhere in the pelvis.  Allow me to explain.  Yesterday’s early morning patient was a person that I had seen a few times previously for buttock pain and SCIATICA.  The last time I saw him, we really had a breakthrough.  As I worked and he talked, he told me something that had not been revealed during our initial exam / consult.  Nearly a decade ago, he had done an extremely challenging leg workout, then turned around and played in a big softball tourney — something he had not done in years.  He ended up pulling a QUAD / HIP FLEXOR.

Although his Hip Flexor tested out equal as far as its range of motion when compared to the opposite side, after finding quantum amounts of TENDINOSIS and FASCIAL ADHESIONS, and subsequently breaking it up, his severe buttock pain diminished greatly.  For the record, he also had severe THORACOLUMBAR FASCIAL TEARS (I call them tears because they were visible to the naked eye prior to treatment).